"The X-37B continues to demonstrate the importance of a reusable spaceplane. Each successive mission advances our nation's space capabilities."

And those capabilities would be … what? Air Force secretary Barbara Barrett didn’t give that information in her announcement that the super-secret X-37B spaceplane landed in Florida on October 27 at 3:51 am ET after spending a record 780 days in Earth orbit doing … what? Barrett didn’t answer that question either, which is not surprising since it has gone unanswered before, during and after all five secret missions of the Orbital Test Vehicle program.

“We’re doing experimentation. You know that, publicly we’ve said that. We’re doing experimentation predominantly to get after what I’ll say is buying down risks for things that can be very expensive in space, and get a good solid understanding of how one would prepare ourselves for either a large buy, an expensive buy if you will, or in this case, get on with how one want to operate in the future.”

Well, that explains … nothing. While being equally evasive about the schedule for the long-awaited first flight of the B-21 very-long-range stealth bomber (the proposed December 2021 date is out), Randall Walden, director of the Air Force Rapid Capabilities Office (AFRCO) who was speaking at an Air Force association breakfast, said nothing of substance about the X-37B, which at least has flown. When it landed, he reiterated about the “Air Force Research Laboratory experiments” and dis note that this X-37B provided “a ride for small satellites” but did not disclose their purposes. 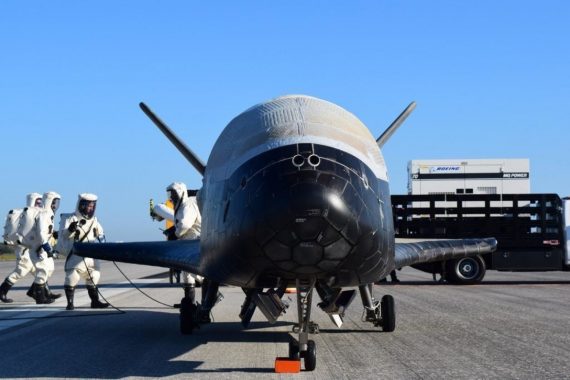 What about the Space Force?

"The safe return of this spacecraft, after breaking its own endurance record, is the result of the innovative partnership between Government and Industry. The sky is no longer the limit for the Air Force and, if Congress approves, the U.S. Space Force."

Air Force Chief of Staff Gen. David L. Goldfein went all Buzz Lightyear in his announcement of the X-27B’s safe return and future, but didn’t add anything new either.

What about SpaceX, whose Falcon 9 rocket launched this X-37B?

“SpaceX’s Falcon 9 rocket launched X-37B on its fifth mission – OTV-5 – on September 7th, 2017, just a handful of months after successfully launching a similarly secretive mission (NROL-76) for the National Reconnaissance Office (NRO) and a handful of months prior to the company’s even more mysterious ‘Zuma’ launch. SpaceX’s OTV-5 launch had to race against the clock to beat Hurricane Irma’s forecasted landfall and the company managed to launch just a few days prior, while the booster’s post-landing operations had to be similarly expedited.”

As Teslarati points out, SpaceX is heavily involved in secret missions and has no interest in disclosing anything. It’s also possible that SpaceX is busy readying its reusable rocket for the next launch – scheduled for 2020 – of the X-37B reusable spacecraft.

Could he have been a secret Air Force spokesperson?