There are few areas of the world that invoke the true image of a lost world that time has forgotten as fully as the rugged island nation of Papua New Guinea. Lying in the southwestern Pacific ocean and comprising one half of the larger landmass of New Guinea, the country is largely undeveloped and covered with uncharted wilderness, with many of the residents living in rural villages and others comprising the many elusive tribes that lurk here. This is a wild land once known for cannibalism and head hunting, a truly lost world ensconced by impenetrable rain forests for as far as the eye can see. Here there are said to roam modern day dinosaurs, and this is a look at some of the stranger recent reports.

One veritable hotspot of such sightings comes form a remote island here, where a creature was seen in the murky water at a place called Ambungi Island, a sparsely inhabited patch of land which lies just south of the south coast of West New Britain and which is home to only about 90 people, making it pretty remote, to say the least. In 1995 a local man named Alphones Likky was out spearfishing just offshore in shallow water when he heard something very large splash behind him and crash into the coral reef nearby. The startled witness looked to see a fully submerged “dinosaur,” with a long neck and tail, short forelimbs, and muscular hind limbs topped with webbed feet like those of a duck. The beast’s head was smallish and shaped somewhat like a snake’s, and there were dermal ridges down the creature’s back and tail, with the entire length estimated as being 4 meters. It was described as swimming at a slow, leisurely pace completely underwater, making its way to the entrance of an underwater cave before slipping down into the gloom. The terrified spear fisherman claimed he had quickly swum up back to his canoe and got out of there as fast as he could. What sort of creature was this? 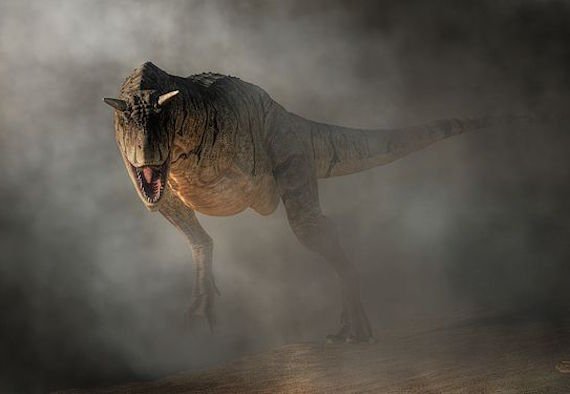 In 1999 there was an unusual sighting reported in the same general region by a woman living on the south side of Ambungi Island as she was leisurely working out in her quiet garden. She claims that she saw a bipedal reptilian beast, which was about 3 meters long and looked very much like a T-rex. The witness was interviewed by Australian researcher Brian Irwin, who has spent years studying reports of dinosaurs in Papua New Guinea, and he wrote of the encounter:

The colour of the animal’s skin was reddish-brown and white around the breast area. The texture of the skin appeared smooth and dermal frills were seen only on the tail. The animal moved slowly with its neck nearly vertical and Alice saw it feeding on a plant with a rough-textured leaf. Alice then observed the animal turn around and walk to a small cliff, where it dived into the sea. During this time, the creature was followed at a distance and did not seem aware of Alice’s presence. After the animal had left the garden, Alice observed the five-toed footprints in the ground and later showed these footprints to other residents of Ambungi Island. The animal may have entered the garden from the beach on the western side of the island during the night.

Ambungi Island has seemed to be a hotspot of living dinosaur sightings well up into later years, with another report coming from Irwin, who interviewed a witness who claims to have seen perhaps the same type of creature in 2005. The witness said that he had seen a bipedal “dinosaur” with a long tail and a long neck, and which measured an estimated 10–15 metres in length. The beast was said to have had an appearance described as being quite like a “‘very large wallaby and having a head like a turtle’s head.” It purportedly had shiny brown skin and stood “as high as a house.” The hulking creature apparently was observed peacefully eating vegetation for some time before it made its way to the water and swam off. A similar creature was seen at around the same time swimming out in the water with its head above water, and yet on another occasion by two village women who claimed to have seen it from a boat as it stood at some rocks at the bottom of a remote seaside cliff, and the creature has allegedly been seen on nearby Alage Island as well. In 2007 there was another sighting of a prehistoric looking beast at Ambungi Island, when resident Jasinta Pitim claims he saw a long necked beast with dermal frills and skin looking like that of a crocodile sleeping on some rocks on the south side of the island. She ran back to fetch her husband and he apparently saw it too. 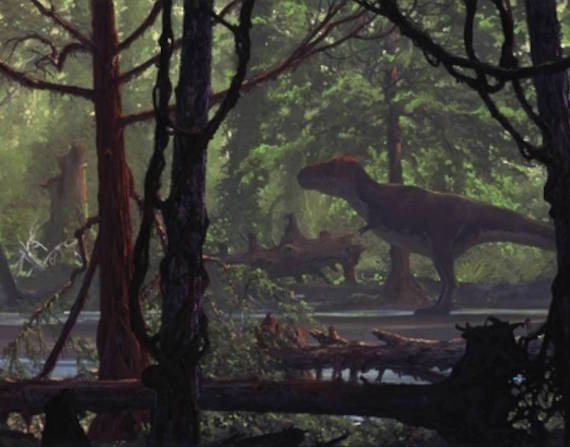 In 2004, a group of three adults and some children were out on an uninhabited island called Dililo Island, not far at all from Ambungi Island, diving for fish when they had their own bizarre encounter that would leave them speechless. As they were diving, they noticed that the fish seemed to have been spooked away and scattered by an unseen something, and they exited the water to try and figure out what was going on. That was when they noticed a long-necked 20 meter long reptilian beast swimming through the water, with an oval shaped head like a lizard, huge eyes, and what looked like a distinct series of dermal ridges that looked “like a saw” down its back. It purportedly swam along at a leisurely pace before sinking out of view and disappearing. It is interesting that in many of the reports from the area the dinosaur seems to be at least partially aquatic in nature.

Supposed these strange living dinosaurs have been spotted in many other areas of Papua New Guinea as well, and some of these sightings have been made at the country’s largest lake, Lake Murray. Surrounded by dense jungle that is nearly impenetrable in some places, its shores populated by little contacted native tribes, it looks very much like a lost world one would expect to be inhabited by dinosaurs, and according to some accounts, perhaps it is. In December of 1999, a group of villagers making their way across the remote lake in a canoe were startled to see what they described as a dinosaur wading about in shallow water near one of the lake’s islands. The bipedal creature was said to be around 20-feet high and 6-feet wide, with two squat, thick rear legs like tree trunks, two smaller forelimbs, a long neck and a long slender tail, and skin reminiscent of that of a crocodile. The most fearsome aspect was the creature’s head, which was said to look somewhat cow-like, with a huge mouth filled with teeth “as long as a man’s fingers.”

The witnesses watched the monstrous thing wade in a shallow pool until it ran off into the underbrush to leave them stunned. The very next day, two wayward missionaries in the area saw what seems to have been the same beast right near where it had been seen by the tribesmen. Curious as to what they had seen, the missionaries then allegedly went back to the region and asked around to the tribes of the area, gathering many sightings of the “dinosaur” from terrified locals, and upon showing books on dinosaurs to these frightened people, many of them purportedly pointed out bipedal Theropod dinosaurs such as the T-rex as being what they had seen. 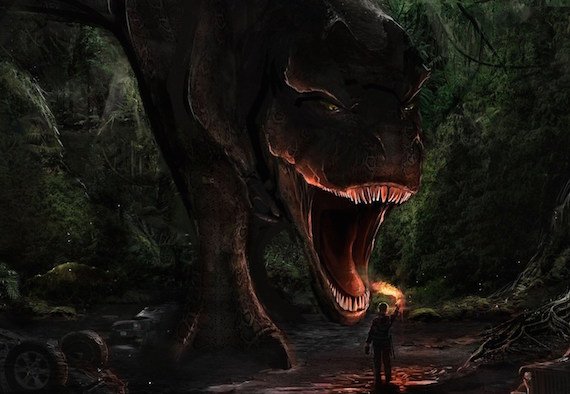 A spectacular case came into the news in 2004 from the island province of East New Britain, just outside the provincial capital Kokopo, where villagers said they were being terrorized by a 3 meter tall gray monster with a head like a dog and a tail like a crocodile. Its lair was said to be swampland that had reclaimed the ruins of the town of Rabaul, which was buried by a volcanic eruption in 1994. Apparently the marauding beast was responsible for scaring residents and killing several dogs in the area, sparking a search that involved police armed with M-16 assault rifles, who found no trace of the alleged creature. That didn’t stop excited locals from claiming to have seen it, such as a Christine Samei, who told reporters that it was as big around as a 278-gallon water tank, and said, ”I heard the people talking about it and went there to see for myself. It's a very huge and ugly looking animal.”

Finally we have a recent report from 2010, from the north portion of West New Britain, at a place called Benaule Village. In November of that year, Pastor Ken-John was allegedly at an outhouse at the Tabernacle Of Worship church when he noticed something remarkably odd lurking just outside. He claims that he spied the silhouette of huge, quadrupedal creature with a long neck; a beast the locals know as the “Doren.” This beast is said to haunt the shoreline of the area, as well as the garden of the church, and is described as looking very much like a type of dinosaur known as a Herrerasaurus.

Papua New Guinea seems to be a breeding ground for reports such as we have seen here, and looking at the remote, unexplored rainforest terrain it is not really hard to see why. Here is a place where it seems that something like a living dinosaur could very easily evade discovery by human beings,. It is truly a place unto itself, lost to time and dwelling outside of civilization as we know it. There is no way to know if any of these reports are real or not, but if dinosaurs still prowl the earth, then this is one such place where they would do it. Perhaps they are out there now, going about their business as they have done for millions of years, mostly undetected and hidden from the world at large.