One report of a UFO sighting is interesting. A report of a UFO over a refinery is intriguing. Multiple reports of UFOs over the same refinery in a town known for UFO sightings demands attention … and possibly a government or military investigation. Welcome to Ciudad Madero, a Mexican coastal city in southeast Tamaulipas on the Gulf of Mexico where a UFO was seen and recorded by many people, reported by multiple media sites and raised questions about why UFOs seem to be attracted to refineries and mineral mines, especially in Mexico and Central and South America.

"Photographs of an alleged unidentified flying object (UFO) flying over the facilities of the “ Francisco I. Madero ” Refinery in Pemex , in Ciudad Madero , Tamaulipas , have begun to circulate through social networks.

These facts were reported by public transport operators, in addition to the same workers of the parastatal, who recognize that this type of sightings is not something new.”

El Heraldo de Mexico reports that the UFO sighting occurred on October 12 between 6:50 and 7:00 am and was witnessed by numerous workers. Along with photos of the ring of lights above the refinery (see them here), El Heraldo reminds readers of the “urban legend” of an extraterrestrial ship located just offshore of the city that many believe is there to protect it from hurricanes and tropical storms. The El Rrun Rrun blog shows more photos of the sightings and says that the state's Direccion de Proteccion Civil (Civil Defense) has received over 50 reports of UFOs in Tamaulipas since October 22, 2008.

“Since the terrible catastrophe caused by Hurricane Hilda in 1955, Tampico seems to be immune to natural disasters. A popular belief says that about 800 meters deep at Miramar Beach, located in Ciudad Madero, an extraterrestrial base was established that protects the coast. It is not uncommon to hear tampiqueños talk about strange lights coming out of the sea or flying saucers guarding the city. The belief in extraterrestrial beings has taken so much strength that on that coast the Martian Day is celebrated on the last Tuesday of each month. On one of these Tuesdays, the municipality of Ciudad Madero unveiled a monument to aliens which, unfortunately, was the victim of robbery within a few weeks.” 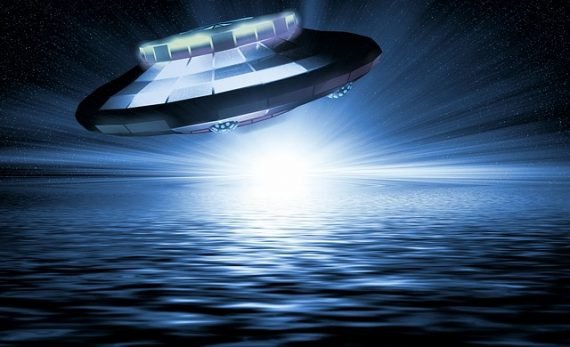 In 2015, Vice.com interviewed three of the many UFO witnesses in Ciudad Madero who believe the “urban legend” and the BBC talked to members of Tampico UFO Scientific Research Association, including Eduardo Anguiano Ortiz, author of "On UFOs, Ghosts and Other Extraordinary Events" who claimed to have talked to over 100 other UFO witnesses and concluded:

"To doubt the existence of UFOs is to have no intelligence."

Many people like Guillermo H. Sosa Tovar, who shared the images on Facebook, agree. So do local authorities according to the 2015 BBC article.

“The last time a hurricane that was heading towards the Tampico area was diverted was in 2013. That year, local authorities placed the bust of a Martian in Playa Miramar (which was stolen shortly afterwards) and declared that the Martian's Day would be celebrated on the last Tuesday of October.”

Ufologists have long speculated that sightings over refineries, mines and volcanoes – all common in Mexico – could be extraterrestrial ships refueling or getting parts. Skeptics point out that gasoline is a poor fuel for long-distance travel and believe Martian Day is just a way to attract tourists to this poor city. (Did they see how well this worked out on Storm Area 51 weekend?)

“I have many friends who have told me about ships leaving the sea. Even other fishermen have told me that when they go out at night or at dawn, they see very large, very powerful lights that follow them on their routes. Many serious people they told me about things that happened to them. I think it was a ship, they visit us."

A fisherman named Guadalupe told Vice.com why he believes. Did these same visitors hover their craft over the Pemex refinery in Ciudad Madero on October 12? There appears to have been no interviews with the workers and no official explanation given, leaving locals to draw their own conclusions.

"To doubt the existence of UFOs is to have no intelligence."

What do you think they believe?

People Who Vanished Into Thin Air at the Michigan Triangle