Not Quite Bigfoot: The Strange Tale of the Tuttle Bottoms Monster

By far the most famous and popular unexplained creature in the world of cryptozoology is Bigfoot, and the various permutations it takes across the world. Hairy, ape-like beasts have become a staple of unexplained mystery monster reports, and it has raised all manner of discussion and debate as to what it could all entail. On occasion, there will appear cases that seem to ostensibly fit into the mold of a Bigfoot-like creature, but which will harbor just enough bizarre differences to set it apart, and one of these is certainly that of an otherworldly creature that appeared in the U.S. state of Illinois, and which has remained unexplained and difficult to categorize to this day.

The legend in this case comes from the rough, mosquito infested swamplands north of Harrisburg, Illinois on the Saline River watershed, where for years there have been reports of something decidedly odd in the dim wilderness. For decades locals have sporadically sighted a massive, somewhat ape-like creature described as looming around 8 feet tall, covered in shaggy hair, and seeming to be something very much like a Bigfoot-type entity, but the size and hair are where the similarities apparently end. In this case the mysterious creature is said to alternatively travel about on two legs or four, and has the rather distinguishing feature of having a long, thin snout, most often compared to that of an anteater. It is also somewhat unique in its nonchalant attitude towards being spotted, often reportedly just casually going about its business without a care in the world rather than fleeing into the wilds. The creature has supposedly been seen dozens of times over the years, but perhaps the first reported run-in with what has come to be called the Tuttle Bottoms Monster was in a report in the Aug. 6, 1963 edition of The Harrisburg Daily Register, which read in part:

Saline County Sheriff James L. Thompson spent a busy night last night, starting about 11 p.m. and ending about 4:30 a.m. The Sheriff said he ran across a youth at Tuttle Bottoms about 11 p.m. The young man was armed with a rifle and told Thompson that there was a monster loose in the bottoms. He said it was eight feet long, four feet high and had a nose like an anteater. The young man put his rifle in his car and left, and later Thompson ran across about a dozen boys, armed with shotguns and other weapons and all looking for the “monster” in the bottoms. Their Sheriff soon dispersed the boys and sent them home. 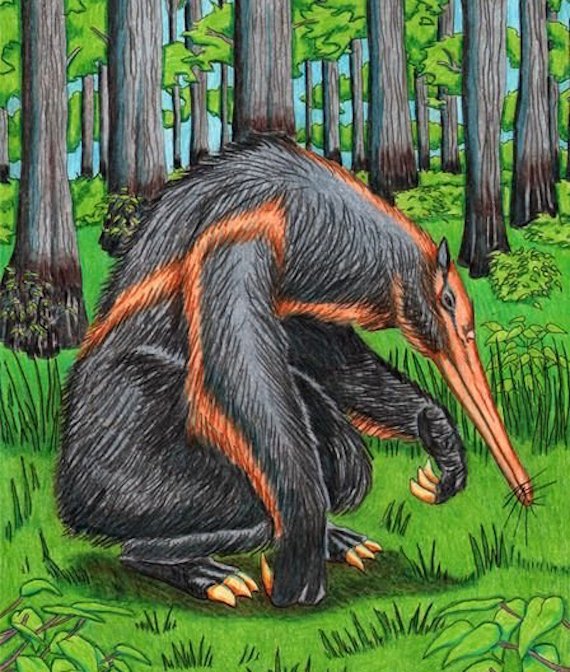 The creature would be seen far and wide in the region over the following decades, and it was said to especially have a knack for appearing at an area popular in the area as a sort of “lover’s lane,” where teens went to awkwardly make out in their cars. One police officer would claim that he had come across a group of youths in this vicinity who seemed to be very spooked about something they had seen emerge from the woods. The teenagers said it had been an 8-foot-tall monstrosity with a long snout “like an anteater,” which loitered around the area freaking everyone out before shuffling off back into the gloomy woods. In another report, a man driving in his car down a dark narrow road claimed that he had seen it loom across the road in front of him, staring at him with glowing or reflective eyes. Quite a few hunters reported encounters with the beast as well, always describing the exact same thing. There were plenty of theories as to what it could be, such as that it was an escaped ape or anteater, or that it was even some sort of surviving prehistoric beast, or a government experiment. Another report in the Daily Register from 2010 talks about the creature and some of these ideas, reading:

Former Harrisburg Police Chief Gary Crabtree said in 1999 prior to his retirement the department had received as many as 50 reports of some kind of beast lurking in the area northwest of Harrisburg in his 28 years at the department. Most reports regarded a hairy creature. Some had the creature on two legs and some on four. Most described it as having a long, almost anteater-like snout.

Virgil Smith, founder of the animal research organization Shadows of the Shawnee, has opened his own investigation into the monster and thinks he has a clue as to what it may be. Smith is hesitant to say much more without further evidence, but believes the creature was an actual animal released by the federal government and that another such creature was reported in Massac County. “It stood on two legs, was hairy, close to swampy river areas. A couple had the animal walk up to them,” Smith said. “It was more a description of a primate. The animal was not scared of humans.”

Smith said a former employee of the U.S. Department of Agriculture confided to him the department had launched an investigation into the Tuttle Bottoms Monster. The man also told him a story about the origin of the Massac County creature. Smith believes that origin could be the same as the fabled Tuttle Bottoms Monster and that it is a legitimate creature, not a monster out of myth. Smith believes the animals were released and have likely long-since died. Smith is hoping to receive information from anyone who has had an encounter with the monster. “What I’m looking for is older people, farmers, who either had a first-hand encounter or had first-hand reports. I’m not looking for headless horseman-type reports,” Smith said.

This report is curious, as Smith claims the creature was actually released by the federal government, which begs the question of why? Why would the government willingly release such a creature into this area? To what end? In the end we are left with a rather bizarre case within the annals of cryptozoology. What was this thing and did it ever really exist at all? It seems on the surface something very much like Bigfoot, yet with enough physical and behavioral differences to classify it as something else. Was this some sort of undiscovered species, an escaped exotic, a government experiment, or something else all together? It seems we may never know, and the case of the Tuttle Bottoms Monster remains a rather unique and obscure addition to the menagerie of weird creatures and monsters populating the field of cryptozoology.