Just last year, three videos were released which showed a 45-foot long tic-tac shaped object with incredible speed flying through the skies off the coast of California. The object revealed itself to Navy pilots off and on during a two-week period in November of 2004. The U.S.S. Nimitz aircraft carrier, as well as the support ships, such as the U.S.S. Princeton, all witnessed the bizarre and unexplained craft in the sky with it even being picked up on their sophisticated radar equipment.

Since that time, Cmdr. David Fravor has become a well-known name, as he was the Navy fighter pilot who engaged with the tic-tac shaped craft that was seen in the now famous UFO videos. Fravor has done several interviews since the videos were released, with one article quoting him saying, “I have never seen anything in my life that has the performance, the acceleration. Keep in mind this thing had no wings,” adding, “It’s moving around, left, right, forward, back. The radar starts being jammed. All of a sudden it takes off.”

Just days ago, Fravor did an interview with the Joe Rogan show where he went into new details and revelations about the 2004 UFO incident. He started off by mentioning that his F/A-18F Super Hornet was carrying dummy loads instead of live missiles because they were scheduled to participate in a training mission.

He then said that the pilots were unable to get a lock on the UFO with their radar because whoever (or whatever) was controlling the tic-tac shaped craft was blocking the radar systems. This is incredible, as the U.S. Navy has one of the newest, best, and most sophisticated radar systems in the world and for something to block their systems is absolutely fascinating.

Another very interesting fact that Fravor mentioned was that the investigations conducted by the military and the government are still ongoing as he has been to Washington several times already this year for confidential meetings with “high ranking government officials”.

Probably the most startling revelation was that another Navy pilot encountered an unexplained “kind of dark mass coming up from the depths” of the water in a 1990s encounter. He explained, “He’s out picking up a torpedo, they hook the diver up on the winch, and as they’re lowering him down, he sees this big mass. He goes, ‘it’s not a submarine.’” He went on to say, “...This big object, kind of circular, is coming up from the depths and he starts screaming through the intercom system to tell them to pull the diver up, and the diver’s only a few feet from the water.” At that point, “the torpedo got sucked down underwater, and the object just descended back down into the depths. They never recovered it.”

Another surprising revelation was that he admitted that he and some other pilots would sometimes play pranks on people camping out in the wilderness in southern California by pretending to be UFOs in the night sky.

He described their prank by explaining, “We used to fly night vision goggles in Hornets a lot. And with night vision goggles you can see a campfire from like fifty miles away. We used to do it, the good spots were down in like El Centro, California. There’s some bombing ranges and people go camping in the Superstition Mountains...” 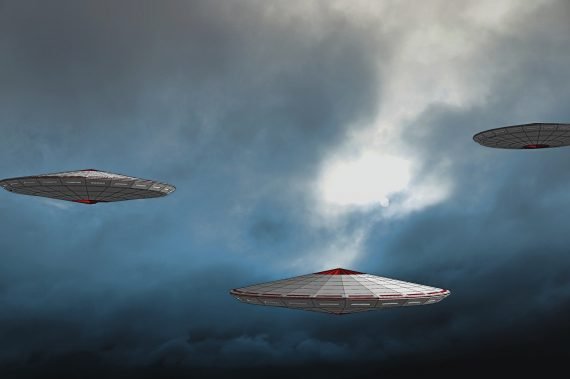 So they would fly around on goggles and sneak up on campsites, “And then you get the airplane going around 600 knots and then you pull the power back to idle so you can’t hear it,” he explained. He then added that when the planes would get close to the campsites, “...you pull the airplane into vertical and stroke the afterburners, let ‘em light off, you count to three and then you just go away. Instant UFO reporting.”

It’s good that these pilots have senses of humor, but I suppose it’s a little discouraging to those in southern California who have just finished reading this article and are now realizing that their “UFO encounter” might have just been Fravor and his colleagues playing pranks on unsuspecting campers. The nearly two-hour interview can be watched in full here.

From Skylab to Area 51: The CIA and a Secret Photograph