The Controversy-Filled Stones of Loch Ness

Today's article is focused on one of the most well-known places where monsters are said to lurk. I'm talking about no less than Loch Ness, Scotland. However, the article has absolutely nothing to do with unidentified animals of the long-necked variety. In fact, the subject is just about as far removed from monsters as you could possibly get. With that all said, read on. The summer of 1976 was noted for being one of the hottest on record in the U.K., something that anyone of a certain age, and who lived through it, can attest to. By June, the temperature was already up to the mid-80s Fahrenheit. On July 3, it peaked at a pulverizing 96.6 Fahrenheit. That scalding period was noted for something else too: an American named Marty Klein was at Loch Ness, as part of an expedition to find evidence of the existence of its famous creatures.

It was an ambitious quest organized and sponsored by the Boston, Massachusetts-based Academy of Applied Science and the New York Times, and headed by the late Nessie-seeker, Dr. Robert H. Rines. It was also a project that saw the AAS team capture some intriguing sonar imagery, including one – dubbed the “average plesiosaur” – that seemed to show nothing less than a long-necked carcass in deep waters off Fort Augustus, Loch Ness. But, there was something else that Klein and his comrades found – something that was as amazing as it was surely totally unanticipated.

While using side-scan sonar technology in the waters near the village of Lochend – which can be found on the northeastern end of the loch - the team stumbled on something hitherto unknown: two curious formations, one in water of a depth of barely thirty feet, and another at a depth of around seventy feet. They were described as “a mother lode of stone circles – big ones and little ones; single circles and circles intertwined with others; circles laid out in a straight line and circles in no particular order.” Given that Marty Klein was the key figure in the discovery of the stones, they became known – almost inevitably – as Kleinhenge I and Kleinhenge II. In terms of size, the circles ranged from fifteen to one hundred and fifty feet in diameter. And, to varying degrees, they overlapped. 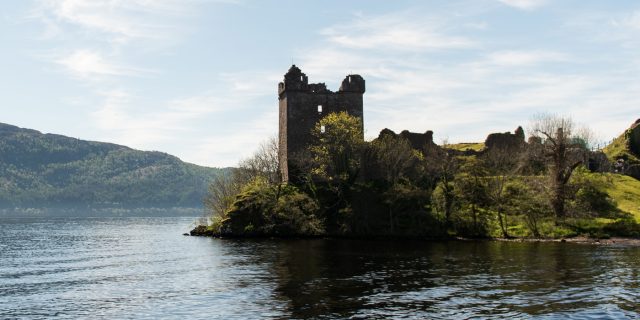 Not everyone was sure that the henges had Neolithic origins, which was something quickly suggested by the AAS when the formations were found. It was suggested that the stones were nothing stranger than material dredged from the nearby River Ness when the building of the Caledonian Canal was underway, early in the 19th century. A thought-provoking and plausible theory, to be sure. But, is this really all there was to the Kleinhenges? Others have suggested that such a down to earth explanation is very wide of the mark.

When the story of the stone circles of Loch Ness got out, Klein and a colleague, Charles Finkelstein, told the Chicago Tribune’s John Noble Wilford that while a great deal of further research was required, it was their initial conclusion that the formations were fashioned by human hand and that they quite possibly dated back thousands of years, and to a time when the waters of the loch were at much lower levels than today. Then, in 2005, Robert Rines commented on yet more curious formations of stones found in the deep waters of Loch Ness. Loch Ness Monster authority, Roland Watson, has mused on – but is admittedly not persuaded by - the idea that the sunken stones referenced by Rines in 2005 were a by-product of the completion of the Caledonian Canal in 1822, or of the widening of the A82 road back in the 1930s. The controversy continues.