The Ghost in Black and Other Spooks of the Blue Mountains

Located right on the west border of the Sydney metropolis area, of New South Wales, Australia, are the majestic Blue Mountains. Part of a larger expanse of rugged mountains of the Great Dividing Range, here there are wild peaks, cliffs, gorges and plateau escarpments that soar over the urban areas, forested gullies, and bushland below, and through this feral land of tangled brush and soaring mountains are several roads that meander through often perilous terrain. Yet for all of their scenic beauty, these mountains are infused with sinister lore and tales of the paranormal.

One of these revolves around the Victoria Pass, part of the Great Western Highway, which winds down from Mt. Victoria to Little Hartley and takes a harrowing route over dangerous terrain, dizzying sheer cliffs, and over precarious bridges built by convicts, but in addition to its physical dangers this is also a stretch of road that is home to a good amount of dark history and paranormal phenomena. The main ghostly attraction here is an apparition that purportedly prowls the road, appearing as a woman dressed in all black clothes and called “The Ghost in Black.” According to the Blue Mountains Library Local Studies she is often described:

Some reported that her long, dark hair streamed out in the wind and that her arms were raised in a suppliant gesture. Some said that her eyes shone in the dark like a tiger’s and a few said that she was headless. As suddenly as she appeared the spectre would disappear.

This apparition supposedly has the unsettling habit of appearing in the middle of the road to startle drivers snaking their way along the route, often causing them to swerve, or according to some tales even go careening off the side to their deaths, and the Ghost in Black is blamed for more than a few accidents here along this lonely stretch. It is thought that the ghost is that of a young woman named Caroline, of the town of Little Hartley, who had a life intertwined with tragedy and murder. The daughter of liquor bootleggers Mary Hopkins and William James, she shared a hovel with 5 brothers and sisters. At the age of 8 her mother committed suicide, although it was suspected the drunk wife beater William might have had something to do with it, and he was eventually arrested on suspicion of murder and sentenced to death, only to be set free again when the conviction was overturned.

In the meantime, Caroline and her siblings had been left alone out in this wild, untamed land, and they lost their baby brother in the process of trying to survive without their parents. Caroline and her sister Mary would then go to work as servants at the Hartley Inn, owned by a wealthy local family by the name of Collits, where they met ex-convict John Walsh. At the age of 12, which was the age of consent at the time, Mary married Walsh and Caroline married a man named William, the son of the Collits’, a marriage which was soon to disintegrate as he was a violent drunk. Caroline moved in with Mary and Walsh, where she would begin a bizarre ménage-a-trois relationship with them, but she would later try to reconcile with her husband. The story goes that Caroline, Mary, and Walsh met William, but that the two men got into a drunken brawl, possibly out of jelousy, with Caroline breaking it up and telling William to flee. The next day her naked, battered, bloody body would be found at the second bridge of Victoria Pass, having been raped and her head bashed in with a rock. No one is quite sure what happened, but John Walsh would be arrested and sentenced to death for the crime in 1842, and ever since then Caroline’s vengeful ghost is said to lurk at the pass. 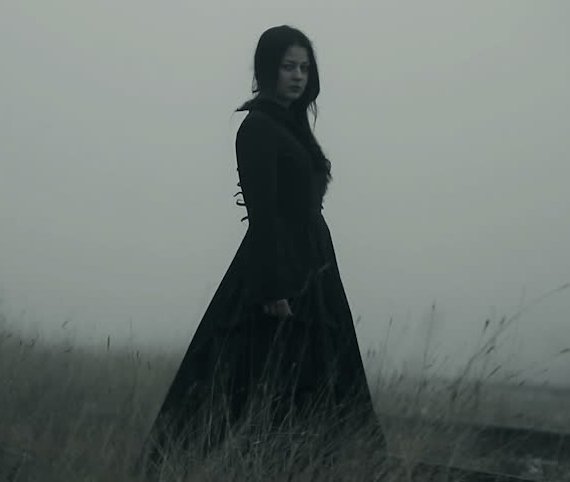 The Ghost in Black is certainly not alone in the Blue Mountains, and indeed the area of Victoria Pass has others as well. Here there is an old convict stockade between Mt. Victoria and Mt. York, where many convicts died under the harsh conditions and ruthless mistreatment laid down upon them. Indeed the conditions were so bad that there is a flat area of rock by a sheer cliff where many of them are said to have leapt off into the abyss rather than face another minute of their torturous manual labor. This rock slab is said to be haunted by the apparitions of ghosts in old fashioned convict clothing, which will supposedly even try to push people who get to close off the edge of the cliff. Another haunted area of the stockade is a makeshift grave site for convicts who dropped dead on the job, and which is prowled by their ghosts and mystery lights, as well as what are called “the convict wells,” deep holes in the ground where they were stuffed for the night to keep them from escaping and whose dark confines were the last thing many of them ever saw. Of course they are haunted.

There are some other intensely haunted places here as well, notably at the historic town of Hartley, now abandoned and preserved as a historical treasure. One of these is the Victoria and Albert Guesthouse. Originally built in 1914, the building is surrounded with a bit of a notorious history, having at various points been a haunt for convicts, as well as serving as a convalescent home to soldiers during World War II, a psychiatric nursing home, and a boy’s boarding school, burning to the ground and being rebuilt twice to boot. It is said that during its boarding school days there was a mad doctor here who would carry out illicit experiments on the boys, who he used as unwilling guinea pigs for his demented projects. It is said that the ghost of this doctor still roams the halls and rooms here, as well as those of the innocent boys he tortured here. Rooms 7 and 9 are supposedly the most haunted, with 7 being the haunt of two boys named Pete and Albert, and Room 9 in particular harboring an apparently malevolent presence which instills so much discomfort and sheer dread that some people refuse to step foot here. There are also the ghosts of convicts who were kept here locked away to rot in solitary confinement in what is now the laundry room, and other, less identifiable entities roaming about, and one local paranormal investigator called “Paranormal Pete” says that the Victoria and Albert Guesthouse is “absolutely chockers with ghosts.”

Also in Hartley are the courthouse and former jail, which are both haunted. The courthouse was originally built in 1837, and was the origin of many a harsh punishment and execution, and it is here where the former magistrate Thomas Brown still supposedly wanders about, most often appearing in darkened windows to peer out at startled visitors. The historic jail cell, which once crammed in up to 30 convicts at a time to wallow about in dank squalor, is also imbued with a dark and malicious energy, and there is apparently a very aggressive ghost here that will physically tap, push, and hit people over the head. Whatever is in there supposedly does not want anyone there, and EVP (Electronic Voice Phenomena) readings taken here often feature a gruff voice spewing profanities.

Right nearby is the Hartley Vale Cemetery, which also has its own violent ghost called Mick the Miner, who is known to hit visitors and try to strangle people, as well as a headless horseman who will ride through. Adding to the ghosts here are those of six children who died of scarlet fever in the 1800s and supposedly were buried in a mass grave that is often orbited by mystery lights and orbs, as well as that of a reverend who once drowned here in a flash flood. Another haunted graveyard is called the Blackheath convict graves, where the bodies of convict laborers, who built most of the roads and bridges throughout the Blue Mountains, were buried separately from the other citizens. The graves of the convicts were usually shallow ones, just holes out in the brush where their bodies were unceremoniously dumped without any proper funeral rites or headstones. The ghosts here are said to be very sinister and grumpy, often shouting at people to get out or physically attacking visitors.

As well as being a popular location for its scenic views and wilderness right up next to a metropolitan area, it seems the Blue Mountains have more than their fair share of mysteries. Here one can find all manner of ghosts and apparitions tied to the area's dark past, and which remain tethered to this wild place. There are many ghost tours operating through the region, so if you are ever in the area check it out. You never know what you might find, or what might find you.