I have received in the mail a book that I think most people with an interest in Cryptozoology in general, and the Bigfoot controversy in particular, will sit up and take notice of. Its title is The Historical Bigfoot and it's put together by Chad Arment. As for the subtitle, it's Early Reports of Wild Men, Hairy Giants, and Wandering Gorillas in North America.  This book is almost unique in terms of Bigfoot publications, because it runs to in excess of 1,000 pages. Yes, you did read that right: one thousand. I say "almost unique" because, amazingly, there is one book that even exceeds the page-count of this book. Its title is Far Out, Shaggy, Funky Monsters, which is 1,181 pages in length. It's written by Daniel S. Green, focuses on Bigfoot in the 1970s, and is enormous. I'm actually still reading that one, and I'll give it a review when I have finally finished it. Both books are published by Coachwip Publications of Greenville, Ohio. As for The Historical Bigfoot, the copy that I have is the newly-published second edition; the first edition came out in 2006. Both books sit well next to each other.

As you might have already guessed, the book is a collection of just about all the cases of huge, hulking, hairy ape-type animals seen in the United States, but which predate the 1950s, which was when the term "Bigfoot" was famously created. As much as I like reading books, tackling one this size is a bit of a challenge. When I picked the book up I thought to myself: how on Earth could the author write a book on pre-1950s Bigfoot encounters and make it such a gigantic piece of work? Well, I quickly found out. For the most part the book does not amount to the author's work. I'll explain what I mean by that. The book is actually an immense collection of old newspaper articles, all reproduced complete with content, headline-titles, dates, locations and more. In that sense, the book is the perfect, ultimate resource guide for just about every bit of media-based data on Bigfoot in the 19th century and thru the mid-20th century. 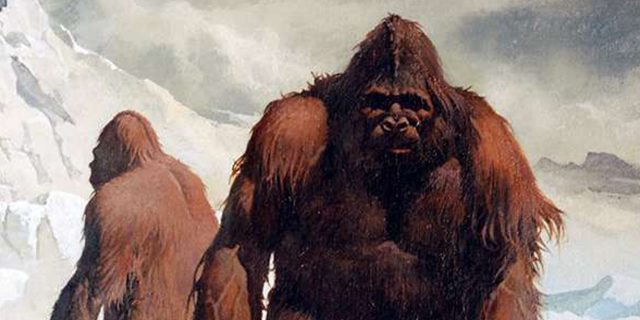 It's a valuable book, as it is unlikely you'll ever find anything else like it. To give you an idea of the content, here are two examples from its many pages. We'll begin with an extract from the October 12, 1935 edition of the Wisconsin-based Leader. The headline is "Reports tell of Canadian Monster Men." In part, it states: "Sasquatch men, remnants of a lost race of 'wild men' who inhabited the rocky regions of British Columbia centuries ago, are reported roaming the province again."

Then, we have a story titled "Wild Man Seen Again." It appeared in the Daily Iowa Capital on September 28, 1899. The opening words to the article go as follows: "The wild man is in this vicinity, or at least was at an early hour Wednesday morning. He was seen by a hired man employed by Capt. Garker while he was in the Grand river timber looking for some stray stock." Of the wild man, we're told that he was "like a gorilla or large ape" and was "of gigantic stature." And the collection of news stories go on and on.

Although I mentioned that the book is the perfect resource item for early sightings of Bigfoot (it places everything in a handy state-by-state fashion) , I would prefer something somewhat different in style. Namely, to see the author rewrite the articles in his very own words. Chad is a good writer and - in light of that - I think something that told the story of each and every case, with all the data included, but with Chad at the helm, would be a far better approach than just sharing hundreds and hundreds of media-based stories in verbatim style.