The Mysteries of the Legendary Well of Souls

Located on the Temple Mount in the Old City of Jerusalem, in Israel, lies one of the oldest pieces of known Islamic architecture, a shrine known commonly as “The Dome of the Rock.” Completed in 691–92 AD, it has had a long history, and although it has been destroyed and rebuilt several times over the centuries it remains an important and unique piece of architecture. With its octagonal layout, piers, grand columns, and walls covered with marble, mosaics and inscriptions, it is an immediately recognizable landmark, one of the most famous in Jerusalem, but as interesting as The Dome of the Rock is, even more interesting and steeped in mystery is what it is built upon. Here is a place worshipped for centuries, and home of deep mysteries that will will perhaps never, or should not ever understand.

In the center of the Dome is a large rock called The Foundation Stone, which has incredible importance in the Abrahamic religions. It is said that God created the world and Adam, the first human being, from here, and that it serves as a spiritual junction or portal between Heaven and Earth, called the axis mundi and also the “Holy of Holies.” Because of this, in Judaism it is believed that the power of God on Earth is strongest at this point, where He manifests the most, and it is for this reason that the Jewish face this direction when praying the Amidah, which is the central prayer of the Jewish liturgy. The Foundation Stone is also an important location for Muslims, as it is believed that it is from here that the Prophet Muhammad began his fabled Night Journey aboard a winged mule-like white beast, called Buraq, to ascend to Heaven to what is called "the farthest mosque." The 11th-century Persian writer and traveler Nasir-i Khusraw would write of this:

They say that on the night of his Ascension into heaven, the Prophet, peace and blessing be upon him, prayed first at the Dome of the Rock, laying his hand upon the Rock. As he went out, the Rock, to do him honor, rose up, but he laid his hand on it to keep it in its place and firmly fixed it there. But by reason of this rising up, it is even to this present day partly detached from the ground beneath.

The Foundation Stone was also important for the Knights Templar, who had their headquarters there for much of the 12th century and identified the Dome of the Rock as the site of the Temple of Solomon. The Foundation Rock is considered to be among the most important and revered religious spots in both Judaism and Islam, but while the rock and temple themselves are still embroiled in mysteries and differences of opinion as to their true significance and histories, even more enigmatic still is what lies below the site. Down in the earth beneath the Foundation Stone, past a hole in the upper portion, is a subterranean cave known as The Well of Souls, also sometimes variously called the Pit of Souls, Cave of Spirits, or Well of Spirits. The cave is accessed by 15 steps that descend into the gloom to a passageway adorned with prayer niches devoted to the biblical figures David and Solomon, which leads to the main chamber. This chamber has two shrines on either end for the biblical figures Abraham and Elijah, and there is a shaft that leads up to the hole of the Foundation Stone above, its purpose shrouded in mystery.

The stairs and passageway to the Well of Souls are believed to have been created by the Crusaders who recaptured Jerusalem in 1099 and turned the Dome of the Rock into a church, and the cave itself may seem interesting but ultimately nondescript, yet it is absolutely pervaded with myths, legends, and mysteries. This mostly lies not with the cave itself, but what supposedly lies under it in another cave system below, which is said to be the true Well of Souls. The legend from which it gets its name comes from the medieval Islamic legend that it was here where the souls of the dead would come to languish as they awaited their fate during Judgment Day, and it was long said that sometimes the screaming and wailing of these souls could be heard emanating from it. Muslim traditions also claim that this cave is the literal center of the universe, and that under it is a bottomless pit through which flows the river of Paradise. 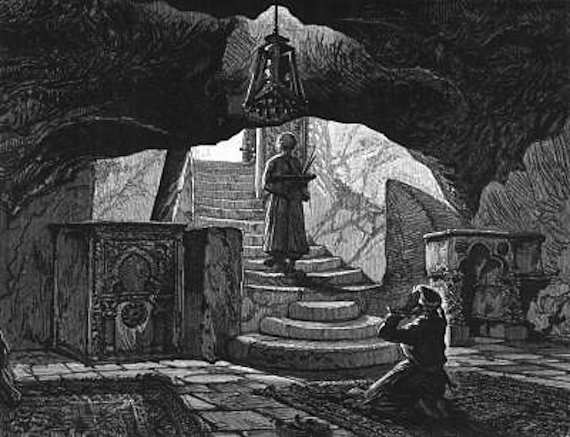 In Jewish traditions the Talmud states that below the cave is a great abyss that still roils with the waters of the biblical flood, and indeed it is said that Noah landed here when the Great Flood subsided. In later centuries the cave would gain prominence within Christianity as well, with the coming of the Crusaders, who were responsible for creating the entrance and passageway through the rock and who called it the Templum Domini, or "Temple of the Lord." To them this cave was also a holy place, and the site of the announcement of John the Baptist's birth.

In addition to these myriad myths and traditions, one of the main mysteries of this significant cave is that there is indeed evidence of a larger chamber lying beneath the cave, although there is no known entrance to it and it is a mystery what lies down there as no excavation has ever been attempted for fear of damaging this very holy site. Theories on what could be in this hidden chamber include that it holds a literal bottomless abyss, that it is really where the souls go to await judgement, that it is the chamber where Abraham prepared his son Isaac as a sacrifice to God, and even that it is the final resting place of the Lost Ark of the Covenant, the sacred vessel that supposedly contains the original Ten Commandments that God gave to Moses upon Mount Sinai. Some say that a great treasure lies down there, a lost city, or some fantastic Biblical artifact, but it is unknown.

No one really knows what is down there, and there is also the theory that there is nothing there at all. We will probably never know, as considering the cave’s religious importance and the diplomatic and theological sensitive issue of exploring it there is very little chance that anyone would dare go in and tear up the floor. The Well of Souls could hold wondrous and fantastical historical artifacts and marvels, the Power of God, or nothing at all, and the question of what it contains is a question we will likely never get an answer to, its mysteries buried in the gloom as they always have, and perhaps always will.