One of the biggest and indeed most mysterious islands in the world, New Guinea sprawls out over 340,000 square miles, much of it little explored mountainous terrain and rough wilderness. It is a vast, uncharted domain of rain forests populated by unknown species, more of which are being discovered practically every day, and it seems very much a lost world largely untouched in these modern times when there are few corners of our planet that haven’t been tamed or conquered in our never ending drive of exploration. It is here where there is said to lurk a very odd cryptid, talked about by locals, whispered about by explorers, yet remaining outside of our grasp.

The story of what would gain the perhaps unflattering nickname of “The Papuan Devil-Pig” began in the late 1800s, when in 1875, the English scientific journal Nature carried a report of an expedition led by Lieutenant Sidney Smith and Captain Moresby from H.M.S. Basilisk, who found an unusual pile of dung out in the wilds of Papua New Guinea’s north coast. The men said it looked just like a dung pile of a rhinoceros, which would have been odd since no such large animal was known to exist there, and certainly no rhinos. In that very same year, German zoologist Dr Adolf Meyer also concurred with the reports of something strange in the region, saying that the Natives were well aware of a very large, pig-like quadruped with a long snout that they occasionally spotted in the wilderness, and he would write of this creature:

I agree with you that the presence of rhinoceros in New Guinea must be seriously questioned, but I would like to mention a description of [a] very large quadruped in New Guinea. While I was hunting wild pigs with the Papuans, they told me, before I asked, a very large pig, as they called it, fixing its height on a tree trunk over six feet. I could not obtain other information from them, except that the beast was very rare, but they were very accurate in their assertion. I promised lots of beads and knives to the man who would bring me something [of] this big animal, but none did.

The odd beast would become more well-known in 1906, when the British explorer Captain Charles A.W. Monckton was in the west portion of what was then British New Guinea and began uncovering some unusual finds out there in those dim wilds. In 1870, Monckton found several signs of an unknown beast here, including bizarre giant cloven footprints upon a high altitude grassy plain upon Mount Albert Edward, as well as numerous Native stories of a massive creature they claimed was as big as a rhino and had “a nose like a tapir’s and a face like the devil." Another member of the team, a man called Ogi, would actually see one of the creatures when he went off on his own to investigate some of the tracks along with a guide named Oina. He would claim to have been separated from his guide, and to then have seen two large pig-like animals with dark patterns on their bodies, long snouts almost like a proboscis, and horse-like bushy tails. The animals apparently terrified Ogi, leaving him in a state of shock and he even claimed that he had fired at what he called the “Devil Pigs.” Monckton would write of this encounter:

After he [Ogi] had parted with Oina, the carrier with him had pointed out two enormous pigs feeding on a grass patch. He had gone within thirty yards and fired at one, but said that his hand was shaking so much with cold that he could not hold his rifle straight. At the report of the rifle, the smaller of the two animals moved off; the larger raised its head, and turned round and looked at Ogi, who perceived that there was something unusual about it. At the same time the carrier called out "Those are devils, not pigs!" While Ogi, partly paralysed with cold and fright, was fumbling with a second cartridge, the animal that had at first moved off called to its mate, which at once trotted away. 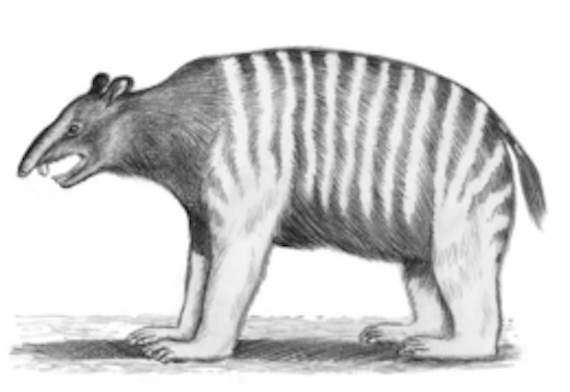 At the time, Monckton merely made mention of the finds in his journal, but when word got out it was heavily covered in the media, which called the unknown creature “Monckton’s Gazeka” and wove a tale of the expedition encountering the beast attacking a village and firing upon it. One such spectacular news report of the time would describe the incident thusly:

The huge Gazeka at once turned upon him. As it reared upon its hind legs and pawed the air, it looked to the hunter as big as a house, standing fully 25 feet high. Two of Monckton’s bullets seemed to take effect, as a stream of blood flowed freely from the animal’s shoulder, but before Monckton was able to reload, the animal turned and fled. By that time, it was too dark to follow him, and Monckton never had another opportunity to renew his pursuit.

It is uncertain how much any of this report is true, but it certainly did plant the creature squarely in the public consciousness, and more reports would follow. Later in that very same year, a crew member aboard a steamer was exploring along the Baxter River when he found huge cloven footprints like nothing from any known wildlife of the region. In the 1880s there was also a report from a Sir William MacGregor of a long-snouted, bulky creature in the vicinity of Mount Scratchely. There would be more sightings with a 1909-1911 expedition led by explorer and naturalist Walter Goodfellow, which had ostensibly been sent there by the British Ornithologists Union to study native birds along the Mimika River. The team would gather many accounts of the “Devil Pig” from natives and some team members would claim to have seen it themselves. In 1910, there would be a report in the Steven’s Point Wisconsin Gazette, which claimed that Goodfellow’s team had managed to discover a “prehistoric monster, larger than an elephant,” as well as “marvelous race of pygmies seen for the first time by modern science.” There would be another expedition to New Guinea in 1911 led by a Dr. Hendrik Lorentz to try and find the mysterious animal, but it was met with tragedy when three porters died and Lorentz himself broke a rib after falling off a cliff. 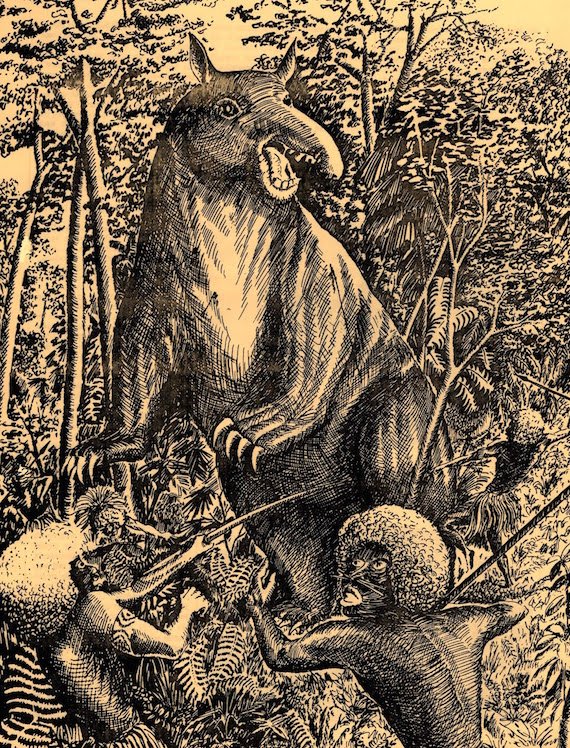 In 1920, Monckton would claim to have actually come into the possession of a tusk from one of the creatures, which he received from the natives of Goodenough Island, in Papua New Guinea's Milne Bay. The tusk would sort of disappear after it was passed on to a Richard Burton, and it is unclear if this could have been genuine physical evidence. In more recent years, in 1952 there was a sighting of large creatures in New Guinea by some pilots flying over the island, who described them as looking like “red elephants,” and which could have also been the elusive creatures. After this, reports of such beasts from New Guinea have dropped off and we are left to wonder what kind of creature we could be dealing with in these accounts.

What is important to remember is that there are no known species of pig, rhinoceros, elephant, or indeed any really large placental animal at all in these areas. With regards to terrestrial mammals, Papua New Guinea is only inhabited by monotremes and marsupials, none of which even come close to the descriptions given of the “Gazeka.” There have been some ideas put forward that it may have represented a relic population of a thought to be extinct large marsupial from the Late Pleistocene known as the Diprotodon, which grew up to 10 feet from nose to tail and was sort of like a giant wombat, but these do not really match the descriptions given, nor are they thought to have ever inhabited New Guinea. It could also be that these could have been wayward out-of-place babirusa, wild feral pigs, Malayan tapirs, or even Javan rhinoceroses, somehow managing to have swum across to the island. It has also been speculated that this was merely a sort of hoax fueled by the sensationalist news reports of the day, or that these explorers were just making it all up. Who knows? Seeing as there have been no modern accounts, it is easy to imagine that whatever it was has gone extinct or moved deep inland, and there is the distinct possibility that we will never know the answers we seek.

The Real Excalibur? Medieval Sword Pulled From Rock At Bottom Of Lake