The Real Excalibur? Medieval Sword Pulled From Rock At Bottom Of Lake

Archaeologists have pulled a 14th century sword out of a rock that was found at the bottom of the Vrbas River in Bosnia and Herzegovina. The discovery has been compared to the legend of King Arthur’s magical sword because of the way it was found.

The 700-year-old sword was discovered embedded in solid rock approximately 36 feet below the river’s surface. Archaeologists made the discovery while they were excavating close to the ruins of a medieval castle located in Zvecaj. Before the castle had been destroyed in the year 1777, it was probably occupied by a medieval nobility who ruled the village.

It’s definitely a rare find, as it is the first ever sword that has been recovered close to the medieval city of Zveča. In fact, only one other sword of its kind has been found in the Balkans during the last 90 years. Now experts need to figure out why the ancient sword was embedded into the rock in the first place. Pictures of the sword as well as a video of it embedded in the rock underwater can be seen here.

Oddly enough, there are quite a few similarities between this new discovery of the sword at the bottom of the Vrbas River and the legend of King Arthur. We’ve all heard about the story of Arthur, the magical sword, and the wizard Merlin. There have been movies and television series made about the king and his life, as well as books, poems, and other writings.

Of the many accounts over the centuries describing the various legends of King Arthur and his magical sword, one in particular has been widely discussed and that’s Robert de Boron’s French poem called Merlin which he wrote in the late 12th century. Another famous piece is called Le Morte D’Arthur which was written by Sir Thomas Malory and published in 1485. 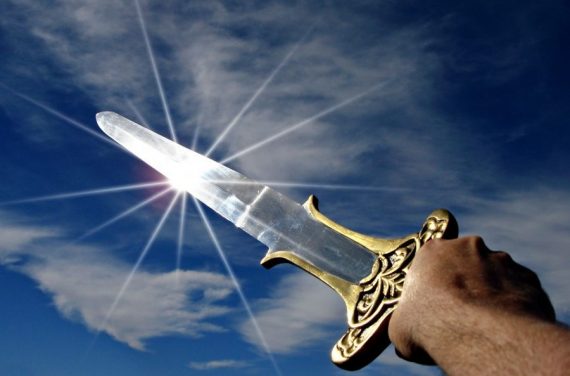 While there have been a few versions of the legend, the most popular story describes how the wizard Merlin placed the sword into a large stone and announced that only the true heir of the British throne would be able to remove it. While several men attempted to remove the sword from the stone, it was only the young Arthur who was able to successfully pull it out. His reign as the British king lasted from the late 5th century into the early 6th century. Whether King Arthur was a fictional character or a real person is strongly debated even to this very day.