The great inventor and businessman Thomas Edison perhaps needs no introduction. Responsible for groundbreaking discoveries in the fields of cameras, electric power generation, mass communication, sound recording, and of course the practical electric light bulb, with thousands of patents to his name, he is widely considered to be one of the most famous and most prolific and influential inventors in the world. Yet for all of his practical inventions, he did come up with some things that were decidedly more fringe, and certainly one of these would be the phone he envisioned could talk to the dead.

For such a man of science, it turns out Edison was very interested in the afterlife, entranced with it in fact, and had big theories as to what it all entailed. In his eyes, life after death was not the way perhaps many may envision it. His theory was that there was basically a set amount of life in the universe, and that it could not be created or destroyed, much like the conservation of energy or mass laws in thermodynamics. This life, he surmised, came in the form of myriads of infinitesimal entities, each a separate consciousness, which acted much like atoms do with matter, forming the smallest building blocks of life as we know it. According to him, the individual consciousnesses in each person were made up of unique patterns of these tiny entities, which grouped together in swarms within the Broca area of the brain to form our “soul,” so to speak. He believed that death came when these tiny entities disagreed, and that they could go onto exist beyond the physical body, saying of his thoughts on the matter:

I believe that life, like matter, is indestructible.There has always been a certain amount of life in this world, and there will always be the same amount. You cannot create life; you cannot destroy life; you cannot multiply life. I believe our bodies are composed of myriads and myriads of infinitesimal entities, each in itself a unit of life, which band together to build a man.

In our bodies these entities constantly rebuild our tissues to replace those which are constantly wearing out. They watch after functions of the various organs, just as the engineers in a power house see that the machinery is kept in perfect order. Once conditions in the body become unsatisfactory in the body, either through a fatal sickness, fatal accident or old age, the entities simply depart from the body and leave little more than an empty structure behind. Being indefatigable workers, they naturally seek something else to do. They either enter into the body of another man or even start work on some other form of life. At any rate, there is a fixed number of these, and it is the same entities that have served over and over again.

They fight out their differences, and then the stronger group takes charge. If the minority is willing to be disciplined and to conform, there is harmony. But minorities sometimes say: ‘to hell with this place; let’s get out of it.’ They refuse to do their appointed work in the man’s body, he sickens and dies … and they are all free to seek new experience somewhere else. When we ‘die’, these swarms of units, like a swarm of bees, so to speak, betake themselves elsewhere, and go on functioning in some other form or environment. There are many indications that we human beings act as a community or ensemble rather than as units. That is why I believe that each of us comprises millions upon millions of entities, and that our body and our mind represent the vote or voice, whichever you wish to call it, of our entities. The entities live forever. Death is simply the departure of the entities from our body.

Edison believed that these particles came from outer space, and surmised that if they could be arranged back into their prior harmony, then that dead person’s consciousness would be essentially resurrected. It was his guess that some sort of photographic plate could be used to record the precise layout of these entities, and serve as a sort of snapshot to the personality that had passed on, allowing them to be put back together again. He would muse:

If the units of life which compose an individual’s memory hold together after ‘death,’ is it not within range of possibility, to say the least, that these memory swarms could retain the powers they formerly possessed, and thus retain what we call the individual’s personality after ‘dissolution’ of the body? I am hopeful, that by providing the right kind of instrument, to be operated by this personality, we can receive intelligent messages from it in its changed habitation, or environment.

Edison apparently spent quite a lot of effort trying to prove that these theoretical particles existed, gathering a team of scientists to test out a machine that could detect them, to not very much success. Nevertheless, he went about trying to craft a device that could be used to communicate with personalities that had passed from the world of the living. He would in October of 1920 give a rather spectacular announcement to this effect to the media, saying that he had been working on an apparatus that would be able to contact the dead, which would go on to be called the “Spirit Phone,” and of which Edison would say:

I have been at work for some time, building an apparatus to see if it is possible for personalities which have left this earth to communicate with us. I am proceeding on the theory that, in the very nature of things, the degrees of material or physical power possessed by those in the next life must be extremely slight; and that, therefore, any instrument designed to communicate with us must be super-delicate—as finely responsive as human ingenuity can make it. For my part, I am inclined to believe that our personality hereafter will be able to affect matter. If this reasoning be correct, then if we can evolve an instrument so delicate as to be affected, or moved or manipulated,—whichever term you want to use—by our personality, as it survives in the next life, such an instrument, when made available, ought to record something.

I don't claim that our personalities pass on to another existence or sphere. I don't claim anything because I don't know anything about the subject. For that matter, no human being knows. But I do claim that it is possible to construct an apparatus which will be so delicate that if there are personalities in another existence or sphere who wish to get in touch with us in this existence or sphere, the apparatus will at least give them a better opportunity to express themselves than the tilting tables and raps and ouija boards and mediums and the other crude methods now purported to be the only means of communication. I do hope that our personality survives. If it does, then my apparatus ought to be of some use. That is why I am now at work on the most sensitive apparatus I have ever undertaken to build, and I await the results with the keenest interest. 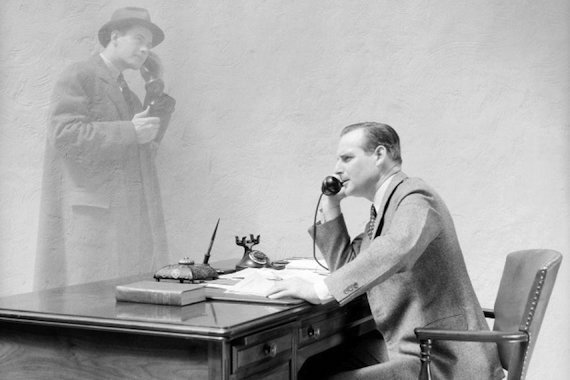 In Edison’s view this could all be done through strict science, and he indeed was skeptical of spiritualist methods and loathe to rely on any “occult, mystifying, mysterious, or weird means employed by so-called "spirit mediums.” Indeed, he was unable to accept more paranormal ways to contact the dead, admonishing spirit mediums and other such beliefs. He sought to distance himself from Spiritualism, which was very popular at the time, and pursue a scientific approach, and he would say:

In truth, it is the crudeness of the present methods that makes me doubt the authenticity of purported communications with deceased persons. Why should personalities in another existence or sphere waste their time working a little triangular piece of wood over a board with certain lettering on it? Why should such personalities play pranks with a table?

For their part the media ate this stuff up. After all, this was an era in which Spiritualism was all the rage, when mediums, Ouija boards, and séance tables were in full swing. At the time speaking with the dead was cool, man, and despite his adherence to science, Edison’s announcement couldn’t have come at a better time to get maximum coverage. Indeed, there are plenty of people who think that Edison was merely riding the wave of this popularity at the time, and that has propelled the idea that this could have all been a hoax or even a practical joke on Edison’s part. After all, he never did produce any blueprints outlining the device nor any prototype, and by all accounts never actually produced it in any capacity at all. He was also extremely vague on any details pertaining to how it would actually work, so it is unclear how seriously the inventor and respected scientist took any of it. Sadly, Thomas Edison would die in 1931 without ever creating this theoretical spirit phone, at least not that we know of.

Nevertheless, it is believed by some that these blueprints do indeed exist somewhere, maybe even a prototype itself, and that Edison was perfectly serious about it all. in the end it all remains a mystery, and it is unknown just how far along Edison was on an actual device to talk to spirits. In later years we have similar devices used for EVP (Electronic Voice Phenomena) and other paraphernalia for talking to spirits, such as spirit boxes, but one wonders just what this great inventor had up his sleeve or if he was really onto something or not. It is currently impossible to know, and Thomas Edison's spirit phone remains a strange little historical oddity.