Tiny Cursed Primate Has Two Thumbs on Each Hand

What’s worse that a hand with one thumb and four fingers? If a tiny primate called the aye-aye could talk, it might say a hand with TWO thumbs and four fingers. What’s worse than having an aye-aye show you its extra thumb? Having one point a finger at you – these strange Madagascar lemurs also have an unusually-long ring finger that locals believe will curse you to death if you’re on the receiving end of it. What’s worse than getting cursed by an aye-aye? That smug four-thumbs-up sign they give after dooming you to death.

“The aye-aye has the craziest hand of any primate. Their fingers have evolved to be extremely specialized - so specialized, in fact, that they aren't much help when it comes to moving through trees. When you watch them move, it looks like a strange lemur walking on spiders."

Adam Hartstone-Rose, associate professor of biological sciences at North Carolina State University, is a big expert in little primates. For proof, you need look no further than the fact that he discovered something over 100 years of primatological study of aye-aye bones and X-rays didn’t – the Daubentonia madagascariensis is the only primate with a second pseudothumb on each hand. In his paper published this week in The American Journal of Pysical Anthropology and in a press release, Hartstone-Rose explains his theory as to why only the aye-aye (of primates – the giant panda is one of a few other non-primates with them) may have evolved this strange extra digit.

“Pseudothumbs have been suggested to improve palmar dexterity in taxa with overly ‐generalized first digits (e.g., pandas) and to widen the hand for digging (e.g., some fossorial moles), but the aye‐aye's pseudothumb represents what we believe is a heretofore unrecognized third functional role: its accessory digit compensates for overspecialization of its fingers for non‐gripping functions (in this case, the aye‐aye's unique “tap foraging” practices).”

It's the curse of the curse-giver. Researchers believe the aye-aye developed its extremely long, skinny and scary-to-natives fingers for the two-fold purpose of tapping on trees to listen for hollow sounds (echolocation) and then inserting the same fingers into narrow openings to bring out the bugs. As one might imagine, these excellent long eating utensils make very poor gripping tools for swinging in trees to escape terrified humans. Hartstone-Rose found tiny muscles in the pseudothumbs which prove these digits evolved as extra swinging aids. And yes, the tiny aye-ayes really do need to swing from terrified humans. 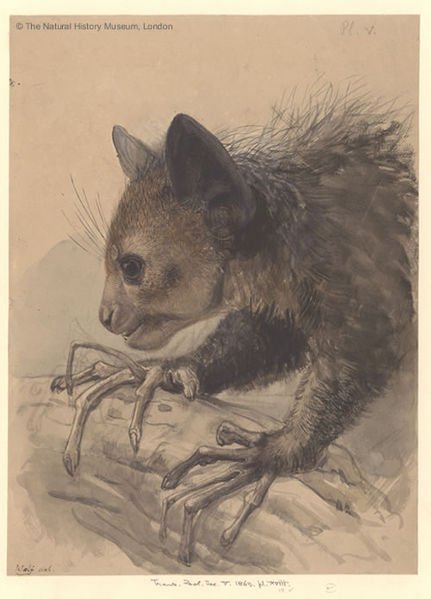 “One myth claims that if an aye aye points its long, skeletal middle finger at you, you are cursed to death. Another describes how they sneak into villages at night and use their digit to stab sleeping locals in the aorta, and according to yet another, the sighting of an aye aye predicts the death of you or someone in your community.”

The Aye-Ayes Project points out that the aye-aye is protected by the Madagascar government but old customs die hard … and so do the little lemurs. Natives believe aye-ayes must be killed on sight and hung up until their ‘evil’ spirits leave the body. The name aye-aye is thought to mean “I don’t know” – a response natives may have given to curious Europeans in order to avoid saying its cursed moniker. Curiously, this is somewhat contrary to the western naval expression “Aye-aye” which means “yes.”

Here’s another new curse for the aye-aye -- Hartstone-Rose told The New York Times he believes bats and other species with extremely long fingers may have hidden second thumbs as well. Sorry, aye-ayes – your fifteen minutes of fame are up.

Maybe one of them should give Hartstone-Rose the evil finger.