Saturn has snagged the record from Jupiter for having the most satellites as twenty new moons have been discovered orbiting the “Ringed Planet”. This brings the total moons orbiting Saturn to 82 – three more than Jupiter’s 79.

Astronomers from the International Astronomical Union’s Minor Planet Center were the ones who discovered the twenty previously unknown moons. The newly discovered moons are all approximately three miles in diameter, with seventeen of them orbiting in retrograde (meaning that they orbit Saturn in the opposite direction from the planet’s rotation). Each of the seventeen moons take more than three Earth years to make a complete orbit around Saturn with one of them being the furthest moon so far to have been discovered from the planet. Since they orbit in retrograde, the moons were probably once part of a bigger moon that broke apart. 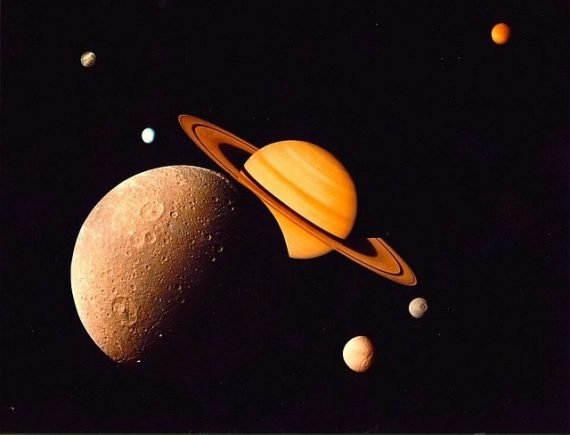 Scott S. Sheppard, who is from the Carnegie Institution for Science and who led the team of astronomers who found the new moons, said, “Studying the orbits of these moons can reveal their origins, as well as information about the conditions surrounding Saturn at the time of its formation.”

He went on to say, “This kind of grouping of outer moons is also seen around Jupiter, indicating violent collisions occurred between moons in the Saturnian system or with outside objects such as passing asteroids or comets.” Sheppard also discovered twelve new moons around Jupiter last year.

Based on their location in proximity to Saturn, it is believed that the moons were created after Saturn was almost completely formed. “In the Solar System’s youth, the Sun was surrounded by a rotating disk of gas and dust from which the planets were born. It is believed that a similar gas-and-dust disk surrounded Saturn during its formation,” Sheppard stated.

He went on to explain, “The fact that these newly discovered moons were able to continue orbiting Saturn after their parent moons broke apart indicates that these collisions occurred after the planet formation process was mostly complete and the disks were no longer a factor.”

The public can help name the twenty newly discovered moons as long as they’re in reference to Norse, Gallic, or Inuit mythology and can be done through Carnegie’s online form.