Throughout the world there are legends and myths of mysterious creatures lurking out of the fringes of what we understand, and these take a myriad of forms as varied as the cultures that have spawned them. While most of the time these beasts and entities are strictly confined to myth and folklore, there are on occasion some that seem to pop out from the realm of human imagination to seemingly inhabit the world for real, perhaps more than mere legend. One of these is an ancient creature spoken of by the Native people of Canada, and which could possibly be tied to one of the strangest series of humanoid sightings on record.

Among the many myths and legends of the proud Cree people of eastern Canada are some that stand out as especially intriguing, and one of these is the creatures known as the Mannegishi. These beings are traditionally described as being small humanoids covered in gray, rough skin, standing around only 3 or 4 feet in height, with extremely long, thin arms topped with 12 fingers, and large, bulbous heads with large glowing eyes, without hair and with no discernible nose, and although always naked they display no sexual organs, making them rather androgynous. The Mannegishi are said to be mischievous tricksters prone to playing pranks on human beings, and while this is typically harmless fun, they are also told of having the treacherous habit of hiding in rocks by the river to capsize canoes. At first glance it seems as if these entities must be purely mythical constructs, but the Cree always saw them as not spirits or magical beings, but rather a very real, matter-of-fact feature of the landscape. Add to this some very odd sightings of creatures that seem to fit the description of the Mannegishi and there has been some talk in cryptozoological circles that there may be more to these creatures than just old Native legends. 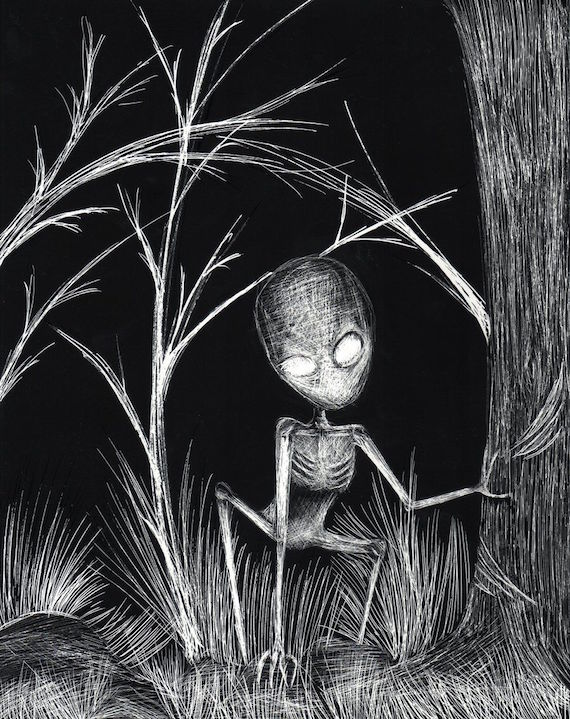 By far the sightings most linked to the legend of the Mannegishi occurred over a period of several days in April of 1977 in the vicinity of Dover, Massachusetts. The string of sightings kicked off on April 21, 1977, with the first and perhaps the most well-known account of what would go on to become known as “The Dover Demon.” On this evening three teenagers by the names of Bill Bartlett, Mike Mazzocca, and Andy Brodie were driving along a darkened road called Farm Street at approximately 10:30 PM when Bartlett noticed some movement atop a rock wall. He didn’t think much of it at first, assuming that it was just a cat or some other animal, but when he glanced in its direction and the glow of the headlights illuminated it more fully he could soon see it was anything but.

Bartlett would claim that he had seen a crouched over hairless humanoid form with an oversized, oval head and huge, lidless eyes that were bright orange and had a glassy sheen to them. Its arms were described as being incredibly long, spindly, tipped with long fingers, and it had a “body shaped like a baby.” Its skin was described as pinkish in color and with a texture “like wet sandpaper.” The outlandish creature apparently stared right at him before slinking off into the night without a sound. When the startled and scared Bartlett told his friends about it, it turned out they had not seen it, and they went back to look for the odd creature but it was gone. Bartlett would later sketch the creature he had seen, and this drawing has become perhaps the most iconic image of the Dover Demon.

Bartlett would swear by his account, and it seems that he wasn’t lying because that very same evening there would be another sighting of what seems to have been the same creature by a totally unrelated witness. At 12:30 AM, just two hours after Bartlett’s sighting, 15-year-old John Baxter was walking along Miller's High Road on his way home from his girlfriend’s house, and as he did he noticed a short figure walking down the road towards him. Baxter allegedly called out to it, thinking it was a person, perhaps a boy who lived nearby, but there was no response. As it approached, Baxter could see that there was something off about the figure, as it was only 3 feet high and seemed to have long, inhumanly thin arms and legs. He picked up his pace to get a better look, and that was when the creature leapt off the road to go running onto some rocks with incredible speed, where it stood leaning against a tree to stare at him. It was described as having a large oval head, two saucer-shaped eyes, and a body that looked like that of a scrawny monkey. Afraid that the creature might be dangerous, Baxter vacated the area as fast as he could. He too would draw a picture of what he had seen, and it looks amazingly similar to Bartlett’s own representation.

The very next evening the strange entity would rear its head again. On this occasion, a Will Taintor and Abby Brabham were driving along Springdale Avenue, on their way to Brabham’s house late at night. The drive was fairly uneventful until in the light of the headlights Brabham claimed to have seen a thin, hairless humanoid creature reminiscent of a monkey down on all fours, with a large head and green glowing eyes, and no apparent ears, nose, or mouth. The sighting was very brief, but Brabham was sure that it was no known animal, and her own sketch of it would bear an uncanny resemblance to those of the other witnesses.

At the time, these surreal reports made the news, and there was a minor panic surrounding it all, and although there were some who thought it was a hoax, none of the separate witnesses knew each other, nor had heard of each other’s reports when they had their own disparate sightings, and all of them sketched pretty much the same thing. Famed cryptozoologist Loren Coleman, who actually interviewed the witnesses and is indeed the one to coin the word “Dover Demon,” said that he was convinced that they were telling the truth, or at least they believed they were. Although sightings after that are rare there have been other accounts of what seems to be perhaps the same thing. One such report comes from as recently as 2004, from a witness named Evan Walsh, of Dover Massachusetts, who claims that he was driving home from a friend’s house at around 11:00 PM when he had his bizarre encounter, of which he says:

As I turned onto Woodland Rd. off of Rte. 16 I was shocked and startled by 3 black crows that flew right in front of my windshield, pretty odd for 11:00. I composed myself and continued driving. I took back roads to Bridge St. in Sherborn to get to Farm St. in Dover. After I went around the hairpin turn (anyone from the area knows the turn) and began to go over the bridge to cross the Charles River I noticed a dark shadowy object move swiftly from the woods to the center of the road where it stopped. It turned its large round head towards me slowly and glared at me with giant round eyes about the size of tennis balls. It stood on 4 legs and was completely hairless. It had no tail either and was the size of a huge dog i.e. Great Dane but much stockier. It had triangle shaped ears and a snickered snout that reminded me of some drawings I have seen in history books on the devil. I came to a stop and starred it down for a good 5 seconds before it slowly turned its head and swiftly disappeared into the woods to my right. I have no idea what it was but I do know it was not a dog or coyote or anything I have ever seen before. 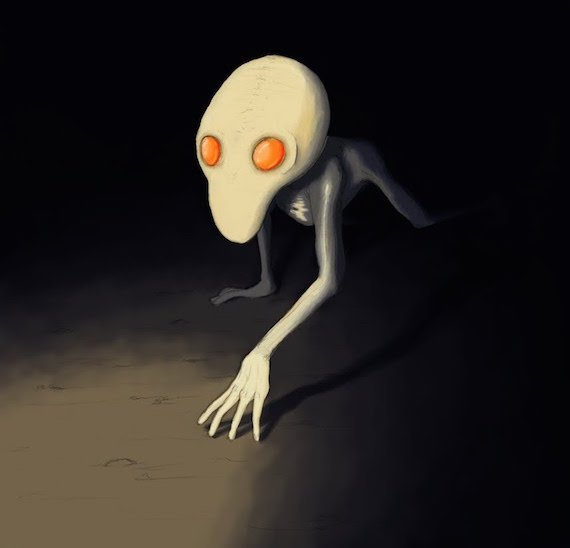 Another recent report comes from a Reddit forum on humanoids encounters, from a witness who seems to have seen something that could have been the Dover Demon. He claims that he had been out exploring a wooded area with his girlfriend and roommate one evening at around 7PM when they were suddenly overwhelmed with a thick sense of palpable dread that none of them could explain. This was followed by an owl flying right by their heads and then jarring sound from off in the distance that sounded “like quieted thunder/metal hitting metal,” and this was where things would get real strange real fast. The witness says:

We all looked at each other trying to make sense of what the hell we just heard and started walking briskly back towards civilization. We heard what sounded like twigs snapping in the woods behind us, and my girlfriend and I turned around to see what made the noise. Peeking from behind the tree the owl just flew behind, was what looked like an impossibly tall ghost white humanoid shape, with one hand on the tree trunk as it peered out from behind it. Before we could get a good look at its face, it quickly retreated back to behind the tree out of our sight again.

My girlfriend and I looked at each other panicked. She opened her mouth to say something, and I told her "Don't talk about it, we need to walk faster." My roommate looked at us confused and clearly scared by what I had just said, so I told her we need to probably run home at this point, which we did. I've told a few people this story, and no one believes me. What I saw was NOT the owl I had seen earlier, this being had a clear ghost white hand on the tree trunk, a neck, and an upper body, and was TALL. I'd say like 7 feet at least (not tall enough to reach the branches of the tree though). I wish I could've made out the face, it was just so dark that the only reason I could see it was because of how white it was.

Other than the large size, this being sounds very much like the Dover Demon, and could be considered a possible sighting. There have been many theories as to what the Dover demon could have been, ranging from the somewhat plausible to the absurd. Of course there is the idea that this was some sort of alien creature or inter-dimensional interloper finding its way into our reality. Another idea is that this was a misidentified animal, including the suggestion that it was nothing more than a baby moose, which seems to not be something that would be mistaken for a hairless slim humanoid with large glowing eyes. The new idea that has been bandied about is of course that this could be actual sightings of that Cree being the Mannegishi, as the region is not far from eastern Canada and the appearance of the two is uncannily similar. Could it be that this is what people are seeing and labeling the Dover Demon, a seemingly mythological creature proving to be very real? Of course this is just one idea of many, and there is no way to know, but it does give some weight to the idea that sometimes mythological creatures can be more than myth, and it is interesting to ponder at the very least.