The rule that one should never look directly at the Sun doesn’t not apply to the Hubble telescope and it’s a good thing for us that’s the case. Otherwise, we’d never know about what astronomers are calling the brightest light energy ever recorded. Aliens burning a lot of leaves? Independence Day on Proxima b orbiting Proxima Centauri? Actually, the real reason for the light is much more interesting.

“Hubble’s observations suggest that this particular burst was sitting in a very dense environment, right in the middle of a bright galaxy 5 billion light years away. This is really unusual, and suggests that might be why it produced this exceptionally powerful light.”

“Burst” gives it away. What Andrew Levan of the Institute for Mathematics, Astrophysics & Particle Physics Department of Astrophysics at Radboud University in the Netherlands, was referring to in a press release on the Hubble Space Telescope web site is a gamma-ray burst – the rare, extremely brief and intensely bright explosions thought to be caused by massive supernovas. This one was discovered on January 14, 2019, by astronomers using the Neil Gehrels Swift Observatory and the Fermi Gamma-ray Space Telescope. The coordinates were immediately sent to fellow astronomers around the world who trained their telescopes at the rare event. Shortly thereafter, time was allocated on the Hubble’s busy schedule to observe the gamma-ray burst, which is now known as GRB 190114C.

It didn’t take much observation to determine that GRB 190114C was special. Its light was measured at 1Tera electron volt (TeV). One electron volt (eV) is the “amount of kinetic energy gained (or lost) by a single electron accelerating from rest through an electric potential difference of one volt in vacuum” (Wikipedia). That makes it a unit of energy, not light. 1Tera electron volts is one trillion electron volts. The Large Hadron Collider (LHC) web site has an interesting way of looking at this amount of energy.

“A TeV is a unit of energy used in particle physics. 1 TeV is about the energy of motion of a flying mosquito. What makes the LHC so extraordinary is that it squeezes energy into a space about a million million times smaller than a mosquito.”

This is also the amount of kinetic energy released by proton collisions in the Large Hadron Collider, making GRB 190114C the ultimate big thing in a small package. It’s such a big deal, the journal Nature published four papers in one day on it. While it’s difficult to pinpoint the exact location of GRB 190114C, the Hubble's Wide Field Camera 3 focused in on a pair of interacting galaxies, with the GRB appearing in the nuclear region of the more massive galaxy – something else that’s never been seen before. 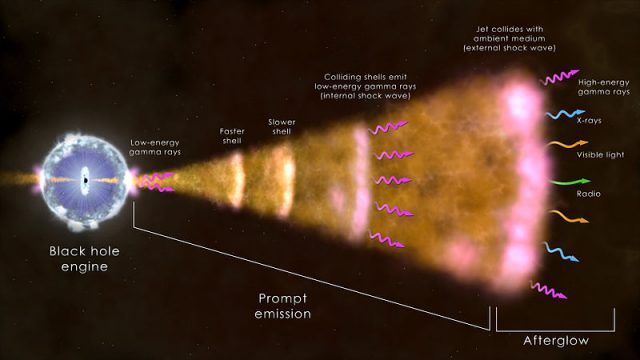 “This new observation is a vital step forward in our understanding of gamma-ray bursts, their immediate surroundings, and just how matter behaves when it is moving at 99.999% of the speed of light.”

Antonio de Ugarte Postigo of the Instituto de Astrofísica de Andalucía in Spain, lead author of one of the papers, described the immensity of the discovery – at least to astronomers. Let’s hope it’s eventually a big deal to the rest of us – at least in our lifetimes.