"He was treated at Misericordia Hospital, he was examined by doctors. He went to the Mayo clinic. The RCMP and the RCAF said they have no explanation for what happened."

What happened became one of the most famous and well-researched UFO encounters in Canada. On May 20, 1967, Stefan (Stephen) Michalak was prospecting near Falcon Lake, Manitoba, when he claims to have spotted two UFOs, one of which landed in front of him. As he got close enough to touch it, the 35-feet-wide silver ship took off, burning his clothes and his body and leaving him sick for weeks. For years, he was analyzed and interviewed and kept meticulous records of everything that happened, including the fact that the Mayo Clinic denied ever seeing him.

Many of these files and artifacts ended up in the possession of acclaimed Canadian UFO researcher Chris Rutkowski, who has joined with the Michalak family to donate his and their files to the University of Manitoba, where other experts and the general public can try for themselves to solve the case that the RCMP, the RCAF, the Federal Department of Health and Welfare, the Manitoba Department of Health and Welfare, Rutkowski and most others who have studied say they have “no explanation for what happened." Close encounters of the Canadian kind, eh?

“The shirt and Stefan Michalak’s hat that were burned in the same incident will also be on public display for the first time! With this lecture, Chris Rutkowski launches the creation of his UFO Archive at the University of Manitoba Archives & Special Collections.” 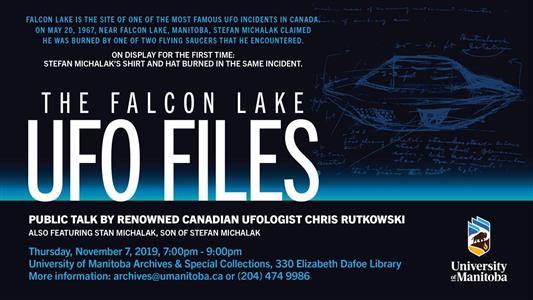 On November 7, 2019, Chris Rutkowski and the late Stefan Michalak’s son Stan presented a large portion of their Falcon Lake Incident fonds (group of documents that share the same origin and that have occurred naturally as an outgrowth of the daily workings of an agency, individual, or organization) and artifacts to the University of Manitoba Archives & Special Collections in Winnipeg.

Are you looking for an interesting place to spend a few weeks of your vacation?

“I have records on more than 20,000 Canadian UFO reports filed since 1989, when I began the annual Canadian UFO Survey. Among those are government and official UFO documents that are not part of the 9,000 that have been made available by Libraries and Archives Canada, so I including those, there may be more than 10,000 official UFO reports and documents in my collection that will donated as well. In addition, I have many boxes and bins of publications and papers on UFOs and related phenomena, such as a few linear feet of my research on geophysical UFOs, several feet of abduction case files (that may be withheld), original manuscripts of my 10 books and accompanying notes, historical UFO files, my files on other heteroclitic Fortean phenomena such as Sasquatch reports, lake monster cases, ghosts, Manitoba hauntings, and general weirdness.”

Of course, the biggest and most interesting fonds concern the Falcon Lake incident, which is a big deal in Canada. How big? In April 2018, the Royal Canadian Mint released a $20 glow-in-the-dark silver coin with Stefan Michalak depicted in full color with a flying saucer above him. If you don’t want dig through the files, Chris Rutkowski and Stan Michalak give you a detailed glimpse in their recent book, “When They Appeared: Falcon Lake 1967: The inside story of a close encounter.” 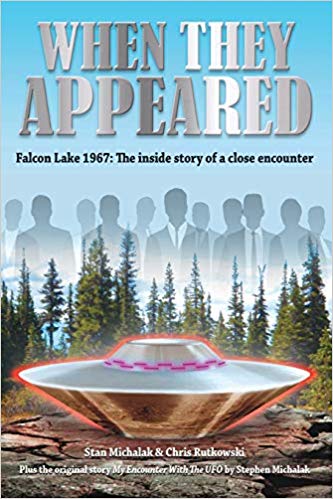 Ufologist Chris Rutkowski is obviously excellent at what he does. Now that he has space in his home once again, Chris continues his research and collects a few more boxes of data on the most interesting and mystifying UFO and paranormal cases in Canada and beyond. Eh?

Mysterious Cases of Organ Transplants and the Paranormal