Anyone who’s read the Hebrew Bible/Old Testament for any reason quickly finds out it’s filled with tales of battles, massacres and killings. As befitting of a patriarchal tome, the heroes in these stories are males while women tend to be bystanders, witnesses or, in some cases, villains. One account where the tables are turned is story of Jael, who killed Sisera, the fleeing commander of a brutal Canaanite army, by driving a tent peg through his temple, pinning his head to the ground. This was the final act after another rare heroic female, Deborah, helped defeat Sisera’s army.

Great stories, especially for girls looking for biblical heroes, but were they true? Archeologists digging at the Bronze Age site of el Ahwat have recently discovered what may have been the actual fortress of Sisera. A great confirmation of biblical history, to be sure, but girls want to know – did they find Jael’s spike?

"What we found in the foundation is a rare corpus of glyptic finds. We found here more than ten scarabs and seals that date to the 13th and 12th century BCE, including some very unique finds. We have here an ibex ivory head, very rare, that is usually found only in places that are in direct contact with the Pharaonic sites in Egypt."

The Jerusalem Post and i24 News both reported the comments of Dr. Shai Bar, an archaeologist at Haifa University, who helped connect the dots that identified this as Sisera’s fort. The design of the building they uncovered at el Ahwat is strongly similar to Bronze Age (3300 to 1200 BCE) structures of the Shardana tribe on Sardinia, the Mediterranean island off the west coast of Italy. Some scholars believe Sisera was a member of this Sardinian tribe. One of the artifacts found there is a chariot lynch-pin, indicating it was probably a military base. El Ahwat was known as a center for iron smelting, possibly the earliest in the area, and the source of its iron was a meteorite found in a nearby mountain range.

"By smelting it, hitting it, and then working with an anvil and a hammer, they could extract the iron and make weapons, daily tools etc." 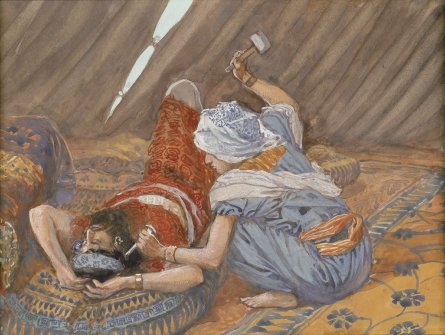 And tent pegs. The Book of Judges in the Hebrew Bible contains the stories of many judges, with the prophetess Deborah being the only woman. It’s here, in a passage that has come to be known as the “Song of Deborah,” that we learn the story of Jael and her deadly tent peg.

Jael was definitely a woman who knew her way around hammers and iron – she was a Kenite, a nomadic tribe known as coppersmiths and metal workers -- and possibly had an iron worker’s strength to swing that hammer and pound that iron spike before she could be overpowered by Sisera. Sorry, girls, the archeologists didn’t find Jael’s heroic spike or hammer, nor the “I must have a hole in my head” skull of Sisera – that deed apparently took place in the Plain of Zaanaim, which is thought to have been not far away between Tiberias and Mount Tabor. 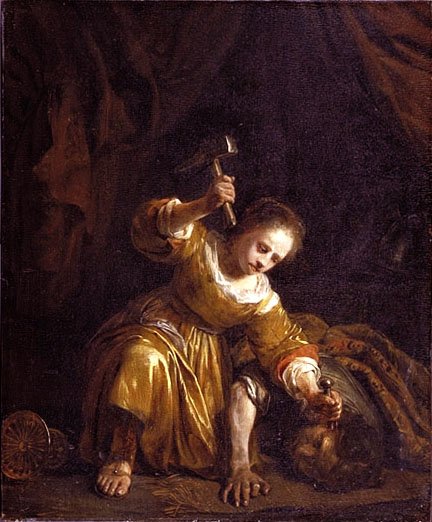 A warning for bad guys to avoid hiding out in the tents of women with large biceps? Definitely.