There’s no better way to learn about a culture than to study what they ate and what they sacrificed instead in their rituals. In the case of the Tiwanaku culture in South America, that has been difficult due to their short existence (less than 600 years) in a time predating the vast Inca empire which gets all of the research and publicity due to its bad luck of being around when the Europeans showed up and wrote their own ‘conquerors’ history of them.

We may finally know more about the Tiwanaku with the recent underwater discovery in Bolivia’s Lake Titicaca near the Island of the Sun of objects and animal bones used as offerings in their religious rituals – rituals which may have taken place on boats. These are discoveries that will help historians not rewrite history but write the true history of the pre-Columbian cultures of South America.

"People often associate the Island of the Sun with the Incas because it was an important pilgrimage location for them and because they left behind numerous ceremonial buildings and offerings on and around this island. Our research shows that the Tiwanaku people, who developed in Lake Titicaca between 500 and 1,100 AD, were the first people to offer items of value to religious deities in the area."

Jose Capriles, assistant professor of anthropology at Penn State and co-author of the paper on the discovery published in the Proceedings of the National Academy of Sciences, reveals in a Penn State press release that the Tiwanaku people not only pre-date the Incas in the area but also pre-date their use of Lake Titicaca and the Island of the Sun for their religion. While there is evidence of their existence in the area, so little is above ground that the researchers decided to search the lake for artifacts that may have been washed in, covered by flooding or tossed in by subsequent cultures. Using sonar and underwater three-dimensional photogrammetry, they scanned the Khoa Reef and then dredged the sediment. In it, they found ceramic puma-shaped incense burners, the bones of sacrificed young llamas, and gold, shell and stone ornaments. (Pictures here.) They knew these were religious objects because the puma was sacred to the Tiwanaku people. However, a non-religious object was the most revealing.

"The presence of anchors near the offerings suggests that officiating authorities may have deposited the offerings during rituals held from boats." 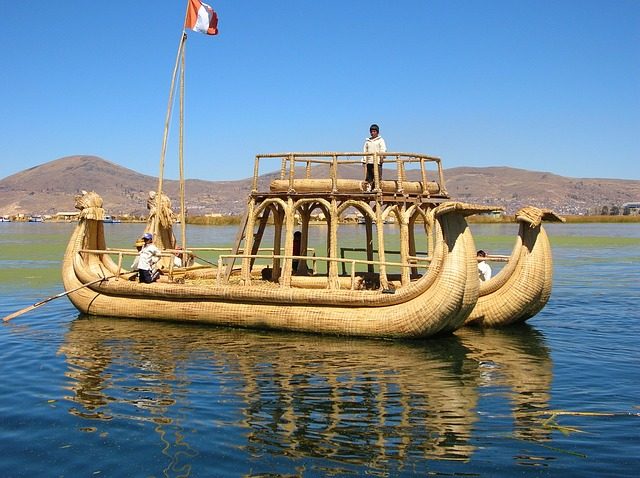 Capriles believes the use of the waters around the Island of the Sun for rituals was the beginning of the end of local religions and the start of a common larger and more organized one – a religion that may have coincided with the rise in power of the Tiwanaku. Other research has shown that the city of Tiwanaku eventually (between 600-800 CE) became a trade center based on ceramics, which were also used for religious rituals. This allowed the Tiwanaku to exert a kind of ‘soft’ control over other peoples in the area by selling or trading artifacts to those coming to Lake Titicaca and the Island of the Sun to worship.

What these newly-discovered artifacts don’t provide is any new evidence to solve the mystery of the sudden disappearance of the Tiwanaku around 1000 CE. Soil samples discount drought as the cause, while toppled monuments and the collapse of the ceramics trade indicate the religion may have fallen hand-in-hand with the government. Or did one cause the other?

Whatever the case, the Tiwanaku were replaced by the Incas, who were conquered by the Europeans. That part of history can’t change, but the details of the rich cultures that existed in Central and South America before Columbus can.