“You can’t keep a good three-fingered mummy down.”

If that’s not a saying in Peru, it should be. Despite efforts by government officials, mummy organizations and skeptics around the world, the scientists and investigators trying to study the mysterious 3-Finger Nazca-Palpa Mummies continue to fight for the right of the world to see what these preserved beings are. On November 6, 2019, four of them gave presentations at the VI Congreso Internacional de Investigación (VI International Research Congress) hosted by
the Universidad Nacional San Luis Gonzaga – the university which is now in possession of the 3-fingered mummies. Fortunately for those not invited (that’s us), Giorgio Piacenza of ExoNews (The Exopolitics Institute News Service) attended the conference and was able to interview some of the presenters, attendees and university officials.

Biologist José de la Cruz Ríos López, who has participated in both historical and DNA tests on the mummies, confirmed to Piacenza that the research is following objective scientific principles and he’s not involved for any monetary gain. He reiterated that it would be impossible to create these three-fingered mummies from human and/or animal parts. (Watch his bi-lingual interview here.) 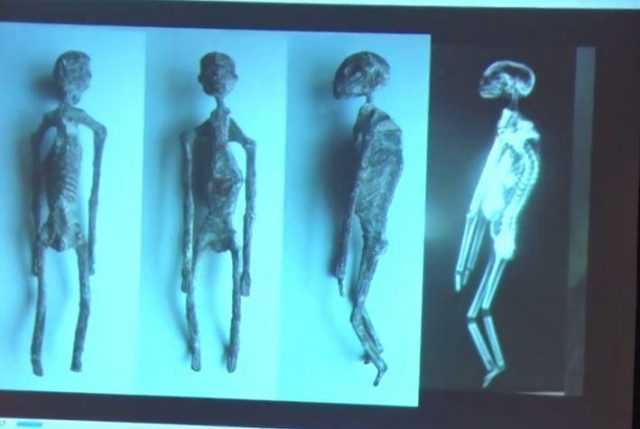 In his interview with Piacenza, University Vice-Rector of Research, Dr. Martin Alarcón Quispe talks about protecting the 3-finger mummies from skeptics, including Peru's Ministry of Culture, while still providing access to both serious scientific researchers and members of the public. The Vice-Rector said that the mummies have a reptile-like skin which could have helped them survive in the desert, and their DNA does not match any known species. However, he wants the process to be scientific, regardless of what the final results and determinations are. (Watch his bi-lingual interview here.)

Next up was Dr. Galeckii Dimitri from Russia, who also confirmed that his research found that the mummies could not have been assembled and in his mind were not fakes. Although they have some human traits, he doesn’t believe they’re human. The skin on the mummies is continuous, not pieced together. He found no evidence of alterations, either physical or chemical, to the mummies, and confirmed that not only were egg-like things seen by X-ray inside the bodies, they were surrounded by a membrane. (Watch his tri-lingual interview here.)

Piacenza talked to Dr. Robert E. Farrell, an engineering professor and researcher with an interest in ufology as well as the 3-fingered mummies. To him, the CAT scans prove these are non-human beings, possibly from another planet. He also explains how carbon-dating can determine the age of Maria, the largest of the mummies, even if she had come from another planet. (Watch his English interview here.)

Finally, Piacenza includes an interview with someone who has been involved with the 3-fingered mummies since their discover was announced – investigative reporter Jaime Maussan. He summarizes many of the unusual findings about the mummies and the resistance to this research that could change human history. (Watch his English interview here.)

If you’re looking for definitive proof that these 3-fingered mummies were once aliens, the interviews won’t provide them. However, the data keeps piling up that they’re something other than human and not fakes.

You definitely can’t keep a good three-fingered mummy down.

Who Were the Officials That Confiscated UFO Tapes During the USS Nimitz Incident?