The Bizarre Hypothesis of the Aquatic Ape

Throughout history there have been scientific theories and hypotheses pushed forward that have either driven us forward as a species or have served to become historical oddities that make us ask "What were we thinking?" It is all part of our stumbling, bumbling quest to feel our way through this morass of mysteries that is the natural world and our universe, and there is not always a clear beacon of light to pave the way forward. While some hypotheses have fallen by the wayside and others have pushed us forward into new realms of knowledge, others have sort of swirled about in a limbo, mere curiosities that cannot be proven or disproven, and one of these is certainly the notion that at some point in human history we were amphibious beings.

The bizarre notion known as the "Aquatic Ape Hypothesis" was first seriously proposed by the marine biologist Alister Hardy in 1960, as a way to try and explain what he thought were a great many quirks in our physiology and evolutionary path when compared to other great apes. Hardy proposed that at one point in our evolutionary history human beings had increasingly turned to aquatic food resources such as fish and shellfish in response to fierce competition from other terrestrial animals. He speculated that this had caused our species to take a different path than the other apes, as we began to swim and wade out into the sea to pursue this semi-aquatic lifestyle rather than life on the savanna, with our bodies adapting to this new way of living in myriad intriguing ways.

In Hardy’s opinion, human bodies show a great many adaptations that he was convinced had come about through this amphibious way of life, including functional hairlessness, subcutaneous fat, regression of our olfactory organ, hooded nose and large sinuses, webbed fingers, big brains, greasy skin with an abundance of sebaceous glands perhaps as waterproofing, as well as our distended larynx, all of which are features common for aquatic animals but not apes, as well as our almost innate ability to swim. Bipedalism was thought to have come about to help us wade about in the water and keep our hands free to forage on the bottom or break open shellfish, and even our predilection for eating seafood, our ability to hold our breath for long periods compared to other apes, and our expressive faces, which could help with visual communication underwater, as well as our our ability to produce speech have gone on to be put forward as evidence.This was all seen as not consistent with the paradigm that we had evolved on the African savanna as long thought, and therefore suggested an aquatic stage of our evolution. 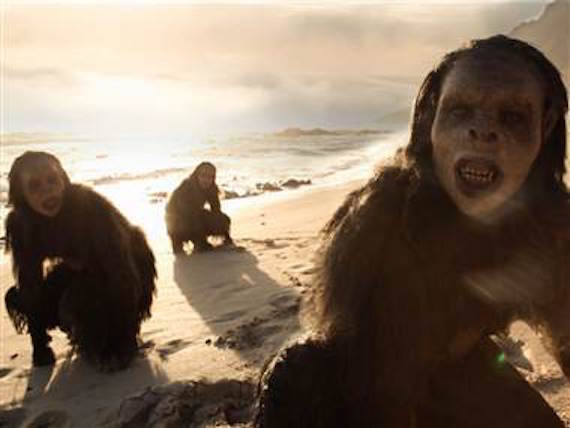 Hardy was not the first to suggest this, as the German pathologist Max Westenhöfer had also played with this hypothesis, but it was Hardy who truly ran with it and brought the whole concept to the public consciousness. It was an idea he had actually been percolating for decades, and only first officially came forward with it after he had become a respected academic and scientist, when in 1960 he presented it all to the British Sub-Aqua Club in Brighton. Although it was met with quite a few raised eyebrows and shrugged shoulders, there would be quite a few who would support the theory and go on to further bolster it, such as famed naturalist Sir David Attenborough, and one proponent of the hypothesis who would catapult it into greater awareness was writer Elaine Morgan. Like Hardy, Morgan believed that humans had gone through a stage in our natural history in which we had turned to the vast food resources of aquatic environments and had gone on to demonstrate convergent evolution of mammals living in these sorts of environments. She would write about the theory in her book The Descent of Women, which would go on to become an international bestseller and really increase the prominence of the Aquatic Ape Hypothesis, and she would go on to pen other books on the matter such as The Aquatic Ape (1982), The Scars of Evolution (1990), The Descent of the Child (1994) and The Aquatic Ape Hypothesis (1997). She has said of the notion:

Waterside hypotheses of human evolution assert that selection from wading, swimming and diving and procurement of food from aquatic habitats have significantly affected the evolution of the lineage leading to Homo sapiens as distinct from that leading to Pan.

There have been many other researchers who have followed up on this hypothesis, such as researchers Michael Crawford and David Marsh, who wrote of this in their book The Driving Force: Food, Evolution and The Future. They are a big fan of the idea that out large brains could not have possibly evolved in a savanna lifestyle, and that they would only have come about through a diet rich in protein and Docosahexaenoic acid (DHA), an omega-3 fatty acid that is found in in seafood, that would only be available with an aquatic lifestyle. Crawford would say of this:

A branch of the line of primitive ancestral apes was forced by competition to leave the trees and feed on the seashore. Searching for oysters, mussels, crabs, crayfish and so on they would have spent much of their time in the water and an upright position would have come naturally. The evolution of a large brain on the savannas of Africa was impossible. The only way it could have happened was with the resources of the marine food-web which initiated the growth and development of the brain in the first place. 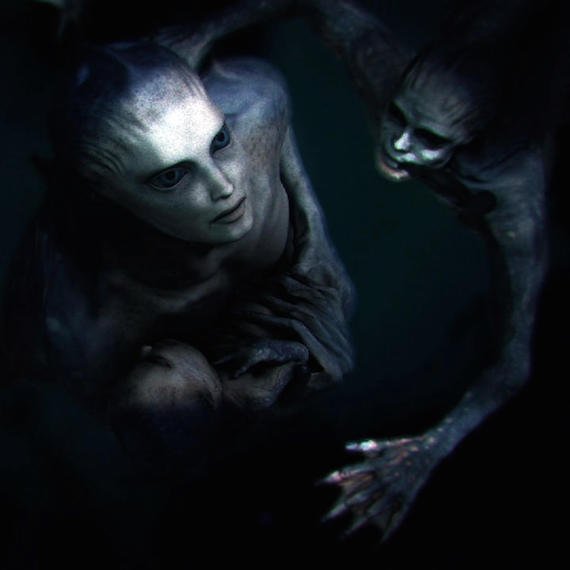 It is all a very intriguing notion, and on the surface it seems that the Aquatic Ape Hypothesis could explain a lot about our many unique attributes that seem to separate us from terrestrial apes, but there are of course a lot of skeptics, and indeed the hypothesis is mostly treated as pseudoscience today and mostly ignored by the mainstream scientific community. Some of the main arguments are that is absolutely no fossil evidence of such a thing ever happening, and many of the adaptations credited to an aquatic lifestyle can be explained in other ways that fit more into the current evolutionary paradigm of the human species. For instance, hairlessness would be more likely due to sexual selection and adaptations to heat loss, whereas bipedalism would allow us to peer out over tall grass and keep our hands free for tool use, and breath control would be related to our development of speech. It has also been pointed out that we have a similar distribution of body fat to other land animals, and also that we are in reality really not that particularly good at swimming after all. There are plenty of explanations for our various quirks that can be fit into the current savanna mold of evolution that do not require some radical shift away. The Aquatic Ape Hypothesis is also criticized for being basically an umbrella theory for a wide variety of adaptations that would have gradually evolved over a very long period of time rather than all at once, meaning they cannot really be lumped together into a single explanation. One professor Chris Stringer of the Natural History Museum, London has said of this:

I think that wading in a watery environment is as good an explanation, at the moment, for our upright gait as any other theory for human bipedalism. But the whole aquatic ape package includes attributes that appeared at very different times in our evolution. If they were all the result of our lives in watery environments, we would have to have spent millions of years there and there is no evidence for this.

Also rather a strike against the hypothesis is that if we evolved to an aquatic environment, then why did we go back out to a terrestrial one and then keep those features? This has not really been adequately explained, and remains a sticking point for those who see this all as wishful thinking and fringe science. While some scientists have sort of just ignored the hypothesis, others have soundly dismissed it and even gone as far as to lump it together with creationism as an untenable and absurd idea. Despite the criticism, the Aquatic Ape Hypothesis has remained very tenacious, and still is discussed and has its staunch supporters to this day. In the realm of cryptozoology it has importance as a possible explanation for sightings of a wide range of entities, such as mermaids or other aquatic mystery beasts such as the Kappa of Japan and many others which could be some offshoot of this amphibious evolutionary history. Is there anything to the Aquatic Ape Theory or is it all a bunch of bunk? Whatever the case may be, as long as it is being discussed it will be out there swirling about in the periphery, and it is probably important to at least understand what it is all about.