The Bizarre Tale of the Bosak Encounter

UFO and alien encounters have always been ground zero for some good old fashioned high strangeness, and within the records of such reports we can find some truly outlandish accounts. Some of these slip through the cracks of time to be forgotten, occasionally dug up by UFO researchers like some long lost fossil buried within the earth, and yet others go a different route. Some supposed alien encounters seem to pick up steam and to launch themselves into the pantheon of great cases regardless of whether they have any evidence to back it up or have only been witnessed by a limited amount of people, and one such case is that of the famous Bosak humanoid encounter.

It was a frigid winter night in Fredric, Polk County, Wisconsin on December 2, 19745, and a local dairy farmer by the name of William Bosak was making his way home from a Co-op meeting at around 10 PM. The night was uncommonly foggy, and coming to the final stretch of rural road that led to his farm he found that a blanket of white clung to everything, severely limiting visibility and forcing him to slow his vehicle to a mere crawl. As he crept along the last mile to his farmhouse he noticed what he took to be a glowing light through the thick mist, which as he drew closer proved to actually be his headlights reflecting off some sort of metallic surface. This was very intriguing to Bosak, as this was his farm and he knew that there should be nothing there to explain what he was seeing, so he slowed down to a near stop and that was when things would get pretty bizarre.

Getting closer and carving through the veil of fog showed that the motionless object was even bigger than he had thought, standing roughly 10 feet high, and he could also see that it was a semi-spherical shape made of what appeared to be some sort of shiny material like glass or highly polished metal. Amazed, Bosak let his eyes wander over the otherworldly structure, and then found something that made it all even odder still. There, near the top of the object, was a section that was illuminated, and which seemed to be a window of curved glass, and sitting within was a humanoid being the likes of which he had never seen. Making it even weirder is that the thing was at the glass and had its hands raised over its head as if in surprise as it looked down at the awestruck Bosak. The witness would describe the creature thusly:

It Looked a good deal like a man, but it had a different looking face than you’d see. It had a kind of cow-looking face. It was covered with dark tan fur, except for its face and chin. It had a square face with hair sticking straight out the sides, the ears stuck out from the head about 3 inches, and the eyes were large and protruding. The ears were calf-like. 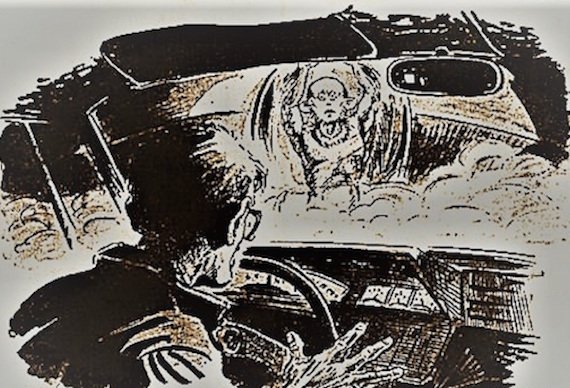 He would later speculate that the “fur” he had seen was perhaps some type of suit, although no collar, fasteners, or openings were visible on it. As for the lower portion of the being, he was unable to get a good look because it was obscured by the soupy fog pervading the area all around them. Perhaps most unusual of all was that Bosak would describe the creature as looking just as startled and scared as he felt himself, and the two regarded each other with fearful eyes for a few moments before a different feeling came over the witness, this time one of intense dread. The initial awe and bafflement was beginning to melt away to leave behind a sort of raw fear. This sense of sudden fright was profound enough that it sparked a desperate panic in him, and he found himself wanting to get out of there as fast as possible.

He would slam on the gas and rocket away in his car as the startled being looked on. A couple of moments into this mad flight, his car careening down a road he could barely see due to the fog, his car headlights dimmed and he heard a sort of “whooshing” sound across the roof of his vehicle. He would explain that there was then what sounded like tree branches brushing along the top of the car, and while under normal circumstances it might have been a fairly innocuous sound, under the circumstances and his heightened level of fear it took on an ominous and unsettling cast. When he went tearing up his driveway and slammed himself shut within his home he breathlessly looked out over the sea of darkened fog to see if the craft was still visible but he could see nothing but the night and roiling mist. He would go back out to the spot where he had had his encounter, this time under the perceived safety of daylight and the absence of fog, yet he was unable to find any real evidence of what had transpired except for a round circle pressed into the earth, measuring 6 feet in diameter. Of the bizarre cow-faced creature and its craft there was no sign, and he was left to ponder what it is he had seen. 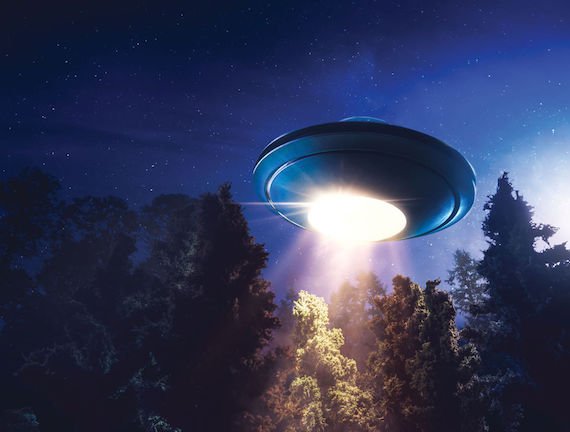 Bosak would keep his otherworldly encounter to himself, and it would not be until several weeks later that he finally came forward with his tale to his family, after which it got out into the wild in a newspaper report from the St. Paul Pioneer-Press, and he was later interviewed by a UFO field investigator from the Wisconsin based Aerial Phenomena Research Organization (APRO) by the name of Everett E. Lightner, to whom he would give the most detailed version of events. He would express regret that he had fled the scene so fast, and said he wished he could have communicated with the entity, stressing that he felt it had been just as scared as he was, that is was not malevolent, and that his fear had been irrational. Bosak also insisted that he was telling the truth and would take a lie detector test to prove it, and also made the cryptic claim that other people had seen the same thing, although who these other people might have been was not made clear. After extensive questioning of Bosak, his friends, and family, Lightner would come to the conclusion that he was an honest, reliable witness, and that he at least truly believed that he had seen what he claimed.

This would have probably remained just one of those one-off cases of bizarre high strangeness that sort of fades off into history if it had not been picked up by the UFO community and published again and again, and it has accrued quite a reputation as a classic case, despite the fact that there was no physical evidence left behind and only one witness. The Bosak case has been so oft-discussed that it has become almost legendary, based on really nothing at all. It is a fleeting, one-off sighting by one lone individual who may or may not have been hallucinating or making it all up, yet it is a beloved account in the annals of UFO and aliens encounters. As such, many theories have been proposed for what was going on here. Aliens, interdimensional entities, even Bigfoot piloting a UFO, it has all been put forward, but really all we are left with is a damn strange case that has managed to etch itself into the mainstream discourse. What did Bosak see out there on his farm, if anything? We may never know, but it seems like a case that is likely to make the rounds for some time to come.