The Mysterious Lost Tomb of the Red Queen

Among Mexico’s numerous ruins left behind by the Mexico’s mysterious ancient Maya people, one site that truly stands out is that of the Maya city of Palenque. Located in the modern Mexican state of Chiapas, amid thick jungle in the Usumacinta River basin, it was once called Lakamha by the Mayas, meaning “Big Water” due to the river and nearby waterfalls, and in its day it would have been quite the sight to behold. Considered to be one of the most sprawling, powerful, and wealthiest city-states of Pre-Columbian Mexico, here was a place of spacious plazas, opulent temple and palaces, extensive administrative buildings, and a total of three grand pyramids, the largest of which is called the Pyramid of the Inscriptions, constructed to hold the remains of K’inich Janaab’ Pakal I, or King Pakal the Great, who ruled from 615 AD until 683 AD during the city’s heyday. Considering how impressive it all is, the ruins of Palenque have become a haven for archeologists, but they also hold strange mysteries that continue to elude us. One of these is the enigmatic lost tomb of a mysterious Maya figure known only as “The Red Queen.”

The tomb might have been lost forever if it wasn’t for a stroke of luck and chance discovery by Mexican archeologist Fanny Lopez Jimenez. In 1994, Jimenez was at a temple called Temple XIII, right next to the imposing Pyramid of the Inscriptions, in order to do routine restoration work on the temple’s stairs. It was actually quite a mundane assignment, and Jimenez had not been looking to make any groundbreaking or surprising discovery, but she would come across one nevertheless. As she went about her work she noticed a peculiar crack under the stone stairway that was obscured by brush and appeared to have been at some point covered over with masonry. A cursory inspection with her flashlight showed that the crack led to a secret passageway that led off into the darkness and seemed to lead to a sealed door. The temple had been explored before without uncovering any of this, and realizing that this was something new and had not been discovered before at the temple, Jimenez notified her boss, eminent archeologist Arnoldo Gonzales Cruz, with the National Institute of Anthropology and History of Mexico, and the journey into an unknown and unexplored corner of history would begin.

The team moved in and removed the masonry that was blocking the finding to reveal a darkened passageway, blocked and cluttered with various debris and leading off into the murk into mystery. Making their way down the secret passage brought them to another passage that was formed of meticulously cut limestone blocks. Along this corridor were found three chambers, two of which were wide open and found to contain little other than signs that rituals had been carried out there. Yet there was another chamber that seemed to be still sealed as it had been for over a thousand years, walled over and totally covered over with stucco as if someone had not even wanted the presence of the tomb to be known at all. The team at this point was unsure of how to continue, as they had no idea what lay beyond that wall in the ancient darkness or why this one chamber was still blocked off, and to break through had the potential of damaging whatever priceless treasures were inside. It was finally decided that they would create an opening just large enough for them to peer into the sealed chamber, and what they found beyond would amaze them.

There beyond that ancient wall was found to be what was by all appearances a fully intact tomb, measuring some 14 by 8 feet, unadorned but with an ornate, massive limestone sarcophagus sitting within the gloom taking up most of the room. This was enough to prompt them to go about gaining access to the tomb by removing each wall block, where they found the grisly sight of two skeletons sprawled out on the floor, one of a young boy and another of an adult woman, both of which showed evidence of horrific injuries consistent with a sacrificial killing, possibly servants of the one within the sarcophagus for the purpose of joining them in the afterlife. Nearby these two bodies were found some miscellaneous bones and teeth, some of which had been inlaid with jade for reasons unknown. 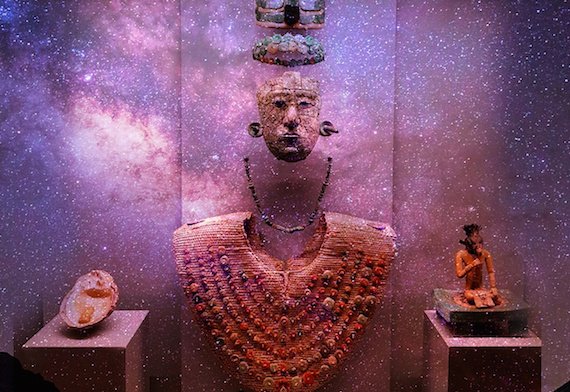 It was fairly obvious that whoever was in the sarcophagus had been important in life, so it was with great care that they began the arduous process of lifting the massively heavy, thick limestone lid, which at its top featured a small circular aperture. When the lid was finally moved, the interior of the sarcophagus was found to contain a vivid green, jewel encrusted funerary mask, various fragments of jade pearl objects and shells, four obsidian blades, a jade figurine, as well as human remains of a woman, but what made it truly strange was that the entirety of the inside of the sarcophagus had been liberally coated with a fine, bright red powder, which was found to be mercuric sulfide, also called cinnabar, which was usually used as a pigment in Maya artwork but was also quite toxic in large amounts. Quite why such a copious amount of this poisonous stuff had been dusted over everything is unclear, probably as a show of status, but it was enough to earn her the nickname “The Red Queen,” her real identity a mystery.

Analysis of the Red Queen’s remains found that she had stood about 5 feet high, that she had been between 50 and 60 years old at the time of her death, and that she had very little wear on her teeth, suggesting she was of high status. DNA analysis would show that she was of Maya stock and that she bore no blood relation to King Pakal, buried in the huge adjacent pyramid, although she would have been alive at the time of his rule. Considering this, and the fact that she was so extravagantly interred right next to the Pyramid of Inscriptions, it is speculated that she might have been a wife of the king named Tz’ak-bu Ajaw. However, there are no markings or descriptions to identify her in the tomb itself, so this is just speculation for now. Who was the Red Queen? time may tell, but for now she remains a nameless specter from the past.

143 New Nazca Lines Discovered in Peru, One with the Help of A.I.