In the 18th and 19th centuries a whole other world existed beneath the bustling streets of London, England. Here down in the dank depths of the earth were thousands of miles of tunnels and sewers that had been built over the centuries without much planning involved, much of this sprawling network of sludge filled subterranean passageways long forgotten and unexplored. Here among these mysterious stench-ridden depths and tunnels leading off into black nothingness many legends, myths, and wild stories were birthed, including tales of a race of bloodthirsty ferocious giant black swine.

Many of these rumors came to light when brought back by to the civilization above by the many sewer explorers called “toshers.” These sewer hunters were so called because many of them went down into those dim underground networks, wading out for miles through the muck dodging aggressive rats for the purpose of salvaging anything of value at all that they could find washed down from the world above, called "tosh," including pieces of silver cutlery, nails, bits of copper, coins, lost jewelry, and other miscellaneous bits of metal and junk lodged in the slime. It was dangerous, thankless work, also highly illegal after 1840, and these men in appearance were almost very like sewer monsters themselves, with journalist Henry Mayhew once writing of them in his 19th century series of books documenting London’s poor, titled London Labour and the London Poor, in which he says of the toshers:

They may be seen, especially on the Surrey side of the Thames, habited in long greasy velveteen coats, furnished with pockets of vast capacity, and their nether limbs encased in dirty canvas trousers, and any old slops of shoes… provide themselves, in addition, with a canvas apron, which they tie round them, and a dark lantern similar to a policeman’s; this they strap before them on the right breast, in such a manner that on removing the shade, the bull’s eye throws the light straight forward when they are in an erect position… but when they stoop, it throws the light directly under them so that they can distinctly see any object at their feet. They carry a bag on their back, and in their left hand a pole about seven or eight feet long, one one end of which there is a large iron hoe. 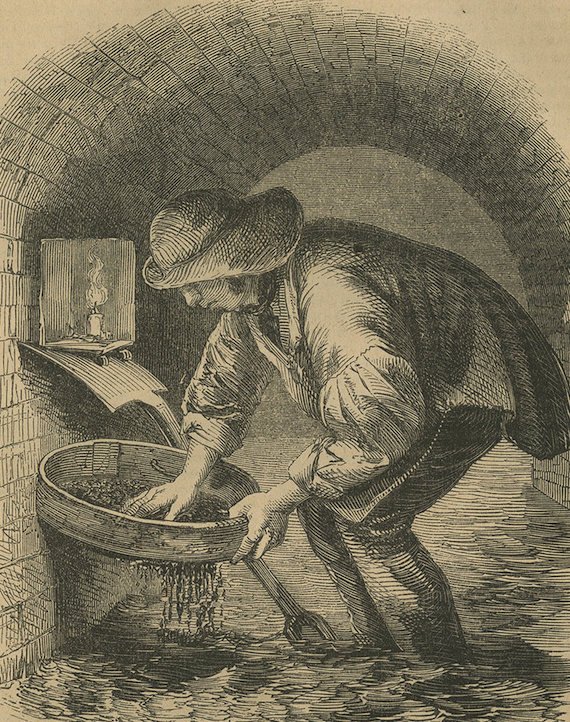 The threat of cave-ins, getting hopelessly lost in the stagnant labyrinth of sludge, and toxic fumes was always present, but it could sometimes be rather lucrative for them, and so these toshers penetrated through the rat-infested gloom out into those meandering passageways and sometimes coming back with wild stories to tell. One of these were the tales of some type of outsized black swine that trudged through the eternal darkness of these tunnels, monstrous in form and rooting through the trash and offal of the sewers, particularly in the vicinity of an area of the city called Hampstead. These freakishly massive hogs were said to be extremely vicious, often charging out of the gloom to attack anyone who came too close, and the toshers claimed that they were ever vigilant of the presence of these beasts during their explorations, even arming themselves to protect against them. The common idea at the time was that these pigs had ended up here after a pregnant sow had become lost in the sewers, after which she had given birth and generations of inbreeding had turned them into monstrosities. Henry Mayhew would write of them:

The story runs that a sow in young by some accident got down the sewer through an opening and, wandering away from the spot, littered and reared her offspring in the drain, feeding on the offal and garbage washed into it continuously. Here, it is alleged, the breed multiplied exceedingly, and have become almost as ferocious as they are numerous.

It was Mayhew’s accounts, which he had gleaned through numerous conversations with the toshers, that put the rumors of these giant black swine into the limelight, and it soon took off to become a popular story among London’s populace. The idea that hulking, brutish black swine were marauding through the foul, stinking darkened tunnels beneath their feet was like something from a horror story, and it kept the public enthralled. The media ate this stuff up, and an article in the Daily Telegraph on the 10th of October 1859 mentioned these black swine in an editorial which reads:

This London is an amalgam of worlds within worlds, and the occurrences of every day convince us that there is not one of these worlds but has its special mysteries and its generic crimes. Exaggeration and ridicule often attach to the vastness of London, and the ignorance of its penetralia common to us who dwell therein. It has been said that beasts of chase still roam in the verdant fastnesses of Grosvenor Square, that there are undiscovered patches of primaeval forest in Hyde Park and that Hampstead sewers shelter a monstrous breed of black swine, which have propagated and run wild among the slimy feculence, and whose ferocious snouts will one day up-root Highgate archway, while they make Holloway intolerable with their grunting. 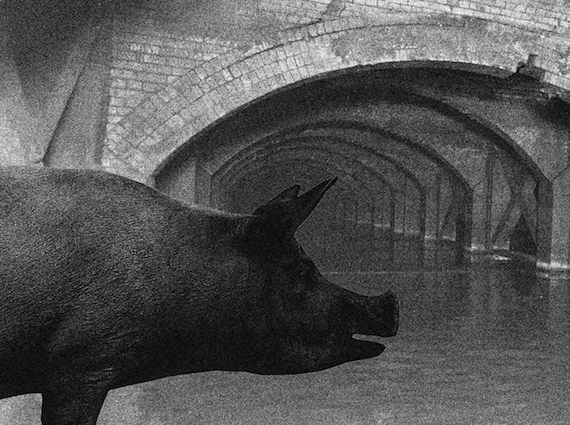 Stories of the Black Swine of Hampstead circulated for many years, becoming somewhat similar to the tales of alligators in the sewers of New York City, until the London sewers were completely overhauled in 1858 and the tales began to die out. With old stories like this without any real official eyewitness accounts, and all occurring in an age of sensationalist newspaper articles and tall tales it is hard to know how much any of the Black Swine tale is based in reality and how much of this is pure urban legend. It mostly all seems to originate with Mayhew’s accounts, so perhaps he was having a little fun, although he insisted that he did not make any of it up, and once wrote, “This story, apocryphal as it seems, has nevertheless its believers.” There is also the possibility that this was all just a spooky campfire story told amongst the sewer hunting toshers, a little urban legend passed amongst their ranks that got out into the wild and took on a life of its own. Or were there really mysterious feral pigs running amok in the muck? Whatever the case may be, the story of the Black Swine of Hampstead is a curious little piece of London history and a strange story that seems to have mostly faded into the mists of time.

These tales of hideous nefarious monster swine may surely be urban legends spawned by the fears of these brave individuals who ventured through these filthy passageways and this realm that was a stranger to the city lights above. However, even if it is all urban legend one wonders if there is perhaps any grain of truth to it all, and whether there really were strange things from beyond our understanding dwelling in those depths. Whatever the case may be, it is a fascinating look into another time, and a rather sinister glimpse of a part of London’s historical landscape that has largely faded and been forgotten, yet has lost none of its macabre allure.