The Mysterious Psychomanteum: A Forgotten Method of Contacting the Dead

Ever since we have been aware that the spirits of the dead may exist, we have sought to contact them. There is an incredible allure and desire to wanting to get in touch with those who have passed, and over the centuries there have been many efforts made along these lines. From spirit mediums, to Ouija boards, to more modern devices such as EVP recordings and "spirit boxes," we just can't resist the urge to try and make contact with the world of the dead. Some of these methods have been somewhat lost to time, and one of the more interesting of these is an ancient divination technique that fell through the crack of history only to be revived in modern times.

One method of contacting the dead that seems to have been largely forgotten in modern times is a tool known as the psychomanteum, which can be roughly translated as “theater of the mind.” The basic concept comes from the Greek traditions of the nekromanteion, which basically translates to “oracle of the dead,” its origins with the ancient Greeks and their elaborate temples of the dead, huge temples that were devoted to trying to contact deceased loved ones and other spirits. In these enigmatic temples there would be carried out a series of rituals, wherein they would begin with a ritual meal, move on to an animal sacrifice, and then file into a long, silent, and dimly lit spooky hallway holding a polished cauldron of water, oil, or allegedly sometimes even blood at its end. The water or other liquid would act as a sort of mirror, and it is from within its depths that images and messages from the realm of the dead would bloom up to the surface. In essence, it was a form of scrying divination, which uses a reflective surface to conjure up spirits or see the future, with the sensory deprivation of these places serving to enhance the strange effects. These psychomanteums were apparently quite popular in ancient Greece, with the great Homer’s Odyssey even making mention of them, but they would sort of fade into time until later centuries resurrected the practice.

The modern awakening of the psychomanteum can be credited to a prominent researcher and pioneer of studies of near death experiences by the name of Dr. Raymond Moody, who in the 1990s was fascinated by mirror scrying practices around the world and in particular those of the ancient Greeks with their nekromanteion. He sought to create his own psychomanteum, and he did. Moody’s own iteration of the device consisted of a tiny darkened room no bigger than a walk-in closet, completely closed off from sunlight, in which was situated a chair sitting in front of a very large mirror at a 45 degree angle to the floor in order to eliminate the reflection of the participant. It would have been almost like an easy chair set up in front of a big screen TV, but this screen was not meant for entertainment, but rather the very serious business of gazing into the land of the dead. Behind the chair was a dim lamp, no brighter than a candle, which would cast just enough faint illumination to allow one to see what would appear within the mirror when summoned. Moody himself would describe his device thusly:

A room was set aside for use as an apparition chamber. At one end of the room a mirror four feet tall and three and a half feet wide was mounted on the wall. The bottom edge of the mirror was three feet above the floor. A comfortable ‘easy chair’ was prepared by removing its legs so that the top of the headrest was about three feet above the floor. The chair was placed about three feet from the mirror and inclined slightly backward. This was done for comfort, but also to keep the reflection of the gazer from being seen in the mirror. In effect, the angle of the chair created a clear depth view of the mirror, which would reflect only darkness behind the person who was gazing. The result was a crystal-clear pool of darkness. This pool of darkness was assured by the black velvet curtain draped all around the chair from the ceiling. A curved curtain rod was used to allow the drape to surround the area around the chair and mirror, creating a curtained booth or chamber. Inside this apparition chamber and directly behind the chair was placed a small stained-glass lamp with a fifteen-watt bulb. When the lights in the room were turned off and the outside light excluded by blinds and thick window curtains, this tiny light provided the room’s only illumination. 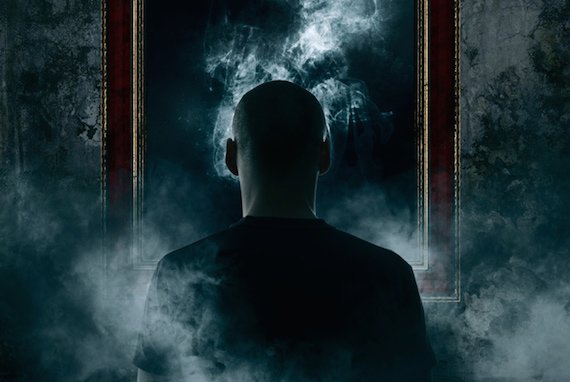 Moody had various subjects experiment with his psychomanteum, sitting them at the chair and having them intently focus on the lost loved one they wished to contact. These subjects were carefully selected for the experiment, and after a briefing the sessions would begin in earnest. The participants were encouraged to relax as much as possible and to focus on the one they wished to contact, preferably bringing photographs or some personal item of the deceased to boost the process, and the actual session would last around 1 hour. The results were apparently startling, with many who stepped out of that chamber doing so with odd stories to tell.

According to Moody, there was a wide range of experiences reported by over a quarter of the participants of the initial study. For some they told of feeling a comforting presence in the room with them or of hearing the voices of their deceased beloved. Others actually experienced a physicality to the experience, with the spirit allegedly reaching out to touch, caress, or embrace them, and conversations with the deceased were not uncommon, as well as even smelling the departed. It also often occurred that an apparition would appear in the mirror and just step through the veil right there into the room, walking about and looking very much as if they were still fully alive. One report of such an experience comes from a witness who said:

I was sitting in there, and all of a sudden it seemed that these three people stepped right into the room all around me. It looked as if they stepped out of the mirror, but I felt that such a thing couldn’t be, so I was shocked. I didn’t know what was going on. For a moment I thought it was someone trying to play a joke on me, so I reached up quickly, trying to touch them, and when I did, my hand hit the curtain. I still saw them. I got a look at all three. My sister, Jill, was there, but two others also, my friend Todd and my grandfather. All of them looked very much alive, just looking at me.

Occasionally the subject would conversely claim to have actually stepped through the mirror into the spirit world, and still others have even said that they received glimpses of future events. In every one of these cases the witness was adamant that this was no hallucination but all very real, and these contacts were always very vivid and realistic. Interestingly, at times the spirit seen wasn’t even the one the participant was trying to contact at all. Even Moody himself experienced his own brush with the paranormal within the chamber, claiming to have contacted his dead grandmother, who appeared in the mirror to him looking young and healthy and very real, of which he would say “In no way did she appear “ghostly” or transparent during our reunion. She seemed completely solid in every respect." 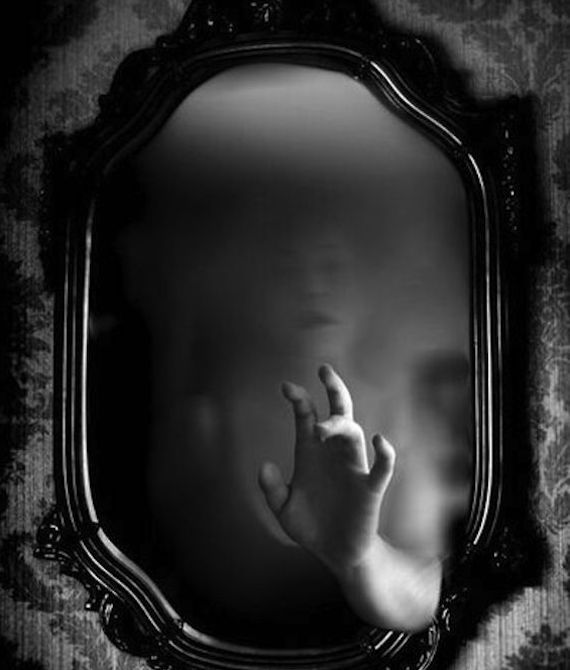 Moody has recorded hundreds of experiences with his psychomanteum over the years, and has stated that regardless of whether this is all really indicative of contact with the spirit world or not, his device has an overwhelmingly comforting effect that can help those dealing with bereavement. He would compile all of this information into his groundbreaking 1993 book “Reunions: Visionary Encounters With Departed Loved Ones,” and he has continued his work with the psychomanteum right up into the present, claiming that 85% of people who try it have visions and experiences they cannot explain, and even a portion of those who have not seen anything at the time will suddenly be beset with visitations by the dead loved one in their homes after the sessions have been completed, a phenomenon that Moody calls “take out visions,” or basically delayed contacts.

Is this all indicative of some sort of contact with the spirit world? Or is it merely visions conjured up by the subconscious mind under conditions favorable for it to emerge? It is not really known, and the answers are not nearly close to being grasped. What we do know is that there is this device, and that people have had some powerful experiences with it. Make of that what you will, but perhaps the only way to truly know is to try out the "theater of the mind" yourself.