The Mystery of the Ethiopian Death Birds

It is amazing just how many strange tales of mysterious creatures lie buried within historical accounts and which have never really seen the light of day. Some accounts just seem to have faded away into the mists of time to become little-known conundrums that few have heard of and which may never be properly addressed or answered. One such very obscure account comes from an explorer in Africa in the 1930s, who allegedly came across the menacing blood drinking monsters known as the Death Birds.

The rather chilling and mysterious case of what have come to be known as the “Death Birds” originates from the early 1930s, when an archaeologist and anthropologist by the name of Byron Khun de Prorok was somewhere near Nek’emte, in the Welega division of Ethiopia on an expedition. During his excursion to this exotic and at the time little explored land, Prorok found himself passing through a region known as Walaga, and it was here where he would first hear of the mysterious “Devil’s Cave,” which supposedly lay nearby where he was staying at a place called Lekempti. According to the local who relayed this information to him, the cave's depths were prowled by demonic spirits that took the form of hyena men, as well as flocks of bloodthirsty winged beasts known as “Death Birds,” and that it was a place few dared to tread and from which even fewer made it out alive. Of course this was compelling enough that Prorok just had to see it for himself.

He had a hard time finding anyone willing to guide him to the notorious cave, as most locals were too terrified to go anywhere near it, but he was finally able to bribe a guide brave or greedy enough to take him there, and so they set off into that wilderness towards the cave. Ostensibly, Prorok was hoping to find ancient cave paintings, but there was no denying that he was also intrigued by the tales of spirits and bloodsucking flying monsters, so when they approached the rocky cliff face up which the cave supposedly was perched, it was undoubtedly with not a little trepidation. As Prorok looked up the slope towards where his guide pointed with a wavering finger, he wondered what lie in wait for him up there, and the guide refused to go any further. 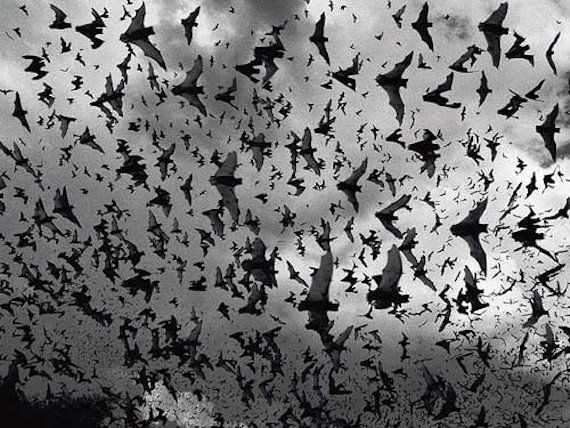 The undeterred Prorok clambered up the bleak rocky escarpment by himself, armed with a rifle and prepared for the worst, and he soon found the entrance of the cave, blocked by several boulders perhaps put there by fearful locals hoping to seal in the evil they believed dwelt there. He was able to push them to the side with great effort and penetrate into the murky confines within, but his progress was supposedly soon halted by the sight of several hyenas barreling out of the gloom towards him. Rather than intent on attacking Prorok, it seemed the animals were terrified of something lying out of sight in the blackness beyond, and wished merely to escape, but the startled explorer nevertheless shot at the beasts as they ran by. When he went back out into the light of day to watch the panicked hyenas depart, he noticed that some local goat herders had gathered around the base of the cliff out of curiosity, and Prorok descended to see what they wanted.

According to his account in his 1933 travelogue Dead Men Do Tell Tales, the goat herders were found to be emaciated, looking almost like zombies, all skin and bones, and they explained that the Death Birds were indeed real, and had killed and sickened many of their flocks and fellow villagers with their nightly feedings. The two goat herders begged Prorok not to continue with his plans to enter the cave, but the explorer was dead set on his mission and made his way back up to the dim entrance. As he pushed once more into the dank bowels of the cave he became aware of the vast fluttering of thousands of wings, and these proved to be exceptionally large, bat-like creatures with wingspans of 18 inches, that began flocking around him and which ultimately were disturbing enough to send Prorok scrambling for the light of day beyond the entrance. 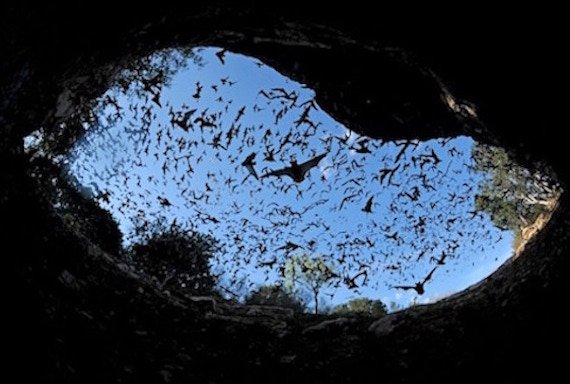 The explorer went back down the cliff face to where the goat herders were still gathered and seemingly surprised that he had made it out alive, and they told him that what he had seen in there had been the nefarious Death Birds. According to them, these creatures spewed forth from the cave at night to feed upon their livestock to suck them dry, even attacking human beings. Indeed, they said it was due to the bites of these creatures that they had lost their health and vitality, showing him the myriad puncture wounds on their skeletal arms to prove it. The goat herders then took the curious Prorok to their village, where he saw that many of the residents and even the elders were equally sickly and skeletal looking, with many of them wrapped in bloody rags, and they also showed him the carcasses of goats that had been sucked dry of blood by the fearsome Death Birds. This was all the doing of the Death Birds, they said, and that it was indeed why they had blocked the cave with boulders.

After this it is unclear what happened with regards to the Death Birds, as this is the only mention made of them in Prorok’s records and they are not reported anywhere else, leaving us to wonder what these animals could have been. The case was covered in cryptozoologist Karl Shuker’s book The Beasts That Hide From Man, and he put forth some possibilities, such as that these must have been some form of sanguinivorous, or blood drinking, bat such as the vampire bat, but as far as we know all three known species of these types of bats are found only in Mexico, Central and South America, meaning that this would be a very unique find indeed all the way over in Ethiopia. Shuker says of the significance of this:

What all of this means in relation to the Ethiopian death bird is that any bat thriving solely or even predominantly upon a diet of blood is inevitably a much-modified species, rigorously adapted for such a lifestyle - rather than a mere opportunist species that in certain localities has switched (through some unusual set of circumstances) from its normal diet to a sanguinivorous existence. In other words, if de Prorok's account is a truthful one, then surely the death bird must be a species new to science? After all, there is currently no known species of Old World bat that is a confirmed dedicated blood-drinker. This, then, is plainly one plausible answer to the death bird mystery.

Shuker also puts forward the idea that the wraith-like physical symptoms of the villagers could have been through some bat-born disease carried in the feces or in lice or ticks from the animals, and he even concedes that it might all be down to African superstitions and myths. It is also quite possible that this was just an exaggerated tall tale told by Prorok to spice things up, and this certainly wouldn’t have been the first time an explorer told tall tales. Ultimately Shuker says of this:

Clearly, then, the case of the dreaded death bird and the stricken herders is far from being as straightforward as it seemed on first sight, and may involve any one, or perhaps even more than one solution. Also well worth noting is that de Prorok was (in)famous for gross exaggeration and imaginative narratives, so it is by no means evident how much of his testimony concerning his visit and experiences relating to Devil's Cave can be taken as fact.

One aspect of the case that is evident, however, is the necessity for a specimen of the death bird to be collected and formally studied. Only then might the resolution of this mystifying and macabre cryptozoological riddle be finally achieved.Yet in view of the perennially uncertain political climate associated with Ethiopia in modern times, even this is unlikely to prove an easy task to accomplish. Until then, the secret of this purportedly deadly, unidentified creature will remain as dark and impenetrable as the grim cave from which its winged minions allegedly issue forth each night to perform their vile abominations upon the latest tragic campful of doomed, defenceless goatherds.

So what were the Death Birds Prorok spoke of? Were these some sort of new type of vampire bat, or something else altogether? Was it just superstition and legend, a tall tale, or maybe even something more supernatural in nature? No one really knows, and there is not much in this one historical report to go on. In the end the story of the Death Birds of Ethiopia remains an enigma, and a relatively little-known cryptozoological historical oddity.