The Oxygen on Mars is Acting Really Weird

The more we study Mars the weirder it becomes. Which should come as a surprise to no one. It's an entire planet that's not Earth. It would be really strange and disappointing if we already figured out Mars' secrets before we even got over there. Probably the biggest question regarding Mars is whether the red planet ever supported life and if it did in the past, could it still be harboring alien life today? Those in the camp of "duh, of course there are Martians" may have another boost to their argument as a recent NASA press release reveals that the levels of oxygen (which you might know as one of the main things we need to not die) on Mars are behaving rather strangely.

NASA already found that methane levels on Mars act differently than scientists thought they should. Methane is, like oxygen, a "biosignature" gas because it is a byproduct of carbon-based life (put simply, it's farts). Last year, the Curiosity rover discovered that levels of methane in Mars' atmosphere fluctuate based on the season, rising dramatically during Mars' summer and spiking periodically at seemingly random times, for unknown reasons. Coupled with the organic matter that was found on Mars at nearly the same time and some eyebrows were certainly raised.

Now scientists have found that levels of oxygen behave the same bizarre way as the levels of methane, cycling periodically with the greatest concentration during the summer months. NASA's Curiosity rover analyzed the atmosphere in Mars' Gale Crater over the course of three years and found that while other atmospheric gasses increased and decreased in line with scientists' models, oxygen levels rose in the spring and summer months by up to 30% before falling "back to levels predicted by known chemistry." According to a paper recently published, this suggests that something was producing oxygen and then taking it away. Cue the music.

NASA is far from convinced that the likely source is biological, however. Melissa Trainer, a planetary scientist at NASA’s Goddard Space Flight Center who led the research says:

“We’re struggling to explain this. The fact that the oxygen behavior isn’t perfectly repeatable every season makes us think that it’s not an issue that has to do with atmospheric dynamics. It has to be some chemical source and sink that we can’t yet account for.” 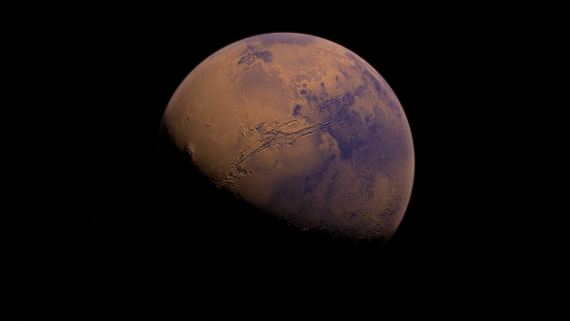 Oxygen and methane are biosignatures, yes, but they are also present in high concentrations in the Martian soil. Scientists working on the problem say that it is much more likely the cause is geological rather than biological, but so far all of the geological explanations have come up short. Timothy McConnochie, who co-wrote the paper says:

"We have not been able to come up with one process yet that produces the amount of oxygen we need, but we think it has to be something in the surface soil that changes seasonally because there aren’t enough available oxygen atoms in the atmosphere to create the behavior we see.”

So scientists are, at the moment, completely at a loss. Melissa Trainer invites anyone who can help to do so:

“This is the first time where we’re seeing this interesting behavior over multiple years. We don’t totally understand it. For me, this is an open call to all the smart people out there who are interested in this: See what you can come up with.”

Before you go spouting off about how it's definitely aliens consider this: there would need to be a population of something that springs to life so quickly that it raises oxygen levels by 30% in the course of half a year. That, too, is ridiculous. But who am I to say? It's Mars. Mars is weird.

Doll’s Head Trail: The Creepiest Hike In The United States