What's more embarrassing than accidentally breaking an ancient artifact? If said ancient artifact is a 1,700-year-old rotten egg. That's what happened to a group of archaeologists in Britain after discovering four chicken eggs deep within a Roman wishing well. Three of the eggs broke. You might think, surely after almost two millennia, there's no way that there could be any actual egg left within the shell, right? Wrong. These were extremely well-preserved rotten eggs (which is apparently not an oxymoron). According to the archaeologists unlucky enough to crack open these bad boys, the ancient rotten eggs released a "potent stench." Which is British archaeologist language for "it stunk up the joint something ferocious."

The surviving egg is the only Roman chicken egg ever found in Britain. Which is one chicken egg more than anyone would have likely guessed. According to project manager Stuart Foreman:

“There’s a very good reason it’s the first and only find in the UK.

In a pit that has been waterlogged for thousands of years you get things that would never survive in a dry environment. But it’s incredible we even got one out. They were so fragile.” 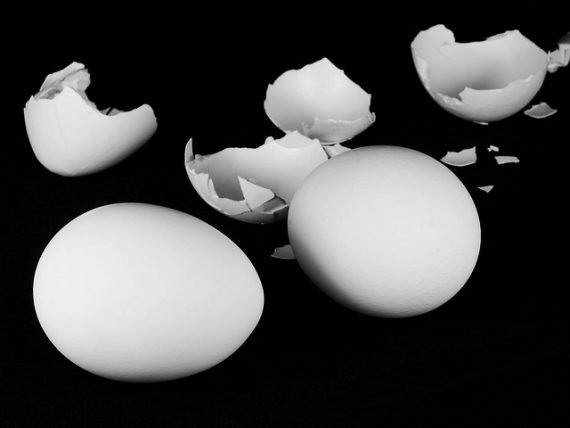 Although the four rotten eggs were the true treasure, archaeologists also found dozens of coins, shoes, wooden tools, and a “very rare” basket.

The pit, in Aylesbury, Buckinghamshire, is believed to have been a Roman wishing well, according to researchers from Oxford Archaeology. It acted as a roadside stop for people to quickly petition the gods for favors before going on their merry way. According to researcher Edward Biddulph:

“Passers-by would have perhaps stopped to throw in offerings to make a wish for the gods of the underworld to fulfil. The Romans associated eggs with rebirth and fertility, for obvious reasons. We have found chicken bones and broken eggshells in Roman graves in Britain before, but never a complete egg.”

Researchers believe that the wishing well was originally a beer-making pit used to malt grains before transitioning into a divine mailbox sometime between the 2nd and 3rd centuries AD.

The only other preserved Roman chicken egg was found in Rome in 2010 under the hand of a buried child. Which is very strange and one of those things you shouldn't think too long about.

This latest rotten egg will be preserved in acid-free tissue in a plastic box and stored at Oxford Archaeology’s headquarters until it goes on display at Buckinghamshire County Museum. That's right, if you find yourself in England you too can see the amazing ancient rotten egg, one of the rarest Roman artifacts ever discovered. Science is weird.