Atomic Cannibal Ants on the Loose!

Bees. Smees. Everybody's been yammering on about bees for years! From the killer bee hysteria of the 1970s, to shamanic bee cults, to zom-bees, to the ever-present pall of looming honeybee extinction, these insect influencers have been dominating the headlines for decades. Ants are finally getting some well deserved attention with a recent news story.

This is the story of one million cannibal ants found trapped inside a Soviet-era nuclear bunker. It sounds like the start of a B-movie. Perhaps that's why this unlikely tale has proved so popular. But this creature feature has a happy ending.

At an undisclosed location near Międzyrzecz in Western Poland, the now-famous wood ants finally roam free. According to Live Science, these ants from a nearby colony had fallen down a ventilation pipe into a former storage facility for nuclear weapons. This story made headlines even though the ants were sadly neither radioactive nor transformed into atomic giants. In fact, they were pretty unremarkable except for their bad luck. 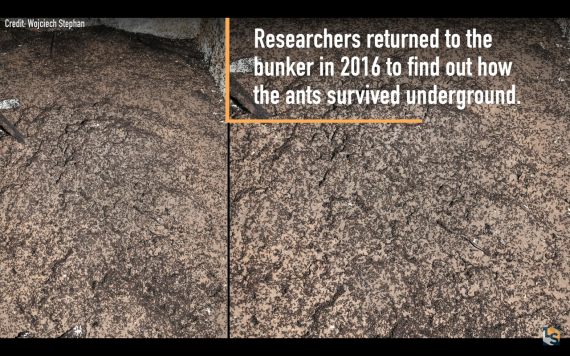 In 2013, the clumsy, ill-fated colony was discovered by scientists, who were actually looking for bats, inhabiting the abandoned bunker once known as Special Object 3003 Templewo. The scientists wondered how so many ants could survive their dismal subterranean fate. In 2016, the scientists returned and got their answer. Gravity had dragged the tiny captives from their cushy home in an ant hill under a nearby tree down into a dark, cold hell. None of the ants could reach the ventilation pipe again, so there was no escape. No longer could they suckle sweet honeydew from the sun-dappled bellies of neighboring aphids. In their shadowy necropolis, the only source of nourishment were the corpses of fellow unfortunates.

Although it's not unusual for wood ants to eat prisoners of war, they usually don't resort to eating members of their own nest. The most significant finding, however, is that this castaway population maintained order even amid the worst possible scenario. Though hopelessly trapped in a monotonous netherworld, the ants still kept themselves busy by maintaining a tidy ant mound and lugging the dead (some 2 million bodies) to neat, little corpse piles in the corners of their prison.

István Maák, a zoologist at the Polish Academy of Sciences in Warsaw, finally took pity on them. He placed a plank of wood between the floor and the ceiling of the ant prison, in effect constructing a bridge, that allows fallen ants to reach the ventilation pipe and climb back to the surface. The inmates were all able to crawl back to the surface by the time Maák returned to check on them in 2017. He documented his rescue mission and recently published its results in the Journal of Hymenoptera Research. The formerly doomed ants have been welcomed back into their colony without incident. Happy days are here again, at least in miniature. 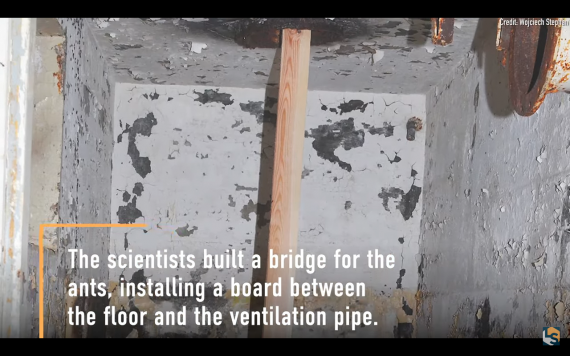 Perhaps because of their collective triumph over adversity, these atomic cannibal ants have garnered a surprising amount of attention from Internet news outlets. Or maybe we all just really needed a feel-good news story.

The unforeseen popularity of this small scale tale is not unwarranted, however. These resilient creatures have earned their rightful props. But let's not forget, there are others of their kind who also deserve an honorable mention. Bees are great, but ants can be zombies too and also vampires. Some ants collect skulls, explode, and can even clone themselves. It's time the weirdos under our feet get some respect around here. Take that bees!