Demons, a Bloody Ritual, and a Teacher in Florida

There was nothing much to warn anyone about anything particularly wrong or dangerous about Danielle Harkins, a 35-year-old literacy teacher at the Lealman and Asian Neighborhood Family Center in St. Petersburg, Florida. She had been teaching reading and writing skills at the center for 5 years without incident and was seen as mostly a gentle and kind teacher who got along great with the kids. She had had some personal problems in recent years, namely a messy divorce and custody battle with her husband, with whom she had two children, a 4-year-old daughter and a 3-year-old son, but for the most part there was nothing bizarre or abnormal about her at all, nothing really in her past to explain the bizarre events looming up over the horizon in her future. Yet things were about to change, and this teacher would find herself at the center of a bizarre case of demons, the occult, and dark, gruesome rituals.

It can probably be said to have all begun in June of 2012, not long after her divorce, when Harkins began to act oddly. Friends and neighbors would claim that the normally calm and nonreligious woman had begun to find religion in an almost fanatical way, and she had also developed somewhat of an interest in demons and angels. One neighbor would later give an odd incident with Harkins in which the teacher had suddenly appeared at her house one day with a strange message, of which she says, “She (Harkins) told me I was okay. She said I didn't have any demons. I don't know where she got the whole demon idea. Who knows what makes people think those things?” It was all very bizarre and out of character for Harkins, and no one seemed to be able to figure out why she was suddenly acting like this or where she had suddenly found religion. Carolyn Chance, the administrator at the Lealman and Asian Neighborhood Family Center would later say of her surprise at this:

She (Harkins) was a very good teacher, very intelligent, she was very skilled. Just recently she started exploring religion, but I didn't know anything about demons or anything like that.

At dusk on the evening of June 9, 2012, Harkins gathered a group of her students at an area near the St. Petersburg Pier and started up a small fire. Considering that this was not their standard routine and no reason had been given for why they had all been called out there, the students were understandably perplexed, wondering what their teacher was up to. However, if any of them thought that this was going to be a fun little campfire night, they were soon proven very wrong when Harkins, who had been quietly watching the students arrive and tending her fire broke her silence to state that all of them had become infested with demons and that they had to be exorcised. This was startling, but not yet truly scary, starting off pretty innocuously, with police spokesman Mike Puetz later saying of the beginning of the ritual, “There was apparently some chanting and then dancing around this fire that was taking place.”

It was not meant to be all chanting and cavorting around the fire, though, as the next stage in Harkin’s demented plan was for the kids to inflict self-mutilations in order to further drive the demons out of their bodies. The students were understandably unwilling to carry this out, so Harkins went about doing it herself. According to reports, she doused one of the teen’s hands with perfume and lit them on fire, causing second degree burns, and this was just the beginning. Another student was slashed across the back with a broken bottle and another cut on the neck, after which the teacher used a heated key to cauterize the wounds, and she convinced several other students to cut themselves and instructed them to all similarly cauterize the wounds to keep the demons from returning.

It must have been a frightening, horrifying experience to have this woman who they had all trusted and learned with for so long suddenly derail to slash and burn them while ranting about demons and possession, all illuminated by the flickering flames of that fire, but amazingly none of the seven teens who were injured said anything about the ritual at first. It would not be until a few days later that one of the students would text a friend about the incident, after which the friend told his parents about it and they brought the police to Harkins, but even after her arrest the victims themselves remained close-lipped about what had really gone on out at that pier, leading to speculation that Harkins may have groomed them on what to say and what not to say about it all. 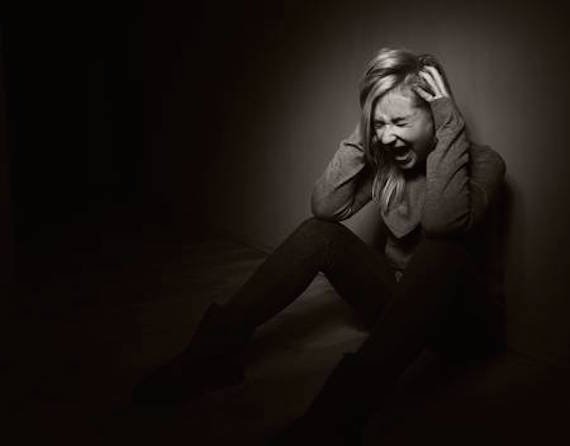 Harkins herself was not much help either, remaining vague about what sort of religion she had gotten involved with and refusing to divulge why she had carried out the ritual or what exactly had happened, with one police spokesperson saying, “Obviously, it's very strange. The motivations for the ritual are very unknown to us. She hasn't informed us exactly what she was trying to accomplish with this.” Due to the fact that that no one was willing to testify as to what had happened, the exact details of what had transpired during the ritual were elusive, it is because of this murky quality to it all that Harkins was only found guilty of just one count of child abuse and one count of aggravated battery, costing her job, netting her a 6-month prison sentence, and putting her on a $55,000 bail, but she seems to have gotten off very lightly all things considered.

Putting a bizarre spin on it all is that after her release from prison Harkins seems to have just vanished off the face of the earth, and no one seems to know where she went, leaving the whole incident and her motives perpetually in a state of speculation and debate. What would drive this otherwise by all accounts rational woman to do this? Was it madness, a psychotic break, depression, or something else? Considering that there has been very little follow up on the case, the witnesses won't talk, and Harkins has seemingly vanished, we will probably never know.