According to a recent study, dinosaurs may have been suffering from mercury poisoning before the deadly asteroid that caused their extinction hit Earth 66 million years ago. While many scientists believe that a huge asteroid called Chicxulub caused the extinction of the dinosaurs, others think that there may have been other factors involved in their demise.

Scientists have been examining ancient fossils found in different parts of the world and they discovered that there was an increase in carbon dioxide and mercury levels across the planet. They believe that the increased levels in mercury and carbon dioxide were caused by several violent volcanic eruptions that took place tens of thousands of years prior to the killer asteroid hitting Earth. In fact, they think that three-quarters of life on Earth had already been killed off by the lava from the violent eruptions.

The different shells that the scientists examined came from Antarctica, Alaska, Alabama, Washington State, California, Argentina, Libya, Sweden, Egypt, and India. Shells retain a lot of valuable information regarding temperature and water quality based on the chemicals found in the water that they held. When mercury enters the water, it reacts with organic matter which is then absorbed in phytoplankton. It is then eaten up by molluscs (like oysters) which end up absorbing the mercury.

And since volcanic eruptions produce a lot of toxic chemicals like mercury, scientists believe that the fossilized shells that they studied indicate that an ancient volcanic event called the “Deccan Traps” eruptions affected the planet for a very long time. It’s been said that the Deccan Traps eruptions lasted for almost a million years and even formed a large part of western India.

Kyle Meyer, who is an environmental scientist and performed the research at the University of Michigan, stated, “For the first time, we can provide insights into the distinct climatic and environmental impacts of Deccan Traps volcanism by analyzing a single material.” 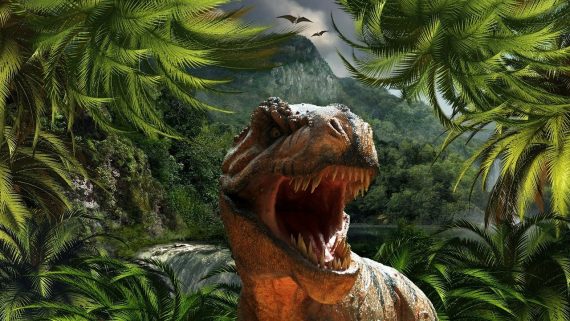 Geochemist Sierra Petersen weighed in by noting, “Mercury anomalies had been documented in sediments but never before in shells,” adding, “Having the ability to reconstruct both climate and a volcanism indicator in the exact same materials helps us circumvent lots of problems related to relative dating.” The results from their study were published in Nature Communications and can be read in full here.

The researchers noticed that the mercury and carbon dioxide levels in the fossilized shells were from different periods in time that included the Late Cretaceous Period, the Pleistocene period, and even to modern times.

So, how did the high levels of mercury affect the dinosaurs? Mercury is an extremely toxic chemical that can have negative effects on bodily organs as well as preventing babies from developing. While scientists don’t know for sure yet if mercury poisoned the dinosaurs before the asteroid hit, this new information is certainly bringing them one step closer to finding out.