All over the world, in cultures spread far and wide, there have always been those otherworldly, ghostly entities that have entrenched themselves into the culture and its lore. In quite a few cases it becomes muddy when trying to discern if this is pure legend or there is something more to the story, perhaps some genuine paranormal phenomenon, and one of these cases brings us to South America. Here there has long been said to roam some sort of malevolent demon, known for its wicked ways and its unsettling whistle, and it has gone on to become very real to many of the people who inhabit its hunting grounds.

The story begins in the 19th century in the rural badlands of Venezuela and Columbia, where scared locals would often tell of encountering a terrifying figure roaming the wilds. Described as being a 7-foot tall or more, unnaturally thin wraith of a figure, the entity wears a tattered white suit, a wide-brimmed hat, and battered, disintegrating shoes, ceaselessly trudging on as a ghostly hound follows after him. It could most often be heard before he was seen, as it constantly unleashed an unearthly whistling noise that had the power to terrify, control minds, and foretell death. Indeed, it was this whistle that would lead to the entity’s name, El Silbón, meaning "The Whistler," and the stories of hapless and very scared people running across him propelled this name into myth and legend.

The tale of how El Silbón came to be varies with the telling. The most popular story is that the wraith was once a person who murdered his own father in cold blood after he found him sexually assaulting his mother, with some versions saying that the father actually killed her after accusing her of being unfaithful. In other variations the father had raped or killed his son’s wife, but it always ends with the death of the mother or wife. The murder of the father was apparently a brutal affair, with the son disemboweling him and letting him die a slow death, after which he was captured by the locals and punished by being tied to a post to be lashed to a pulp, his wounds rubbed with chili peppers, and then released to be chased by starved, rabid hounds into the forbidding wilderness, his own grandfather cursing him to wander for all of eternity carrying the bones of his dead father. 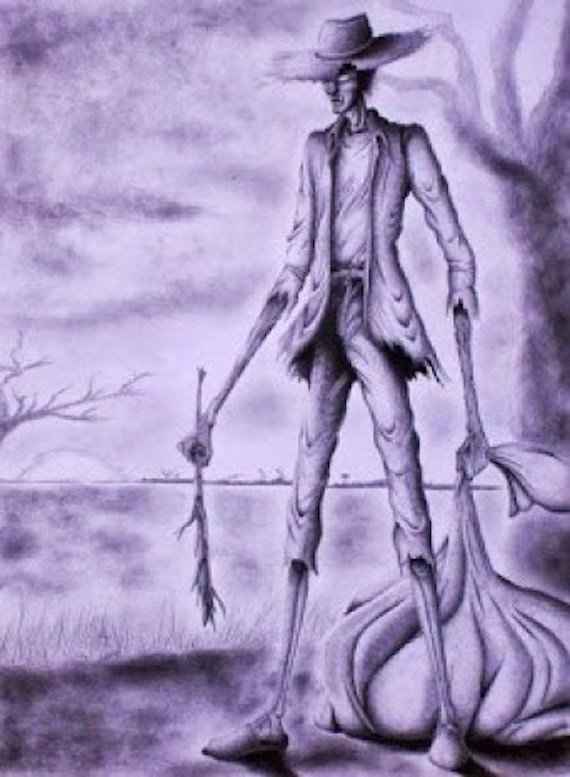 Another version of the tale has it that El Silbón was once a spoiled young man who demanded to eat venison one day, and so his father went out deer hunting to get it for him. He must have really wanted to eat that deer, because when his father returned empty handed it is said the son killed him in a rage and cut out his heart and liver, having his mother cook them for dinner unbeknownst to her that they were from her husband rather than a deer. When she finds out, she tells the grandfather, and it ends as it did in the previous version, with the son whipped and let loose with a rabid dog hot on his heels.

The end of the story is always the same, with the son whipped, cursed, and doomed to wander the wilds for all eternity with that dog perpetually chasing him, and the entity is always described as being that towering, skeletal figure with a sack over is shoulder and emanating that eerie whistle. This whistle is oddly very detailed in the way it supposedly sounds throughout the lore. It apparently always resembles the musical notes C, D, E, F, G, A, B, rising in tone to F, then lowering to B, and it is said to sound far away when the creature is near, and close at hand when it is far away, the better to disorient its victims. To hear the whistle is believed to mean certain death is at hand, and the lore is that the only way to ward off the coming doom is to use chili peppers, brandish a whip, or use the sound of a barking dog, all things which El Silbón is supposedly terrified of. 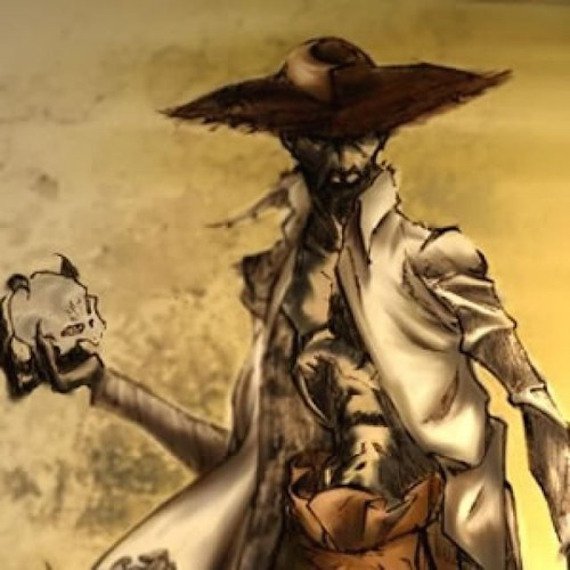 The creature is said to prowl about roads, woods, and meadows, always coming in the rainiest times, sometimes crouched in the treetops, looking specifically for drunks and womanizers, who it will ruthlessly attack and collect the bones from, stuffing them into the macabre collection of other such souvenirs in his sack. It can use its whistle to lull people into a stupor, or conversely send them running in terror, and mostly it is said that that whistle is something you do not want to hear. It is also said that El Silbón will enter houses to count how many bones he has, and if you are to hear the clattering of these bones upon the floor then someone in the family is about to die.

While this sounds like it must all surely be myth and a boogieman story to keep people in line, there are those who claim that this spirit is very real, and there are occasional real sighting accounts of the specter. One notable witness was the Venezuelan writer and poet Dámaso Delgado, who claimed to have encountered the beast in 1966 and that he had only managed to escape due to a barking dog with him at the time, which sent the demon running in fright. It is all very bizarre, and such real reports blur the lines between what is real and what is pure legend. Is there a chance that the malicious whistling entity known as El Silbón is real in any sense, or is this all just pure legend and lore? Whatever it is, the story of El Silbón is certainly a creepy addition to the many cases of bizarre Boggiemen said to wander the earth, and a pretty wild tale all the same.

Turns Out That Impossible Black Hole is Still Impossible