The United Kingdom may have a lock on haunted pubs, but haunted palaces are found in most countries with royalty, and the United Arab Emirates just joined the club. Actually, it’s been in the haunted palace club for a while, but the spirit-filled modernistic Al Qasimi Palace (a.k.a. Al Qasr Al Gamedh) in Ras Al Khaimah is now open to the public for ghost-hunting. Why did the family of the late Sheikh Abdulaziz bin Humaid Al Qasimi move out after one night?

“One of the most frightening yet mesmerising structures is the Al Qassimi Palace in RAK which reportedly cost AED 500 million to build, over 25 years ago. Locals say the structure has remained uninhabited save just one night. And that the people were driven out in just one night after they experienced strange paranormal happenings.”

Sheikh Saqr bin Moḥammed Al Qasimi ruled Ras Al Khaimah from 1948 to 2010. In 1985 he spent 500 million United Arab Emirates Dirham ($136,121,100 US) on the beautiful Al Qasimi Palace. Built on a high plateau with a panoramic view of the emirate, it’s four floors contain 35 rooms with walls covered with beautiful Arabesque paintings, glass chandeliers, statues, an indoor pyramid and furnishings befitting of an Arab royal family. (Many photos of the palace can be seen here.) However, this royal family found something (or things) that scared them so severely, they moved out after the first night there. What kind of ghosts, demons or djinns did they see in the palace? 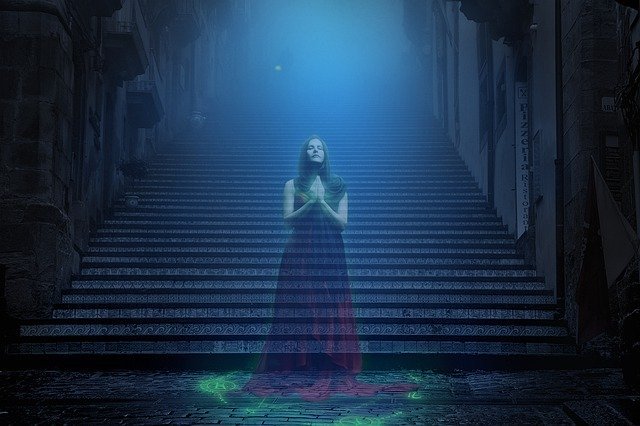 “Word of Mouth also has it that people have reported irrational fear, sounds of wailing persons, bizarre sightings and also spotted children peeping out of the partly broken stained glass windows while crying out for help to trespassers!”

Strangely, there doesn’t appear to be a record of what drove the royals out of the haunted palace. Although it’s been empty ever since, some people, including a few paranormal investigators, have stayed there and reported eerie sensations and sounds and the eyes of the paintings seeming to follow them. No kids in the windows though. The Sheikh doesn’t appear to have had a reputation for the kinds of horrific acts against his people or his enemies that would warrant ghosts haunting his house. There may be some clues nearby -- Al Jazirah Al Hamra is known as the Haunted Village because of its deserted buildings and is only 20 minutes away.

If you’re interested in ghost hunting the palace yourself, it’s in the news this week because it has been opened to the public for the first time. There are tours of the rooms where visitors can see both the opulence of its design and the damages done by vandals breaking in. No photos allowed. Ticket are AED 75 ($20 US) per single person or AED 50 ($13.50 US) per person in groups. Hours are 9:00 am to 7:00 pm weekdays. Get there before April 2020 when the palace will be closed for “large development work” as it and the surrounding area will be turned into a ‘horror adventures’ attraction with restaurants, cafes and hotel rooms.

Perhaps the ghosts showed the royals the future image of their house as a ‘horror adventure’ park and THAT’S what scared them away.

The “Russian Roswell UFO” Story: From Where Did It Come?