For some reason, the Flat Earth theory appears to be getting an exorbitant amount of media attention lately, while the more interesting and conspiracy-worthy Hollow Earth theory sits on the sidelines waiting for an opportunity to get into the game. That opportunity seems to have arrived with a Google Map update of an area on King George Island on the continent of Antarctica where it looks like a large hole opened up between 2005 and 2019 … a hole with a trail leading to the ocean as if something or someone had entered or left. Is this proof of the Hollow Earth or just a good reason to get it some media time?

“It is large enough for spacecraft and flying saucers or even the assets of our armed forces to fly into this massive opening. Is this a base? There is no indication that it is a sink.”

The photos were posted on YouTube this week by Thirdphaseofmoon, a YouTube channel known for interesting videos and plenty of conspiracy theories. The video (watch it here) shows Google Map images from three time periods – 2005, 2007 and 2019 – with the hole progressing from not there to wide open to gone again to there but snow-covered. A 2007 photo shows something in the waters offshore. Thirdphaseofmoon estimates 83 meters high and 75 meters wide. As befitting of a conspiracy site, they speculate it’s possibly a cave large enough for "hundreds, if not thousands of people" or an underground base “large enough for spacecraft and flying saucers or even the assets of our armed forces to fly into this massive opening.” As usual, other sites and commenters have views ranging from agreement to a naturally-formed ice-melt hole to a submarine base to an entry-point for entering the Hollow Earth.

For as long as humans have entered caves, they’ve told stories of what might be found as one walked or crawled deep down into their darkest realms. The beliefs that they contained other humans, humanoids or monsters eventually merged with religious beliefs in an underworld afterlife for all of the dead or a hell just for those who don’t head in the opposite direction to a heaven. The myths became scientific in 1692 when astronomer Edmund Halley proposed that the Earth was made of concentric shells separated by atmospheres which occasionally leaked to cause the Aurora Borealis. Halley also speculated that the layers were inhabited. As the ‘life in a Hollow Earth’ theories took hold, other scientists claimed there was a sun at the center which warmed the beings living inside. One interesting tale suggests the Creek Native American tribe came to the surface via caves connected to the Hollow Earth.

The scientific ideas of a Hollow Earth were supplemented by theories of ancient civilizations and non-human superior creatures in the writings of Jules Verne, H.P. Lovecraft and Edgar Rice Burroughs. The link to the North and South Poles comes from military officer John Cleves Symmes Jr., who in 1818 declared that the main openings to the Hollow Earth were at the poles. The discovery that the North Pole is on a layer of ice which has now melted kills the idea of a hole being there, but the idea of an entrance is Antarctica persisted and gained real traction during and after World War II, with rumors of underground Nazi bases for planes and experimental flying saucers and a secret hideout for Hitler. However, the spawner of the best conspiracy theories was Admiral Richard Byrd, who claimed to be the first person to fly over the North and South poles and allegedly wrote in a secret 1947 journal of flying into one of the holes Symmes proposed and meeting members of an underground race. 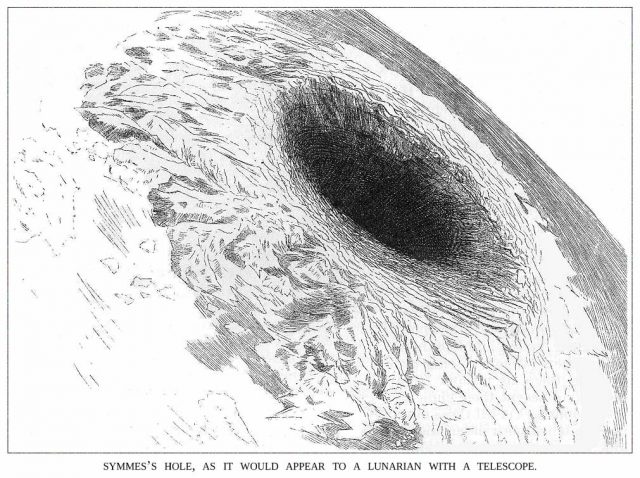 Why hasn’t anyone found definitive proof of a hole to the Hollow Earth at the South Pole? This is where the Hollow Earthers meet the Flat Earthers. Many in both groups believe the governments of the world are hiding the evidence to both protect our fragile psyches from the truth and to protect alleged riches said to be found there.

Which brings us back to the latest Google Map images and the hole on King George Island. That’s a long way from the South Pole. Why would governments trying to hide something allow Google mapping of Antarctica ... unless it's an act of misdirection? If they're real, the images are not sufficient to determine without a doubt that the hole and the trail to the water are or aren’t the result of melting ice and runoff. That leaves the hole wide open both literally and figuratively to Hollow Earth theories.