In 2016, two videos surfaced in Australia that were purported to be images of living Tasmanian tigers – the legendary thylacine believed by most experts to have gone extinct in 1936. Both videos were released by one Neil Waters, the founder and head of the Thylacine Awareness Group of Australia (TAGOA). One video, originally recorded in 2008 in South West Victoria, convinced Waters that “We believe this a thylacine.” At the time, Waters hoped that releasing these videos to the general public would help find the creatures – assuming they’re still alive and in the wild. That hasn’t happened, so Waters has taken matters into his own hands.

“This is a long-term project and I am prepared to give it a couple of years – or until my finances run out. My dream is to prove the thylacine is alive and well and have a management plan put in place to ensure their continued survival.” 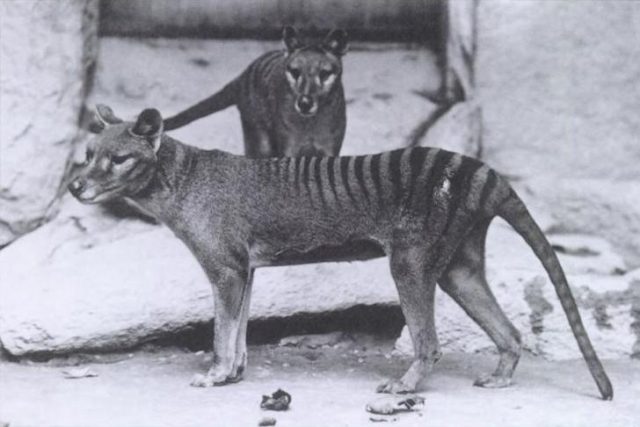 In 2010, Waters purchased land in northeastern Tasmania. Since then, he claims to have seen at least two thylacines on the property and believes some of the 100 breeding pairs rumored to exist in the wild are out there somewhere. However, sitting on the porch waiting for them to come out of the bush isn’t working, so Waters is preparing to camp in the bush with night vision equipment and recording devices to capture them.

“Neil is now embarking on a 2 year investigation in the field in NE Tasmania to try and get that irrefutable shot of a Tiger in the wild or fresh DNA evidence.”

According to the Thylacine Awareness Group website, Waters will spend two years stalking the animals in the bush – more if his money holds up, less if he finds one. Should he record thylacines, he plans to convince skeptics by storing the images on SD cards coded to specific cameras. While he doesn’t say how he plans to collect and analyze samples containing DNA, Waters knows that the 7300 members of TAGOA hold him to the highest standards of integrity. They are also helping raise money for thylacine research, although it appears Waters is funding his bush hunt himself.

“There have been hundreds of Tasmanian Tiger/ Thylacine sightings in Western Australia, South Australia, Victoria, Queensland, New South Wales and even Northern Territory as recent as 2018.”

With that kind of potential to see a thylacine in Australia, why did Neil Waters buy land in Tasmania for his hunt? Is this a hint that he knows something he’s not yet ready to reveal?

While he keeps an eye out for Tasmanian tigers, we’ll keep an eye on him.

Meteoroid Kissed the Earth, Then Flew Back Into Space