Stonehenge gets all of the publicity and love, but there are plenty of other stone circles in the UK deserving of at least 15 minutes of fame. Here’s yours, Tursachan Calanais. A project to recreate 3D virtual images of hidden stone circles using satellite imagery was scanning the peat-covered area around Tursachan Calanais when it found evidence of a lost stone circle built around what appears to be the scar of a massive lightning strike. Was this strike so large and frightening that it inspired Bronze Age people to build this stone monument?

“However, this remarkable evidence suggests that the forces of nature could have been intimately linked with everyday life and beliefs of the early farming communities on the island.” 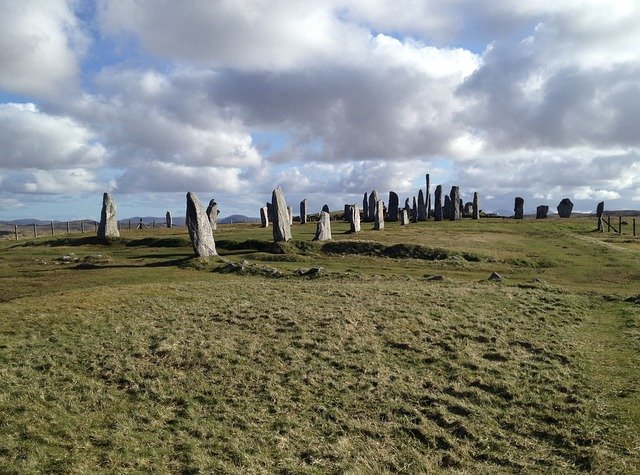 Tursachan Chalanais, more popularly known as the Callanish Stones, are a late Neolithic Era monolith of standing stones in a cross arrangement with a central stone circle. Found on the west coast of the island of Lewis near Callanish in the Outer Hebrides, they date back to between 2900 and 2600 BCE and were the center of a thriving community. Site XI, or Airigh na Beinne Bige, contains a single standing stone on an exposed hillside overlooking the Callanish Stones and Bates rightly suspected where there’s one stone, there’s probably more. What he didn’t expect to find was the star-shaped magnetic anomaly from one giant lightning strike or many smaller ones in the middle of the circle.

“The dramatic results of survey on Lewis demonstrate that we have to understand the landscapes that surrounds these ritual monuments and the role that nature and natural events, including lightning, played in creating the rituals and beliefs of people many thousands of years ago.”

Co-author Professor Vincent Gaffney of the School Archaeological Sciences at the University of Bradford highlights the significance of this discovery … and the mystery.

“Such clear evidence for lightning strikes is extremely rare in the UK and the association with this stone circle is unlikely to be coincidental. Whether the lightning at Site XI focused on a tree or rock which is no longer there, or the monument itself attracted strikes, is uncertain.”

“Or the monument itself attracted strikes.” Yikes!