One of the many places known for elongated skulls is Egypt. While few ancient remains or mummies have been discovered sporting the long craniums, many paintings and sculptures depict them. In many other paintings, the Egyptians aren’t shown with cone heads but more than a few have mysterious head cones. Now, a new study reports that a few of these head cones have actually been found --- and they may solve the mystery surrounding their appearances in ancient Egyptian art.

“Images of ancient Egyptians wearing distinctive, cone-shaped objects on their heads have, in the absence of physical examples, long elicited scholarly debate. Did people wear these cones, or were they a purely iconographic device? What was their function and meaning? Recent excavations at the Amarna cemeteries now provide the first material examples of head cones.”

In the study published in the journal Antiquity, a team of archeologists describe finding two of these mysterious head cones in graves in Akhetaten (also called Amarna), an unusual ancient Egyptian city that was only occupied for about 15 years during the 14th century B.C.E. while Egypt was ruled by its namesake -- Akhenaten. He was later considered to be a heretic for creating a religious system based on a single god, Aten, and may have also been the father of Tutankhamun. What does any of this have to do with the mysterious head cones? 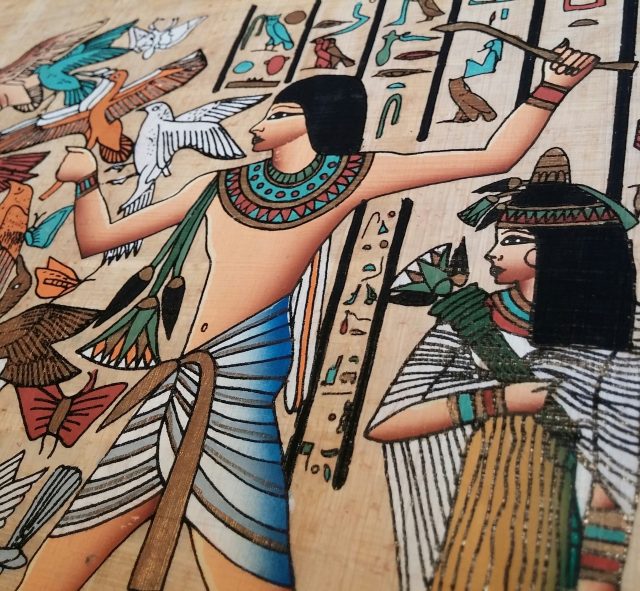 “Between 1550 B.C. and 30 B.C., Egyptian art depicted people wearing what look like cones on their heads. Because no examples of these cones had ever been found, archaeologists wondered whether they actually existed or were an artistic motif that had no basis in reality (similar to people with halos over their heads depicted in Christian art).”

LiveScience draws a comparison between the Christian halo and the head cone, giving it a religious connotation. The difference is, we now have two real people with real head cones found in graves in Akhetaten. (Photographs here.) One, a woman no more than 29 when she died, had "long, thick braids featuring many extensions and end-curls" and "the cone was found in situ, placed on top of the head over the well-preserved hair." The other, according to the archeologists, was an individual of undetermined sex, age 15-to-20, whose cone “seems to be that of a low dome" and measured 3.1 inches (80 mm) high and 3.9 inches (100 mm) across.

Besides their actual existence, what the researchers found most unusual about these two head cones was that they were made of beeswax – not a perfumed oil solid or fat that was intended to melt in the grave to cleanse the spirit. Oh, and the cones were solid lumps of wax, not hollow hats. The beeswax, combined with the physical condition of the individuals, indicates they were of a worker class – a surprise to archeologists who believed they signified membership in a higher class. So, what was their true purpose?

“The authors tentatively suggest that the Amarna cones were symbols meant to enhance the rebirth or personal fertility of the deceased in the afterlife.”

Now that they finally have a couple of head cones to deconstruct, the researchers speculate the cream-colored beeswax bonnets were fertility aids placed on their heads in death to resolve these issues in the afterlife. Support for this theory comes from the fact that "Scholars often link the cones specifically with sensuality, sexuality and related notions, as they are frequently associated in imagery with women, sometimes unclothed" and are painted on women in scenes with the fertility goddess Hathor.

Case closed? Not so fast, say other researchers interviewed by LiveScience. Lise Manniche, a professor emeritus of Egyptology at the University of Copenhagen, thinks they were just cheaper, lower-class versions of the perfumed unguent head cones of the upper class. Nicola Harrington, an honorary research associate at the University of Sydney's archaeology department, points out that the two individuals had “stress/compression fractures of the mid-lower spine” which were common among dancers, indicating that the two may have been ritual hoofers who performed for the king and his god Aten.

Which brings us back to the brief life of Akhetaten and the controversy surrounding Akhenaten and his attempt at monotheism in ancient Egypt. Was this so abhorring that these people were forced to abandon Akhenaten, which means "Horizon of the Aten," in shame?

Our head cones are tipped to the archeologists who continue to search for their true meaning.

Area 51: My Thoughts and Observations