The Hubble Space Telescope gets all of the media hype for its dazzling images, but when it comes to black holes – which don’t photograph too well – you can’t beat the Chandra X-Ray Observatory. In orbit since 1999, this space telescope has far exceeded its planned five-year lifespan and continues to dazzle astronomers with its new discoveries about black holes. Its latest find is a supermassive black hole which, instead of gobbling up stars, planets and space debris, is spewing out thousands of baby stars and spreading them across four galaxies. How does this happen and are we in any danger of being hit?

"This is the first time we've seen a single black hole boost star birth in more than one galaxy at a time. It's amazing to think one galaxy's black hole can have a say in what happens in other galaxies millions of trillions of miles away."

Roberto Gilli of the National Institute of Astrophysics (INAF) in Bologna, Italy, describes the discovery in a press release announcing the publication of the results in the journal "Astronomy and Astrophysics." The supermassive black hole was found by following a jet of high-energy particles about one million light years in length to a galaxy 9.9 billion light years from Earth, which is surrounded by seven other nearby galaxies. The black hole end of the jet showed an x-ray cloud or bubble of hot gas. That appears to be the birth canal of the stars.

“As the hot bubble expanded and swept through four neighboring galaxies, it could have created a shock wave that compressed cool gas in the galaxies, causing stars to form. All four galaxies are approximately the same distance, about 400,000 light years, from the center of the bubble. The authors estimate that the star formation rate is between about two to five times higher than typical galaxies with similar masses and distance from Earth.”

The study refers to this process as “positive feedback” – a black hole creating stars rather than stopping their production or consuming them, which would obviously be “negative feedback.” The attitude of the feedback is determined by a “delicate balance between the heating rate and cooling rate of a cloud” in a nearby galaxy. When clouds in nearby galaxies are hit by the shock of the hot bubble spit out by the supermassive black hole, cooler ones are found to form more stars. 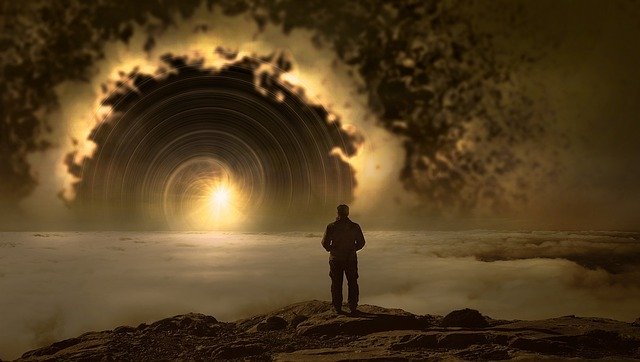 Does this sound to you like these astronomers are giving human characteristics to supermassive black holes? You’re not alone.

"Black holes have a well-earned reputation for being powerful and deadly, but not always. This is a prime example that they sometimes defy that stereotype and can be nurturing instead."

Co-author Alessandro Peca and the rest of the astronomers are looking forward to using this new discovery to find more black holes that are “positive” and “nurturing” parents of stars across multiple galaxies and huge distances.