In an interview with Mike and Maurice’s Mind Escape podcast earlier this year, Adams recalled the experience by stating, “I look up and it’s like a giant trash bag floating over the base.” He described the craft by explaining, “If you could imagine a trash bag that’s two miles in diameter floating, translucent.” He even went so far as to say that it looked like a “sky jellyfish”.

He explained that parts of the “trash bag” craft were missing but other parts he could see clearly. “It was shimmering in the sky, two miles in diameter,” he noted. When asked if it was possible that the mysterious craft could have been a cloud or perhaps even gas, he said that it had “defined attributes”. 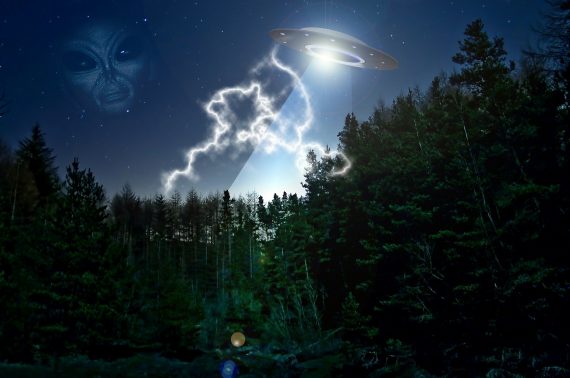 To add to the strangeness of the event, the pilots witnessed another mysterious object flying over the military base shortly before the “trash bag” craft appeared.

Although it was definitely strange and unexplained, the veteran wasn’t so quick to rule it extraterrestrial. “I think that the government knows about it – why would it be right next to a military base?” Adams asked, adding, “The military would know – there’s something there, it landed outside the base behind the trees.”

Adams served in the U.S. Navy for 14 years and was even on the USS Nimitz between 2012 and 2015 as a supply officer. The USS Nimitz became well-known in 2017 when videos showed pilots from the ship chasing a tic-tac shaped UFO off the coast of California in 2004. Since Adams was on board the carrier eight years after the encounter, he didn’t witness it, although his experience in Virginia was probably just as fascinating.

There was obviously something strange in the sky above the Virginia Beach military base that has yet to be explained and there were several witnesses who can back up the claims of the encounter. “You can’t disprove it, credible people have seen that,” Adams noted.