Piasa Not a Bird, but Still a Monster

Although I've found many of the current Mothman reports to be dubious, I don't doubt that sometimes credible witnesses really do see strange things in the sky. Long-standing Thunderbird legends from native communities in the U.S. combined with recurring modern sightings, including flaps with multiple witnesses in 1948 and 1977 across the Midwest, have me convinced that winged weirdies of some variety do exist.

Now, for one of these giants of the air, additional information has become available, which sheds more light on the mystery. The identity of Illinois's fabled flying freak known as the ‘Piasa Bird’ is now clear. Greater cultural understanding and current archeological findings finally pinpoint its origin in the water not the sky. But don’t fret, the original artwork still represents a really weird monster with deep supernatural ties and cryptozoological significance.

The city of Alton in Southern Illinois (just across the Mississippi River from St. Louis) is famous for the so-called Piasa Bird, the largest example of Native American rock art in the U.S. The only problem is, it’s not the original. The original pictograph no longer exists, although many reproductions have been painted in various locations on the bluffs around Alton over the last almost 150 years, the first created in 1887. Just how long the original has been gone and what it exactly looked like is still disputed. What we do know is Father Jacques Marquette was the first to record its existence in writing in 1673. 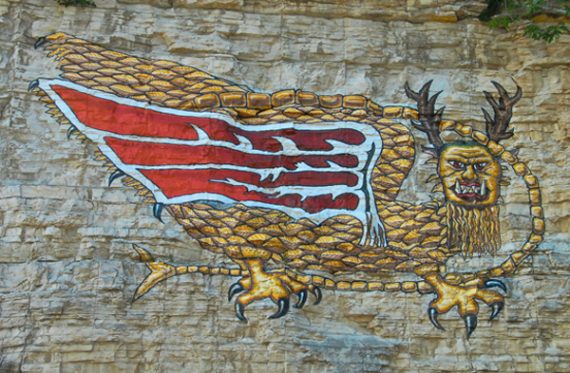 On their voyage of discovery down the Mississippi River, Marquette and fellow explorer Louis Jolliet saw the following near present-day Illinois:

"While Skirting some rocks, which by Their height and length inspired awe, We saw upon one of them two painted monsters which at first made Us afraid, and upon Which the boldest savages dare not Long rest their eyes. They are as large As a calf; they have Horns on their heads Like those of a deer, a horrible look, red eyes, a beard Like a tiger's, a face somewhat like a man's, a body Covered with scales, and so Long A tail that it winds all around the Body, passing above the head and going back between the legs, ending in a Fish's tail. Green, red, and black are the three Colors composing the Picture. Moreover, these 2 monsters are so well painted that we cannot believe that any savage is their author; for good painters in France would find it difficult to paint so well, -- and besides they are so high up on the rock that it is difficult to reach that place Conveniently to paint them. Here is approximately The shape of these monsters, As we have faithfully Copied It."

You might notice that this entry in Marquette’s journal refers to two creatures painted upon the rocks, and, most importantly, omits one very important feature of flying monsters -- wings! You’ll also notice that the account mentions that Marquette made a sketch. Unfortunately, this sketch has since been lost.

Another explorer of the Mississippi Valley Father Antoine Hennepin recorded in 1680 that an Illini tribe warned him of dangerous waters ahead by pointing to “Tritons and other Sea Monsters painted” on a rock. Both Hennepin and another French missionary Anastase Donay documented the practice of native sacrifices of tobacco under the watchful eyes of the pictographs. According to their native informants, they offered tobacco to a resident spirit at the spot where a fleeing war party once drowned. Other versions of the story describe the man-eating water monster thought to be responsible for such tragedies more clearly. According to these early missionary accounts, the location of the rock art known today as the ‘Piasa Bird’ was most likely a warning meant for travellers of the dangerous confluence of the Mississippi and Missouri Rivers, which awaited just a few miles ahead of their canoes. 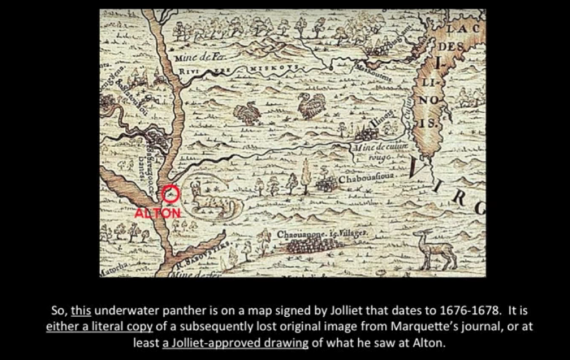 So why is this enigmatic creature depicted on rock art with horns, scales, and a fish’s tale so often confused with a bird? This confusion most likely began with one, Professor John Russell, who declared in 1836 to have uncovered the local native legend of the fearsome Piasa. The word Piasa he claimed means “the bird that devours men.”

Spoiler Alert: the alleged native legend tells of a giant predatory bird, finally slain with poison arrows from ambushing warriors and a noble chief who offers himself as bait. The story caught on and everyone just took John Russell’s word for it. And what of the non-existent wings on the original rock art? One writer claimed the wings on the pictograph were only visible when wet.

Case closed? Hardly. While some speculated further based on Russell’s tall tale and added wings to the many reiterations of the so-called ‘Piasa’ painting, other researchers dug into the archives seeking mislaid clues. 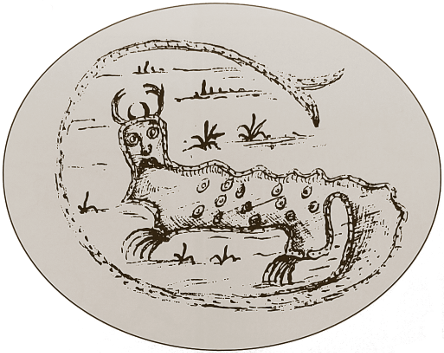 In 1992, French archeologist Lucien Campeau finally found a reproduction of Marquette’s long-lost sketch on a map of the Mississippi Valley produced in 1678 from the deceased Marquette’s notes. The Franquelin Map as it is sometimes known was drawn by Jean-Baptiste Franquelin, but credited to and signed by Marquette’s companion, Jolliet. The creature depicted on the map at the site of present-day Alton, Illinois has the horns/antlers and the long fish’s tail as described, but no wings.

Archeologists immediately recognized the horns and tail as characteristic of, not the typically benevolent Thunderbird, but a powerful, man-eating aquatic monster evident in the cosmology of Midwestern tribes. The Underwater Panther, or Mishipeshu (Ojibwe), was also known to the tribes of the Illini Confederacy, who call it Araamipinsia. The mystical cat hunts in the water just like a jaguar. The Underwater Panther is sometimes depicted with scales and sometimes the more realistic spots of a jaguar or both. This may suggest early, extended incursions of actual jaguars deep into North America beyond their typical range, which today is thought to end in Arizona. 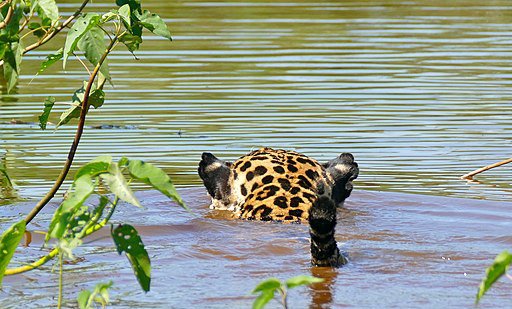 Linguistically, experts in the local Illini/Miami language reveal that the word Piasa actually has nothing to do with Thunderbirds or Underwater Panthers, which complicates matters. Piasa comes from Payiihsa which actually refers to supernatural dwarves. In Ojibwe, these diminutive beings are known by the similar name Paayiinsag.

In 2015, linguist David Costa, the program director of the Language Research Office at the Myaamia Center at Miami University, published his translation of an authentic Illini story originally recorded in 1895. This tale told by Peoria storyteller George Finley, also known by the name “The Path of the Storm,” seems to tie all these disparate elements into a nice, neat bow. It may also be the authentic origin of the so-called ‘Piasa’ legend.

Spoiler Alert: The tale tells of Wiihsakacaakwa, the trickster hero of the Illini, who is captured by the Underwater Panther. He is locked up with a bunch of other victims who the monster consumes at his leisure. After devouring one of the hapless captives, the beast falls asleep. Things look bleak for Wiihsakacaakwa, but then he manages to stuff the sleeping creature with gunpowder and blow it up. After which, the monster’s cool underwater lair becomes Wiihsakacaakwa’s swinging bachelor pad . . . that is until two spooky, supernatural dwarves raid his new digs and unceremoniously kick him to the curb.

This story fits better within the cosmology of Midwestern native peoples and is more likely to be authentic. Surprisingly, the Thunderbird, the cosmic nemesis of the Underwater Panther, is nowhere to be seen. In the stories of other Midwestern natives, it is often the Thunderbird who infiltrates the dreaded underwater lair to free missing swimmers. Thunderbird petroglyphs are present in the area surrounding where the ‘Piasa’ pictograph was once located. However, the so-called ‘Piasa’ is not a Thunderbird, but its traditional opposite, Mishipeshu, the Underwater Panther. The ‘Piasa’ is not a terror from the skies, but rather what lies beneath, a horror that devours the unsuspecting from below.

For a more detailed analysis of the 'Piasa' problem, see this 2013 presentation by Duane Esarey, Director of Illinois’s Dickson Mounds Museum.

Allison Jornlin
Allison Jornlin is a researcher, writer, and speaker who has investigated Forteana in the Midwest for more than 20 years. Poltergeists, fae folk, and paranthropology are her favorite topics. She helps plan Hawaii ParaCon, Hawaii’s annual paranormal conference. You can follow Allison on Twitter and Facebook.

Flying Saucers: When the FBI Visits Your Wife