In bad times, farmers have been known to lose their heads over what to do when their crops won’t grow. Smart farmers in these situations learn to use their heads, not lose them. On Easter Island (Rapa Nui), a place known for its heads, it turns out farmers did both. New research has discovered that by creating and then removing those giant stone heads from a single quarry, the area around it became lush farmland. Will we soon be seeing giant heads coming out of Nebraska?

"Our excavation broadens our perspective of the Moai and encourages us to realise that nothing, no matter how obvious, is ever exactly as it seems. I think our new analysis humanises the production process of the Moai." 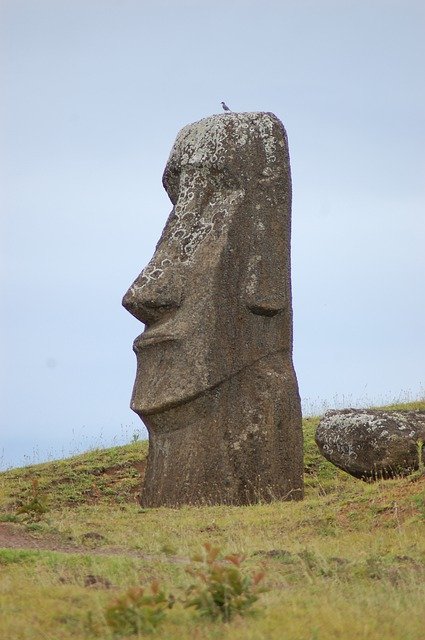 In a paper published recently in the Journal of Archaeological Science, UCLA researcher Jo Anne Van Tilburg, director of the Easter Island Statue Project on Rapa Nui, described the surprising discovery during a five-year project focusing on just two of the more than 1,000 moai or statues on the island. These two, labeled Moai 156 and 157, are located in Rano Raraku, the volcanic crater where over 90 percent of the statues were quarried. Moai 156 and 157 are unique in two ways – they were placed upright with one on a pedestal and the other sunken into the ground, meaning they were not to be moved; and they were covered with engraved petroglyph motifs, indicating that they had a special purpose for being there. What purpose might that be?

“When we got the chemistry results back, I did a double take.”

Researcher and study co-author Sarah Sherwood of Tennessee’s University of the South, was referring to the soil analysis done on samples taken at the foot of each statue, which were erected between 1510 CE and 1645 CE. Those samples contained evidence of taro (a root vegetable), bananas and sweet potatoes. Further study of the soil in Rano Raraku found it to be a lot more fertile than the barren dirt on the rest of the island, containing calcium, phosphorus and moisture. That means Rano Raraku was much more than just a quarry for stone statues to be moved around the island and baffle visitors to this day.

“That is, these and probably other upright Moai in Rano Raraku were retained in place to ensure the sacred nature of the quarry itself. The Moai were central to the idea of fertility, and in Rapanui belief their presence here stimulated agricultural food production.”

So, which came first – the fertile soil or the belief that the statues helped make it and keep it that way?

“Everywhere else on the island the soil was being quickly worn out, eroding, being leeched of elements that feed plants, but in the quarry, with its constant new influx of small fragments of the bedrock generated by the quarrying process, there is a perfect feedback system of water, natural fertiliser and nutrients.”

It sounds like the act of carving out the stone statues contributed to the natural system that made Rano Raraku the Nebraska of Easter Island. Perhaps the foods helped the islanders grow bigger and stronger like the farm boys of Nebraska and gave them the strength to move the giant statues around the island – a process that’s still a mystery.

All the corn does in Nebraska is turn those farm boys into linemen for the University of Nebraska Cornhuskers.

Building Blocks of Life Shown to Exist as a Quantum Wave