There are few things more annoying than walking across a rug in stocking feet, reaching for a doorknob and getting a sudden shock. There are few things more frustratingly costly than making that same cross-rug trip, reaching for the knob on an electronic device and watching the spark arc across and fry a circuit board. Now, imagine that same situation (sans stocking feet) on the Moon. It turns out that shuffling across the lunar surface can generate similar sparks that could fry components which are far more costly and potentially life-threatening. Will static electricity stop space travel? Did Captain Kirk have this problem?

“Lacking a global magnetic field and an atmosphere, the lunar surface is electrically charged by the impingement of the space plasma and the emission of photoelectrons. Charging was not considered a serious risk during the Apollo mission because astronauts always stayed under sunlit where there is no significant charging due to photoelectron emission. However, future lunar missions will explore the lunar terminator and far-side where high voltage charging (hundreds to thousands volts negative) can occur. This raises concerns on possible charging/arcing risks for astronauts on lunar surface.”

Hundreds to thousands of volts! That shocking news was presented at the recent Fall Meeting of the American Geophysical Union by Joseph Wang, a plasma physicist at the University of Southern California. The cause of the spark is slightly different on the Moon, making the jolt much bigger. While Earth is protected from solar wind by its magnetic field, the Moon has none, so it’s bombarded constantly by negatively charged electrons and positively charged ions. As a result, the dusty lunar surface is electrically alive. When that dust sticks to a spacesuit, a connection can be made to the surface and a charge can flow between them. Unlike woolen socks, spacesuits are filled with electronic gear for life support and exploration. One fried circuit board and … let’s just say Houston gets notified of another problem.

Wait a minute, you say. There were no reports of the Apollo astronauts getting shocked on their moonwalks or driving their buggies. In a Gizmodo article, Wang explains that the Apollo astronauts walked on the sunny side of the Moon and photons from sunlight hitting the charged particles on the surface balances the charges and reduces or eliminates the shock. Unfortunately for future astronauts, NASA, like the Chinese space program, is more interested in the darker side of the moon for future missions – where there’s ice for water. What happens when the astronauts step into the shadows? And what if they then jump onto a more sophisticated machine than the moon buggies – like a lunar bulldozer? Will we see the spark from Earth? 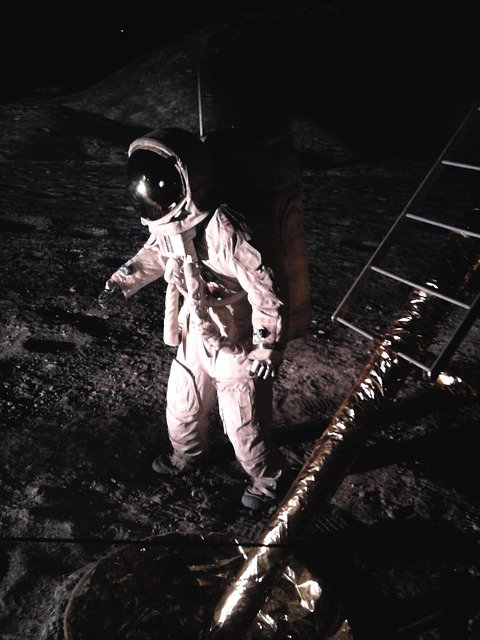 “Laboratory experiments were carried out to measure charging and arcing on spacesuit material Gore-Tex covered by lunar dust simulant JSC-1A. The USC-IFEPIC (immersed-finite-element particle-in-cell) code coupled with a Direct Simulation Monte Carlo module is applied to simulate both astronaut charging and arcing onset on spacesuit. Results show that the spacesuit surface potential is dependent on both the ambient plasma condition and the dust coverage.”

Wang’s tests found that the dirtier the spacesuit, the higher the chances for big sparks. The 12 astronauts who walked on the Moon came back with filthy suits after only a few days outside their module. What will happen when the duration is longer?

Will the most important piece of equipment on the Moon be a vacuum cleaner?

Strange Creatures and Their Even Stranger Eyes