Next to the Holy Grail, the most coveted biblical lost treasure is the Ark of the Covenant. The search for the Ark has taken archeologists to many locations where the alleged gold-covered wooden box which was said to have held the original Ten Commandments tablets and the mystical powers bestowed upon them was rumored to have been on display, stored or hidden. Those places, usually an ancient temple, had legends or unique characteristics which led searchers to them. Recently, another location was added to the list, and its Ark-linked characteristics are its unique shape and a huge stone slab which biblical archeologists now suspect was once a table which held the Ark. Real biblical artifact, just another big rock or something else?

“This would be a rare case in which we can merge the biblical narrative with an archaeological find.”

In a detailed report by Haaretz, Tel Aviv University archaeologist Dr. Zvi Lederman relates the discovery of the remains of a 12th century BCE building on the outskirts of Beth Shemesh, 20 km (12.4 miles) west of Jerusalem. Zvi believes the structure was a temple because it is a perfect square (8.5 meters or 27.8 feet per side) and its corners match the directional points of the compass. Inside the square, his research team found animal bones, concave stones for mixing liquids and other signs of rituals. They also found something which indicated this was a temple which had been trashed by enemies of its users – deep layers of animal dung covering it. (Photos here.)

“Very shortly after it was destroyed, the entire place was turned into an animal pen. To me this is an act of hostility, an intentional desecration of a holy place.” 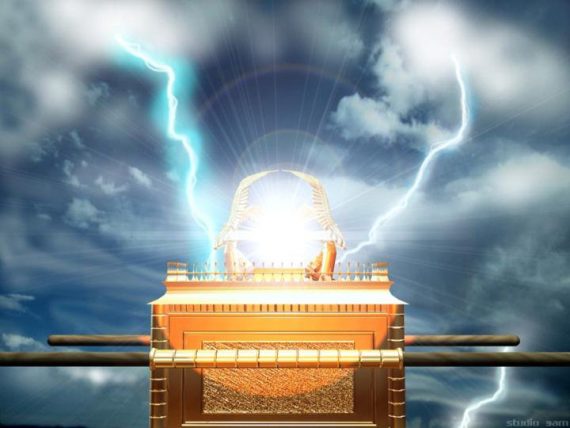 Lederman speculates that the Philistines – archenemies of the Israelites who lived seven km (4.3 miles) from Beth Shemesh – were to blame for this based on the timeframe. However, the severity of the temple’s destruction and desecration was above and beyond that of their their normal skirmishes, so Lederman went looking for a reason. Last summer, his team found it – a large stone slab perched horizontally on two other stone. This was an unusual placement for a pre-Iron Age settlement. For a possible explanation, the scientist turned to the spiritual.

“Now the people of Beth Shemesh were reaping their wheat harvest in the valley; and they lifted their eyes and saw the ark, and rejoiced to see it. Then the cart came into the field of Joshua of Beth Shemesh, and stood there; a large stone was there. So they split the wood of the cart and offered the cows as a burnt offering to the Lord. The Levites took down the ark of the Lord and the chest that was with it, in which were the articles of gold, and put them on the large stone.”

So, the bible says the Ark of the Covenant was in Beth Shemesh after being taken from the nearby Philistines and was placed on a large stone. Do those dots line up with what Lederman found? He points out that the lines aren’t really straight. The stone was found in a temple, not a field. The 12 century BCE time period is centuries before what most experts believe was the beginning of the real historical events that occasionally appear accurately in the bible and often inspire similar stories. Nothing was written about the Ark until the 8th century BCE – a long time for the story of something that important to be confined to word-of-mouth. Avraham Faust, a professor of archaeology at Bar-Ilan University, told Haaretz he believes it’s a sign of an early tradition that eventually inspired an epic biblical story that has inspired searches and Indiana Jones movies.

Could this bring Dr. Jones out of retirement one more time?