War is ever present throughout human history. It is one of the few things that unites our species beyond borders, or beliefs, or religions, that seemingly innate desire to harm and destroy ourselves. History is rife with tales of bloodshed and combat, but it is of special interest here when it pertains to those who would seek to draw upon dark forces we cannot understand to help us fight our battles. An intriguing case comes from the battlefields of the First Civil War of Liberia, in Africa, which would claim hundreds of thousands of lives and spawn one of the greatest monsters humanity has ever produced. He was called General Butt Naked, but despite the ridiculous nickname his is a terrifying and rather tragic story of innocence lost, the toll of war, and of malevolent supernatural demonic powers.

Born September 30, 1971 among the the Sarpo tribe of Liberia, Joshua Milton Blahyi was brought in the world as just another baby, his whole life ahead of him and surrounded by the innocence of youth. As he grew he was just another boy like so many in the world, somewhat rebellious yes, but there was no clue as to the darkness and atrocities that lay ahead on his path into the future. His childhood would diverge from the norm when at the tender age of 11 he was made a tribal priest after an initiation ceremony in the forest. Blahyi would claim that during his initiation ritual he had had a strange and terrifying vision, in which he says the Devil came to him and proclaimed him to be a great warrior who could gain vast supernatural power if only he were to practice cannibalism and perform human sacrifices, and his life would change dramatically after this.

After his initiation, Blahyi would go on to become a spiritual advisor to Liberian President Samuel Doe, and he would get involved as a high priest of a secret cult that practiced black magic, human sacrifice, and worshipped a god called Nyanbe-a-weh, who he believed was actually the Devil. During this time he claims that he regularly talked to the Devil, as well as displaying many supernatural powers, such as invisibility, flight, and immunity to bullets, and he was already accustomed to the sight of blood due to the monthly human sacrifices he helped carry out, but it would not be until civil war came to Liberia that he would truly carve out his legacy as a ruthless, frightening force to be reckoned with, and truly earn his moniker “the most evil man in the world.”

It began when President Doe, who had gained control of the country through a 1980 coup, held an election in 1985 in which he unsurprisingly remained in charge, and which many people considered to be rigged. Doe was not very popular among the people, and it was amid this simmering unrest that a former Liberian government official by the name of Charles Taylor moved in from neighboring Ivory Coast in 1989 with the aim of forcefully seizing control, along with his National Patriotic Front of Liberia (NPFL). This resulted in a fierce civil war, during which time Doe was captured by Taylor in Monrovia and brutally tortured, mutilated, and executed. This did nothing to stop the constant warfare that had engulfed the region, and by the time a ceasefire was reached in 1996 about 250,000 people had been killed, many of these victims forgotten and left to rot where they lie.

At this time throughout much of the early 1990s Liberia was far from a stable state. The country at the time was controlled by various warlords and rebel commanders who constantly fought over resources and turf, in particular the prized diamond fields and gold mines. It was a bloody time of gun battles in the middle of city streets in broad daylight, when life was cheap, and it was in this habitat of destruction and chaos in which Blayhi operated and thrived. During the war, he was part of a mercenary unit that had become affiliated with the powerful Liberian warlord Roosevelt Johnson, and he wasted no time in earning a reputation as one of the most fearless and terrifying commanders any one had ever seen. Blahyi had accrued a ragtag group of followers willing to die for him, many of them children as young as nine and most of whom believed in their leader's claims that he had supernatural powers. Indeed, Blahyi was still convinced that he had regular meetings with the Devil, and that through the eating of human flesh and regular human sacrifices he had acquired vast magical powers that he constantly fueled with blood. He would years later say of this:

I needed to make human sacrifices to appease the said deities, or the gods. Every town I entered they would give me the chance to do my human sacrifices, which included innocent children. Usually it was a small child, someone whose fresh blood would satisfy the devil. Sometimes I would enter under the water where children were playing. I would dive under the water, grab one, carry him under and break his neck. Sometimes I'd cause accidents. Sometimes I'd just slaughter them.

It is quite chilling indeed, a peek into absolute madness and the abyss of human evil. He would perform these sacrifices every time he went into battle, after which he and his forces would feast on the victim’s flesh, cutting the heart up into pieces to pass out among the soldiers. This, they believed, made them fearless and nearly invincible, and Blahyi also would go charging into fights completely naked except for shoes and his gun, as he believed that this protected him from bullets. This would lead to his nickname “General Butt Naked,” and his followers would also either fight naked or in wigs or women’s clothing, rubbing themselves in blood, and they would supplement their “magical powers” with amulets, talismans, and copious amounts of drugs and alcohol. Blayhi would describe a typical pre-battle ritual thusly:

So, before leading my troops into battle, we would get drunk and drugged up, sacrifice a local teenager, drink the blood, then strip down to our shoes and go into battle wearing colorful wigs and carrying the purses we'd looted from civilians. We'd slaughter anyone we saw, chop their heads off and use them as soccer balls. We were nude, fearless, drunk yet strategic. We killed hundreds of people--so many I lost count.

It must have been quite a frightening sight, seeing these naked, blood smeared warriors in their wigs screaming out as their guns blazed and not showing an ounce of fear in the face of certain death. Indeed, there were many accounts of the crew’s terrified adversaries claiming that Blayhi’s men, the Butt Naked Brigade, were really impervious to bullets and that they had super powers like super strength, although how much a role the drugs and superstition played in such accounts is not known. It was clear that the psychological effect that all of this had on the enemy was profound, and there are reports of enemy soldiers retreating at them mere sight of General Butt Naked coming roaring in atop a truck with assault rifle in one hand and some macabre trophy such as a head or genitals in the other, surrounded by his legion of maniacs wearing wigs. 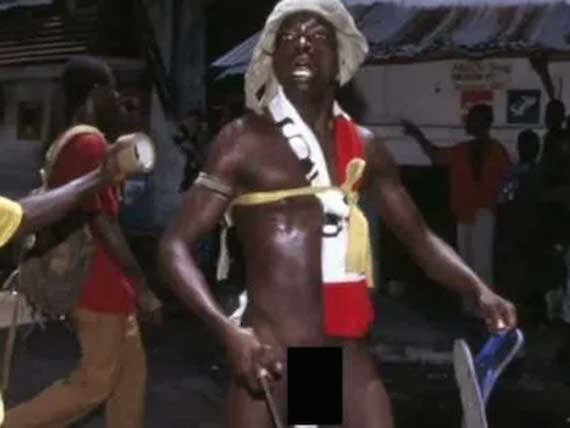 By the time the First Liberian Civil War ended in 1996, Blahyi would claim that he had personally been responsible for at least 20,000 deaths during his rampage of utter mayhem and violence, and it was during one of his last bursts of brutality that his life would change once again. He says that in 1996 he had found himself standing on a bridge after ruthlessly murdering an innocent  young girl and pulling her heart out of her still warm body. As he stood there, blood dripping down his hands and the lifeless heart within his grasp, a vision supposedly appeared to him, of which he has said:

When I looked back, I saw a man standing there. He was so bright, brighter than the sun. He said “Repent and live, or refuse and die.” I wanted to continue fighting, but my mind never left this person—how bright he was, how passionate his words.

This epiphany was enough to make him give up his life of fighting and death altogether, and soon after he left his troops behind and retreated to a refugee camp in Ghana, where he repented for his sins, asked God to strip him of his malicious demonic powers, and became a born again Christian. He would then express remorse at what he had done and take to giving sermons on the street and starting organizations to help reform former soldiers, eventually returning to Liberia to continue his church work and ask his victims’ families for forgiveness. Interestingly, although he has expressed deep remorse for his horrific deeds, he still does not cop complete responsibility, still firmly believing that he was indeed under the influence of the Devil at the time.

When Liberia’s Truth and Reconciliation Commission began going through and charging warlords and war criminals for war crimes in 2007, many of those who were remorseful and had been truthful and cooperative with the investigation were awarded full pardons, among them Blahyi. It is for this reason that, although former Liberian president Charles Taylor was charged with war crimes and sentenced to 50 years in prison by the Hague, the monster Blahyi not only walked free, but is now the President of the End Time Train Evangelistic Ministries Inc., has appeared in countless TV programs and the documentary True Stories: The Redemption of General Butt Naked, and has written numerous books on his experiences. This has not sat right with many, who claim that he is merely a self-promoter who has translated his notoriety from the war into personal gain. Indeed there are those who have even gone so far as to accuse him of exaggerating his misdeeds and inflating his death toll and atrocities as a cash grab in order to gain more fame and sell more books, and there is the notion that his whole turnaround to redemption is one big sham. One journalist named Tina Susman has said of this:

I covered a lot of warlords. After a war is over, they have to reinvent themselves. That’s how they survive. They want something to grab on to, whether they’re regular people looking for a miracle or journalists looking for a good story.

To these accusations, Blahyi has said, “Even now I’m fighting. I’m fighting a spiritual war.” So is this man a villain or a victim? If what he has said in the aftermath of the violence is even halfway true, then regardless of any "demonic influences" he was unequivocally a ruthless monster. We are left to ask what brought him to this? What forces are there roiling about within the human soul that could erupt outwards into such complete, hideous atrocity? It seems that we don't even need the Devil and demonic forces and powers to explain that perhaps we humans ourselves are perfectly capable of creating evil and violence in this world, with no supernatural forces needed.