Some places just seem to have a destiny to be cursed, eerie places permeated by dark lore, and one of these places lies out in the rough seas of the northwest United States. It all begins with a place called Tillamook Rock, just a lone speck of basalt rock jutting out among the wind lashed rough seas a little over a mile off of Oregon’s North Coast. It stands there defiant in the face of the many storms that pass through the area, ever withstanding the gray, roiling ocean and battering waves around it. Its jagged silhouette almost like a specter out there in the fog and ferocious storms lends it a rather otherworldly ambiance, and it is perhaps this that spurred on legends of the Natives of the region that it was a forsaken place prowled by devils and evil spirits. Indeed, it is said that the local tribe would go nowhere near it, and that beneath it were demon haunted tunnels leading down to the murk of the underworld. It is a wind blasted little outcropping with a dark history that has become surrounded by stories of death, curses, and the paranormal right up into modern times.

Whether there were ever any evil spirits there or not, the area where it was located, called Tillamook Head, was nevertheless certainly dangerous, as it posed an ever present threat to the ships that passed through these waters with increasingly frequency. In 1878, the U.S. government decided that the danger the area presented was dire enough that a lighthouse needed to be built upon that slash of forlorn rock, and so plans were put into effect to get the project going. However, Tillamook Rock, which had stood out in that frigid, frothing sea and feared for centuries, would prove to not be so easily tamed. Surveying of the rock began in 1879, and was immediately defied by it. The first to arrive, a master mason by the name of John Trewavas, was tragically swept away by a wave as soon as getting there, his body dragged into the sea to never be found. This was taken as a bad omen for many of the men who were scheduled to work on construction, and coupled with the Native legends about it being an accursed place more than a few of them refused to go to work there, many of them even quitting altogether. Nevertheless, plans to build the lighthouse trudged on, and in 1880 building began in earnest, with men from outside of the area and beyond the influence of spooky stories brought in for the construction work.

Almost immediately there would be setbacks that would further show that this was not a place welcoming to outsiders, when the first construction crew was hopelessly stranded there by a fierce storm that swept away nearly all of their gear and made the seas too dangerous to launch a rescue. The men would be trapped there without food or supplies for nearly two weeks, during which time they would apparently be attacked by sea lions and nearly freeze and starve to death. Even after this incident, frequent storms, constant high winds, unfavorable weather, difficulty making a safe landing, and the sheer steepness of the terrain made construction and the transport of building materials slow-going and constantly met with setbacks. The project would go wildly over schedule, taking an absurd 575 days to complete the modest lighthouse, and the rock would lash out one last time before the structure was completed, when a sailing vessel named the Lupatia was wrecked there in a heavy fog, killing 16 men and sparing only the ship’s dog.

Despite all of this, the lighthouse, by now ominously nicknamed “Terrible Tilly,” was officially opened for operations on January 21, 1881. Considering the bleak working environment and the sheer isolation there upon that menacing rock, it was decided to post four lighthouse keepers at a time in shifts of 42 days on, 21 days off, but even so working there was considered to be somewhat akin to Hell on earth. The cold weather, relentless winds and storms, epic waves, never-ending dampness, and the incessant blaring of the forghorn at all hours took their toll mentally and physically, and to be posted on Tillamook Island was seen as more or less the same as being given a prison sentence. Indeed, it became common that only keepers who had received disciplinary action in the past and who were considered troublemakers were assigned to Terrible Tilly, and to be sent there was the fear of keepers everywhere. Oh, and then there were the ghosts.

Lighthouse keepers who came back from this miserable, inhospitable place often came back with tales of the paranormal, of hearing anomalous footsteps wandering about the building or voices or moaning that could not be explained, and even of being tapped, brushed, or poked by unseen hands. Some of the best accounts of this sort of activity come from a former Coast Guard named James A. Gibbs, who served there for a year and would go on to mention his experiences in the book West Coast Lighthouses: A Pictorial History of the Guiding Lights of the Sea & Tillamook Light. From his first night there he claims he was warned by the other three keepers about the ghosts that prowled the rock, and he experienced this first hand that very evening, when he had quite a bizarre experience. Gibbs would say that he had woken to the sound of disembodied footsteps in his room, and that he had then been overcome with an inexplicable paralysis. He would say:

For some reason, I just couldn’t move. I grew rigid and tried to call out, but the utterances seemed to choke in my throat. After hearing two more steps, I knew that whatever it was, was standing next to my bed. Then came that terrifying moment when something passed near my throat, so close that the breeze fanned my face.

In a very strange sequence of events, it then turned out that there was a goose there in the room with him, which had come through one of the lighthouse’s open porthole windows, although what connection it had is unclear. Gibbs would claim to have experienced other odd things at Tillamook as well, including more footsteps and a moaning sound with origins he could not discern, but the strangest account he gives is of the time he and the other keepers saw a ghost ship pass by on the waves. The ship was apparently a very old fashioned and appeared to be a derelict, with Gibbs giving a rather colorful description of it:

Leaping out of bed and into my pants, I was outside in a flash and "Swede" was waiting for me, all wrought up as if his blood was boiling in his veins. He pointed to the dim outline of a vessel parting the strands of mist less than a quarter of a mile away - its dull gray silhouette blending with the sky and sea and hinting of mystery. Through the glasses one could tell that she was an old steamer that boasted a chronicle of long and hectic years - her seams had opened and the oakum had baked out through a series of summers. Badly hogged, her decks had grown sodden from rain and sea water, and the rigging hung limp from her fore and main masts, like a broken spider web, against the dismal sky. The dingy paint was peeling from her sides, and streaks of rust from iron fittings had left telltale marks. The davits swung empty, the pilot house was partly stove in, and the cabin portholes creaked open and shut with the pulse of the ocean.

This eerie, lifeless ship allegedly drifted aimlessly and dangerously close to the rocks on an imminent collision course before suddenly stopping to a standstill, after which it did a complete turn as if under conscious control and silently headed out back into the inky night. The frightened men apparently reported the sighting to the Coast Guard, but no such ship could be found. The only evidence they had was a piece of debris from the ship that had purportedly washed ashore during the incident, but it was soon reclaimed by the waves after a failed bid by Gibbs to retrieve it nearly killed him. 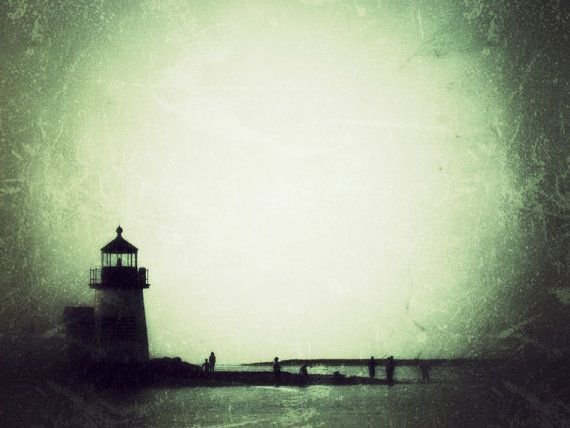 The ghost stories would continue throughout Tillamook Rock’s long career, with the rock supposedly haunted by at least two separate entities, including a former lighthouse keeper who was said to be very malevolent and to not like company, even chasing or attacking people. Even when the lighthouse was closed down in 1957 due to high upkeep costs, the light on the abandoned rock was still said to shine out in the night, even though no one should have been there and it was no longer operational, and this is a strange phenomenon that has supposedly continued to this day. On a creepy side note to the already tumultuous past of Terrible Tilly, in 1980 the rock was used as a columbarium, or a storage house for urns filled with ashes of the dead, collecting over 30 urns in what was called “Eternity at Sea” before it was closed in 1999. The urns are supposedly still there.

In later years Tillamook Rock has become known as a bird sanctuary, considered part of the Oregon Islands National Wildlife Refuge, and is also listed on the National Register of Historic Places, and it is mostly off-limits to all visitors. In years since the ghostly light still reportedly stabs out over the darkened waters, and we are left with quite an unusual place with a strange history and plenty of spooky tales. Is there anything to the odd stories surrounding this isolated, abandoned place? Whatever the case may be, it is a curious historical oddity and an intriguing story of a location forgotten and left to the elements, but perhaps not totally uninhabited, at least by the living.

Rocks are Mysteriously Exploding Off of the Surface of Asteroid Bennu