The Mysterious Case of the Birmingham Poltergeist

Among the most persistent and popular of hauntings are those of poltergeists. Troublemaking paranormal phenomena that often serve to annoy rather than truly threaten, such tales have been around for a very long time, and make us wonder what can be behind it all. Although poltergeist activity is mostly known for being frightening but ultimately harmless, it often graduates to increased levels of intensity, including fires, attacks on people, and other violent behavior. One very strange case comes to us from the United Kingdom, where in a quiet suburban neighborhood there was an apparent poltergeist who rather enjoyed throwing stones, causing destruction, and launching a mystery that has never been solved.

The setting for this odd tale is the quiet, upscale residential neighborhood of Ward End, in Birmingham, England, where in 1981 a group of residents along Thornton Road began experiencing some rather strange phenomena. It began when family members began to hear stones pelted off of the windows, roofs, and doors of their homes, yet looking outside would always show that no one was there. It seemed like an annoying prank at first, but these tossed rocks would get progressively more intense, gathering force over the coming days until they were breaking windows and causing damage to roof tiles, and still there could be found no perpetrator for it all.

The families involved would soon find that they were not alone in their plight, as five households in the same well-defined area had all had the same problem. They took to taking turns on watch duty in an attempt to catch the assumed pranksters in the act, and yet still the stones would come, seeming to materialize out of thin air or be lobbed from the night without any trace of someone standing there. On occasion it seemed to literally rain stones, with pebbles and rocks of all sizes pattering down from the sky above, and there would even be full on assaults, with barrages of stones lasting hours and breaking nearly every pane of glass in the homes. The mysterious stones also exhibited a good amount of accuracy, managing to hit windows without smashing into the house, and sometimes hurtling only through windows in which a person was present, with a new stone coming through a different window in the room to which the target had moved, as if they were being tracked and aimed at.

Indeed, the rocks would sometimes hit the residents to leave behind bruises and welts, and the lack of sleep from it all was taking its toll on their mental and physical health. What had started off as annoying was soon becoming a harrowing ordeal, and the frightened residents even took to erecting barricades around their homes to keep the culprits away, but the rocks would still be flung at the houses with great force, always at night and seemingly most concentrated on houses numbers 32, 34 and 36. They also tried lacing cotton thread around their gardens to see if they would be broken by the attackers, but the threads always remained untouched and unbroken. If this was the work of humans they were being very clever about covering it up.

By now the phenomenon had been occurring for nearly a week, and with no end in sight and no trespassers found who could be responsible the police were notified. Authorities would also assume at first that this had to be the work of vandals, and they agreed to mount round-the-clock surveillance, with cameras set up, including infra-red and motion sensing cameras and image-intensifiers, and even officers camping out in the victims’ yards. Amazingly, the rocks kept coming, with nothing picked up on their fancy equipment and no discernible source for where they could be coming from, with sweeps of the entire area turning up no signs of who could have possibly done it. Making it all even odder still was that no fingerprints could be found on the stones, and many of them were very smooth, clean, and polished like glass for reasons unknown. The police would spend some time trying to get to the bottom of it without success, and the chief officer of the investigation, Chief Inspector Len Turley, was dumbfounded, lamenting:

We have spent more than 1,000 man hours on this case. We have devoted know-how and manpower of major murder hunt proportions. We are not treating it as a game. We are keeping an open mind about the whole thing. We don’t know why it’s gone on for so long. If we even knew the reason for it, we would be one step nearer. 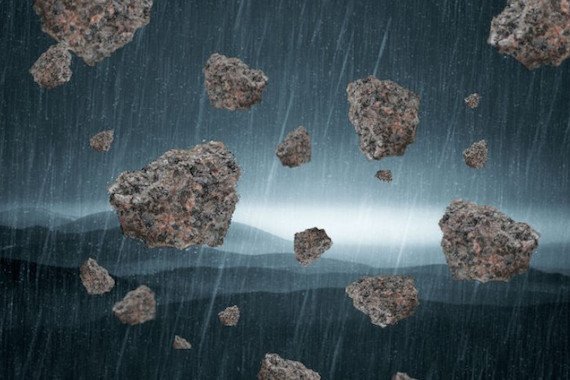 In the meantime, it had gotten so bad that the afflicted residents were reorting to installing chicken wire and corrugated sheeting over windows to keep them from being continuously smashed. By now the bizarre case was making headlines nationwide, with the media calling it “The Thornton Road Poltergeist” and “The Birmingham Poltergeist,” and the incident was even featured on the TV program Arthur C. Clarke's Mysterious World. There was much talk about this being paranormal in nature at the time, and the residents entertained this idea, even calling in a vicar from the local church to take a look around. Nothing out of the ordinary was found, and the attacks continued.

For their part, the police shied away from talk of ghosts, but considering that the culprits constantly evaded them and all attempts to even prove they were there at all, they came up with the idea that the rocks must have been hurled from some distance away with some sort of catapult device. If that were the case, then why did they target just these five houses, how could they be so accurate and intense in their strikes, and what was their motive? No one has a clue, and even ballistics experts at the time doubted that these particular stones could have been flung so far with such accuracy with such a device. In the end, it is a total mystery.

The rock assaults would continue on almost nightly for a full 3 years, during which time the police actively investigated and tried to get to the bottom of it with no success. The families involved had no known enemies, there was never any human activity found, and no one was ever arrested or even considered a suspect for the incidents. Eventually the phenomenon would wind down on its own, and the police basically just shrugged their shoulders and gave the case up. In the end it is unclear what we are really dealing with here. Was this just some pranksters, and if so why did they target this one area for so long even when police were stationed there? Or was this perhaps something else? If so, what was it? No one really knows, and the case of the Birmingham poltergeist remains a curious enigma.