Iceland has long been a place permeated with magic, myth, and a certain sense of otherworldly splendor and the unknown. Here looking out over the sprawling vistas of lava fields and fjords, it sometimes seems only natural that there should be some sort of magical creatures to inhabit it all, and this place does not disappoint. The lore of elves, called álfar, a type of huldufólk in Icelandic, meaning “hidden folk,” including fairies, dwarfs, mountain spirits, trolls, and gnomes, goes deep and stretches back into the mists of time. The mythology on elves in Iceland has its roots in the 10th century, at a time when Norwegian Vikings were first settling these rocky, remote shores, and it was long believed that humans and the elves mostly peacefully co-existed for many centuries, although there are myths of epic battles between humans and elves as well, and it seems to be a tumultuous relationship. Iceland is a country absolutely steeped in legends of elves and other supernatural beings, yet for many in this cold northern nation it is more than just myths and stories, and the strong connection to elf lore and belief that elves are real remain thrumming under Icelandic culture right up into the modern day.

In Iceland it is not particularly uncommon for people to come forward with sightings of real elves, and in one study it was estimated that around 62 % of all Icelanders believe in their existence, while a substantial portion of others has an open mind to the possibility. The belief in what are called “elf stones” is also deeply embedded in the culture and are an extension of this belief. Elf stones are essentially rocks that are said to serve as homes for these supernatural creatures, and it is not uncommon to see them dotting parks or in the yards of homes, where it is seen as taboo to move them or disturb them in any way. Some of them are made into elf altars, with candles placed around them and offerings made to the creatures, and so ingrained in the Icelandic culture is the belief in elf stones that whole construction projects are planned around them and even highways will take detours around particularly well-known stones, and elf activity governs the movements of fishing vessels at times as well.

To build through an area with an Elf Stone is to invite protests from locals, and projects often face delays due to a pesky stone in the way of progress. Indeed, there have been cases in which the stones were moved to cause an uproar and force an apology to the elves from the actual government. Moving the stones is said to bring all manner of misfortune and even death, and even people who don’t believe in elves will usually leave them alone, just in case. In short, Iceland takes its elves very seriously, but perhaps taking it all even more seriously than most is a man named Magnús Skarphéðinsson.

A historian by trade, Skarphéðinsson has researched elves for over 30 years, interviewing more than 900 Icelanders who claim to have had encounters with the creature during that time, even becoming friends with them or entering their homes, and he is widely considered to be one of the foremost experts on Icelandic Elves and their lore. He also happens to run the world's first full-fledged Elf School, or Álfaskólinn, which is an offshoot of the Paranormal Foundation of Iceland. Here at the school, opened in 1991 in Reykjavík, Iceland, Skarphéðinsson gives lectures on the Hidden Folk and holds open forums for people who have had these experiences, all done in a very casual atmosphere where they drink coffee and eat cake, pancakes and waffles in a cozy, rustic room among various bookshelves filled to the brim with leather bound books and numerous trinkets, amulets, and of course elf figurines and other elf-themed items. This might seem like just a little elf chat club, but the school actually means business, with a full curriculum, diplomas, and certificate programs, and there have been around 9,000 people who have come through these doors to earn certificates and diplomas on elf studies, and the school publishes books on the subject as well, although it all started small, with Skarphéðinsson explaining:

People come to me with their stories and they swear to me that they’re not a drunk, they’re not on drugs, and they’re not a pathological liar. I never planned to create the Elf School. As more and more people inquired about my work, I just started telling everyone to come by on Fridays and that’s how it all began.

According to Skarphéðinsson, there are 13 different species of elves inhabiting the cold and often forbidding wilds of Iceland, ranging from just several inches in height up to a few feet, some of them benign and friendly, while others are shy, reclusive, or even malicious. This might raise a few eyebrows, but Skarphéðinsson takes it all very seriously, and indeed does not think of himself as a folklorist, but rather a neutral scientist trying to get to the bottom of these mysteries, and he treats the subject with a reverence, intelligence, and enthusiasm that by all accounts is absolutely infectious. For him this is a very important area of study, and is worthy of looking at in a neutral, open minded manner, of which he has said:

We don’t have a clue why these creatures are pulled back and forth between dimensions. The only thing you can do is to collect all people’s experiences. The only source of information is to find all possible witnesses and ask them in detail: What do they look like? What were they wearing? What is their opinion on God and eternity? Why are they here? There are many things we still don’t know about elves and hidden people. What we do know, we have learned from people who have had decades of friendships with them and have been invited into their homes.

He also believes that Iceland is in a unique position to house elves, because the nontraditional culture and background of the country has made the creatures feel safe to reveal themselves to humans. He says that these beings live in other countries as well, but are more reclusive there, and in his opinion in many ways Iceland’s location, vast swaths of uninhabited or sparsely populated vistas, and the open-mindedness of the people to these beings have come together to create the perfect environment and habitat for the Hidden People, explaining why they are more often seen and encountered here than other areas. However, he also warns that even in Iceland changing attitudes and increasingly turning away from belief in magic is slowly causing the creatures to disappear and go into hiding. He has explained of this:

In other countries, with western scientific arrogance and the denial of everything that they have not discovered themselves, they say that witnesses are subject to hallucinations. We (Iceland) would be living in a totally different society if the Enlightenment had not started in the 1700s. But the Enlightenment had a terrible price. It killed faith. Faith is one of the glues that keep civilization together. Not only did it kill faith, it killed myth. And psychic ability. Many people believe in elves in Iceland because we were isolated. The Enlightenment didn’t come to Iceland until 1941 when the American army invaded Iceland. Then we had the Enlightenment and it began cleaning the elves away. 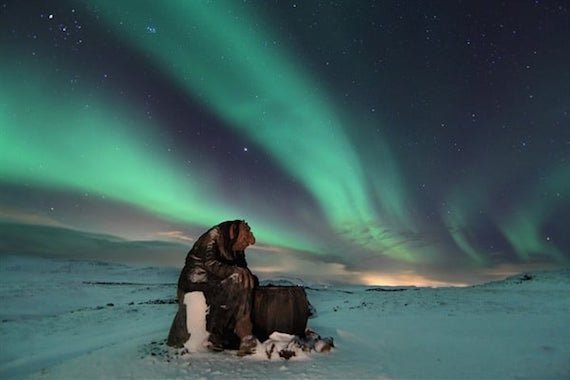 He explains to his students that in a way, it is the modern world and its rigid ways of thinking that have destroyed real magic and the elves along with it. Not simply because the belief and myths have disappeared, but because our modern lives and move away from these ideas have in a sense blinded us to these mysteries revolving around us. One writer Anna Tsui, who actually went and earned the diploma from the Elf School, puts it rather well when she says in an article for Best Health:

The truth is, most people are so conditioned and regimented in their lives that they lose any connection to the greater forces at work. Once we disconnect from magic, we disconnect from grace and the divine. As a result, similar to a flower cut from its roots, our spiritual life force weakens as we lose our connection to nature and the flow of life. We become anxiety ridden and blind to the complex ecosystem that surrounds and supports us.

Essentially, the modern world has pushed these creatures into hiding, according to Skarphéðinsson and his followers. Is that what is going on here, and are these real supernatural beings that are being pushed out into the fringe by the encroaching modern world? Or is it pure legend after all? Whatever one may think, Iceland still manages to pull in plenty of accounts of elves, gnomes, and other "Hidden Folk," and the traditions and at least passing belief in them remain strong here in this far flung northern land. Is there anything to it all, or is this all pure myth and folklore? It seems like the best way to learn about it all for sure is to go give Skarphéðinsson a visit at his school, and perhaps make up your mind when you are done.