Paranormal phenomena come in all shapes and sizes. From ghosts to poltergeists, to everything in between and then some, there is a wide variety of forms these anomalies come to us in. One very curious area of the paranormal is that of ghostly handprints that appear on surfaces to remain resistant to being washed away and taunt us with their mysteries. One remarkable case of these spectral handprints is the story of a Chicago firefighter who predicted his own death, and then went on to leave an indelible handprint from beyond the grave that would baffle and inspire awe for decades.

The odd tale begins back in the 1920s, in the city of Chicago, Illinois, in the United States. Here a man named Francis Leavy worked as a dedicated firefighter with the Chicago Fire Department. He was known as a friendly and mild-mannered man, and was always ready to spring into action and put his life on the line in the service of his city, but things would take on a rather odd atmosphere when his demeanor and personality one day began to change, with him becoming uncommonly morose and withdrawn. This continued until on April 18, 1924 he was reportedly at work maintaining the fire house and washing the windows when he staggered and leaned against one of the windows while breathing heavily. When the other firefighters rushed to see what was wrong, he allegedly murmured between gasps that he had been overcome with the unbearable sensation that he was going to die on that day, and considering that ll color had drained from his face and he was shaking he seemed to really believe it.

This might have seemed to be just a panic attack, related to stress, and with the personality change he had been exhibiting his colleagues assumed that he was having some sort of mental breakdown. Yet, shortly after he uttered these words the call came in for a fire at Curran Hall, which was a four-story building across town. The firefighters jumped into action, gearing up and rushing to the scene with sirens blaring. Little did any of them know that this was to turn out to be a sinister and deadly day for all involved. Arriving at the blaze, the firefighters began their heroic work, but it was soon noticed that this particular fire demonstrated some anomalous properties, such as the flames flowing downward over the stairs, described as almost acting like molten liquid, where it caused some boxes to explode. The flames also seemed to jump around and leap from place to place, almost as if they were under conscious control, and the violent blaze spread far faster than normal because of this. As the firefighters struggled through the morass of smoke and flames, their progress hampered by their lack of breathing apparatuses, the roof began to cave in and smoldering walls started collapsing around them. As the building crumbled down around them, more emergency services were brought in, and within 30 minutes nearly every firefighter in the city had arrived to fight the fire and conduct rescue operations for those trapped within. 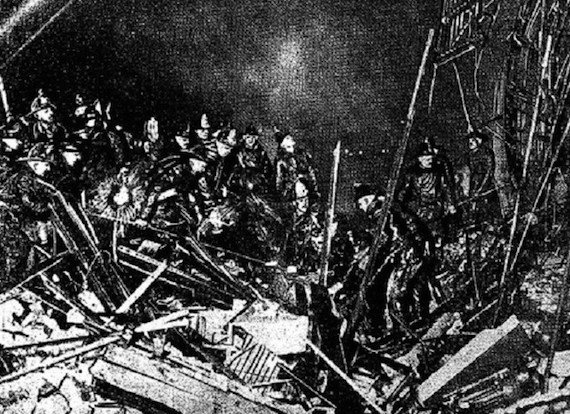 Unfortunately, it was too late for many. The Curran Hall fire would claim the lives of one civilian and nine firefighters, one of these being Francis Leavy, just as he had predicted. It was one of the worst fires in the city’s history, and it was later found out that it had been caused by arson, started by the owners of a sporting goods shop on the lower floors of the building in a bid to collect on insurance money. The reason the fire had acted so strangely and spread so fast was that they had used wood alcohol liberally splashed throughout the building, making it extremely volatile and lethal. The owners of the sporting goods shop would be convicted of arson and murder, but this did not bring back the dead, including Leavy, who left behind a wife and two children.

It was all very tragic, but things would get very odd the next day. One of the firefighters was cleaning up around the station when he noticed something weird on a window. Closer inspection showed it to be what looked like a sooty handprint, but when he went to wipe it off it remained just as clear as ever. Other firefighters came to check it out and they began trying to wash it off, scrubbing it with all manner of cleaning agents and even scraping at it with knives and calling in professional cleaners, but nothing seemed to work and the handprint defied all attempts to remove it. Indeed, it would actually become clearer and more defined the more they tried to get it off, to the point that even the whirls of the fingers could be made out. Making it even odder still was that the firefighters would suddenly come to the realization that this was the exact same window that Leavy had been cleaning when he had made his grim prophecy of his own death. Because of this, it was assumed that this was a ghostly message left behind by the dead man, and so the window was kept there as it was along with its mysterious handprint.

The window and its handprint would remain there at the fire station for the next two decades, attracting much attention and numerous curiosity seekers, until on April 18, 1944 it was accidentally destroyed when a careless paper boy sent a newspaper hurtling through it, shattering the window and breaking its eerie handprint into pieces. In the years since, the story of the mysterious ghostly handprint of Francis Leavy has become a popular tale in Chicago, and there has been much speculation as to what it could all mean or whether it really even happened at all. We do know that Francis Leavy was a real firefighter, and that he did indeed die in the Curran Hall fire, and his badge is even on display at the fire training academy. There are also many descendants of the firefighter who maintain that it is all true, such as one commenter on the site Mysterious Chicago, who says:

This is a true story. I've done research on the Curran Hall Fire, and my great-grandfather was one of the fireman who was killed with Mr. Leavy. There is a photo of Francis Leavy in the Chicago Tribune (page 2, April 19, 1924 issue), and there are photos of the handprint in Fire magazine (Jan 1939 issue). He, along with the others, are recognized on the Chicago Fireman's Memorial, and their badges are on display in the Fire Academy. I've been working on getting the names of the 10 fireman added to the national fireman's memorial. If someone is a descendent of any of the firemen from Curran Hall, they can go to the "National Fallen Firefighters Project Roll Call" website to add their information to be informed of any future plans for recognizing them. This one is very interesting because it also highlights some true Chicago heroes.

There is also at least one supposed photograph of the handprint, so it seems that the tale is at least partially true, and not a complete urban legend. There is the possibility that the handprint was put there intentionally by one of the other firefighters in honor of the fallen Leavy, perhaps painted there, after which he had kept quiet and allowed it to reach its legendary status. However, what if this really was a genuine paranormal phenomenon? If this were true then why would Leavy have put it there and what was its significance? Indeed, what connection does it have to his dark premonition of his own death? We will probably never know, and it remains a curious historical oddity and unsolved mystery.