The Mysterious Hollow Ship: An Alien Encounter in Old Japan?

Reports of alien encounters range across the board, and go back to perhaps ancient times. From numerous disparate cultures come inexplicable reports of encounters with mysterious beings from beyond our understanding, and Japan certainly has some of these as well. One very curious case comes from a group of fishermen who came across a strange craft floating upon the sea, holding within it a curious stranger and which has gone on to become a great Japanese mystery.

Although there are various versions of the alleged encounter, perhaps the most well-known and detailed is that found within the pages of an 1825 manuscript called Toen shōsetsu, by Kyokutei Bakin. The story goes that in February of 1803, a group of fishermen toiling away on the coast of Hitachi province saw something very odd bobbing out on the waves, which appeared to be some sort of bizarre vessel the likes of which none of them had ever seen before. They approached it in their boat and could see that the top of the somewhat disc-shaped object, described as looking like a rice pot or an incense burner, seemed to be made of some sort of reddish wood with windows embedded within it, whereas the bottom was covered with metal plates, the whole of which measured approximately 11 feet high and 18 feet wide. The windows seemed to have metal bars over them, as well as resin coating their edges, perhaps to keep water out. For all appearances it seemed to be some sort of ship, although like nothing they had ever seen and seemingly drifting about aimlessly, and the curious fishermen towed it back to shore.

With the otherworldly craft safely on shore, they were surprised to peer in through one of the windows to see that it was adorned with what looked like a bed, sheets, soft carpets of unknown style and fabric, a bottle, and foods like cake and meat strewn about, and that the walls seemed to have been engraved with various strange symbols or letters from some unknown language. However, more startling than any of this was who they found cowering within, for it seemed the vessel had a passenger. There sitting within the craft in hiding was a young woman of around 18 to 20 years of age, standing around 5 feet tall and described as being strikingly, almost ethereally beautiful, with very pale, pinkish skin and thick red hair laced with white extensions that appeared to be made out of some kind of fur and all peppered with white powder. In her hands she held a simple wooden box that she clutched protectively as the fishermen stared down at her with mouths agape. Her elegant clothes were said to be of an unknown fabric, and were long, flowing, and very smooth like silk.

The fishermen tried to speak to the mysterious woman, but she replied in a strange language they were unable to comprehend, and it seemed as though she could not understand what they said either. Throughout all of this she held that box defensively, not allowing anyone to get anywhere near it. Unable to talk with this stranger and not sure how to proceed, the fishermen supposedly ended up pushing what they called the utsuro-bune, or “hollow ship” back out to sea, where it bobbed off towards the horizon out of sight, leaving the enigmatic woman and the secret contents of that box a complete mystery. When the fishermen went back to their village and told the others, one of the elders speculated that it was a princess from a foreign land who had been banned from her homeland, possibly after having had an affair with a commoner.

The tale of the Utusro-Bune would appear again in the works Hyōryū kishū (1835) and Ume-no-chiri (1844), each time with slightly different details but essentiall telling the same report, and it was over the years printed in several Edo era news sources as well. Similar tales of mysterious strangers appearing by sea in otherworldly vessels can also be found in the lore of other areas of Japan as well, making it seem as though it must surely just be a myth and legend. Yet, even considering the nebulous origins of the story it has sometimes been suggested that this might have been an actual event that really happened, and there have been ideas on what might have occurred here. 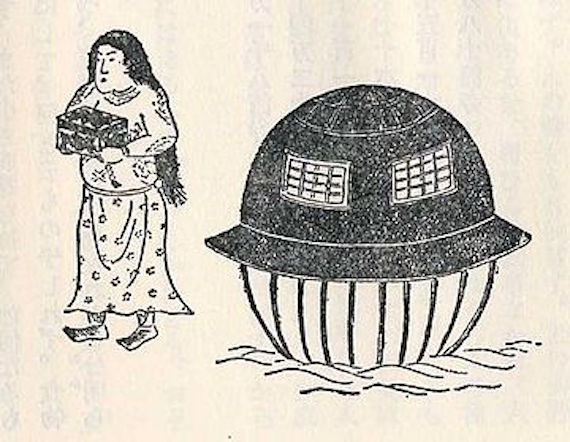 If there was any reality to the tale, one of the main theories on what those fishermen saw was a Russian woman who had either drifted away from a wrecked vessel, or had intentionally come to try and negotiate trade with the then notoriously isolated Japanese or even to spy on them. This would explain her foreign appearance, striking red hair, bizarre clothing, and incomprehensible speech and writing. It also might explain the bizarreness of her craft, as it might have just been a Russian design the Japanese were not familiar with. A more fringe idea is that this was an early example of a UFO and alien encounter in Japan, even though the strange craft is never described as flying or doing anything other than bobbing aimlessly in the water, nor does it exhibit any particularly advanced technology, the windows sealed with tree resin, and the woman is by all descriptions exotic, but human in appearance, yet UFO enthusiasts have often explained this away by saying that it might have been a submersible craft or a crashed UFO.

Of course there is also the idea that this was just a sensationalized, made up account, as were common back in that era. If this had been real, then in this age of Japan’s very strictly controlled borders it would have had to been reported to the Daimyo and proper authorities immediately, yet there is no official record of the incident among the tomes of other reports of shipwrecked sailors and whalers on Japan’s shores. It is also somewhat odd that the story includes just sending the strange woman on her way with no follow-up or opportunity to find her again, making it all rather convenient for anyone who was making it all up. In the end, we are left to wonder what was really going on here. Was this a foreigner finding herself on these shores for purposes we will never understand? Was it just a sensational report and myth building? Or was this perhaps a visitor from much farther away than Russia? The mystery of the Hollow Ship of Japan remains an enigma.

Alcohol Helped Save Our Ancient Ancestors From Extinction