One of the all time great and classic authors of sinister horror and chilling suspense is none other than the famed 19th century author, editor, and poet Edgar Allan Poe. He is today mostly well-known for his macabre and sometimes deranged short stories and detective fiction. Throughout his life he breathed new life into the literary world, his works have become classics, and as legendary as he is, he perhaps needs no introduction. Yet for all he managed to accomplish in life and as famous as he is, perhaps just as odd and sinister as anything he had ever written is his own death, which was in some ways just as strange as anything featured in his fiction.

The years leading up to his untimely demise had been rather hard on Poe. In 1842 his wife contracted tuberculosis and died a few years later, which sent the author into a deep depression. Long known to be married to the bottle and addicted to opiates, he hit the sauce like never before, diving into a spiral of morose despondency and booze that had profound effects on his work and those around him. Somehow through this foggy haze he was able to woo another young lady, a childhood friend by the name of Elmira Shelton, of Richmond, Virginia, and in the summer of 1849 he made his way to Virginia in order to propose to her, after which he would make his way to Philadelphia for the purpose of editing a collection of poems written by a Mrs. St. Leon Loud, upon which he was then due to head back to his home in New York City.

By all accounts he had boarded his train without incident and was well on his way, yet he would not arrive, vanish for nearly a week, and on October 3, 1849, a man appeared in shambles wandering around in a delirious state on a rainy evening outside of a place called Ryan’s Tavern, an Irish pub in Baltimore, Maryland. Most people ignored the inebriated man slumped over in the gutter, and had no idea who it was, walking by to make it someone else’s business as people are wont to do. It was a compositor for the Baltimore Sun by the name of Joseph W. Walker, there in town for the ongoing elections, who was the first to realize just who this poor soul was, seeing that it was none other than Edgar Allan Poe. According to him, Poe was in shambles, wearing clothes that were ill-fitting and did not seem to be his, and in a state of what appeared to be “a state of beastly intoxication.”

A friend of Poe’s by the name of Dr. Joseph E. Snodgrass was contacted, and when he made his way out to Baltimore he found the then 40-year-old great author in a rather rough state indeed. He would claim that Poe was “repulsive,” with unkempt hair, a haggard appearance, and ensconced within filthy, stinking second hand clothes several sizes too large, as well as unpolished, scuffed up shoes, all very out of character for the normally impeccably dressed author. The man himself was in some sort of trance, unable to really respond to any questions and moaning and gurgling incomprehensibly. He was completely unable to explain how he had come to be in this state, why he was wearing clothes that did not appear to be his, or indeed why he was even in Baltimore at all, as it had not been in any way part of his itinerary.

The very ill Poe was taken to Washington College Hospital, where he was thrown into a caged room for drunks akin to a prison, were he remained languishing in his incoherent and rambling state. Here he was attended to by a physician by the name of Dr. John Joseph Moran, and over the next four days he was apparently at the whim of recurring episodes of delirium, meaningless rambling, and profound hallucinations. Nothing he said was really understandable, except for his constant calls for a person named “Reynolds,” although no one had the slightest idea of who this could be. Throughout all of this, Poe was denied any visitors, and when he finally expired on October 7, 1849, he did so solely in the company of Moran, apparently making another round of pleas to the mysterious Reynolds before dying. 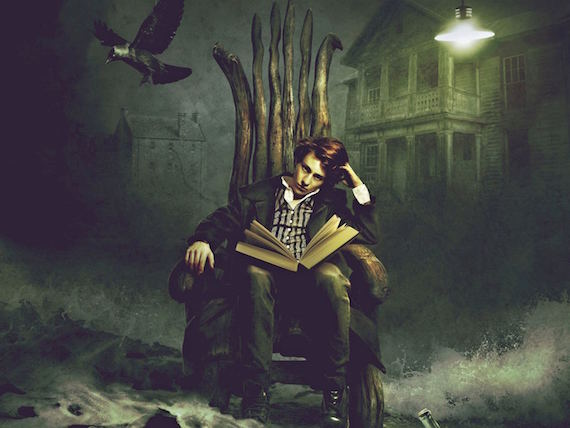 The alleged official death certificate listed his death as due to a congestion of the brain, but considering the strange circumstances surrounding it all and Poe’s calls for the mysterious “Reynolds,” as well as the fact that no remaining death certificate remains, there has been much speculation on what really happened. The name “Reynolds” has often been speculated as being Jeremiah N. Reynolds, a newspaper editor and explorer who Poe had known, or maybe Henry R. Reynolds, one of the judges overseeing the Fourth Ward Polls at Ryan's Tavern, although why he should be calling out this name on his death bed is anyone’s guess. As to how exactly he died, well, that has been intensely debated ever since.

There have been many ideas on how Poe came to be in that sad, disheveled state to die in a lonely state of mad delirium. One is that he had simply gotten drunk and then gotten into a fight that had left him a bit the worse for wear. It has also been suggested that he simply died from drinking too much, as it was often said that he had no tolerance for alcohol, despite his propensity for drinking, yet in the months before his death he had sworn off alcohol altogether, a firm believer in the temperance movement. However, it is thought that he may have perhaps had a lapse and then perhaps overdid it beyond his physical abilities to handle it. That still doesn’t explain where he had been for those missing 5 days during which his whereabouts were unknown. It is also worth noting that analysis of Poe’s hair in later years has shown that he had most likely been sober when he died.

So what, then? Another idea is that he fell victim to a nefarious practice known as “cooping,” a type of voter fraud in which gangs hired by politicians would fan out to kidnap or intimidate society’s undesirables in order to force them to vote one way or another, usually made to vote more than once for a particular candidate under different disguises and identities. This might explain the ill-fitting clothes and his proximity to a voting station that just happened to be notorious for the practice, as well as his intoxication, as it was known for coopers to ply their victims with copious alcohol, but it still doesn’t explain where Poe was for those five missing days, or why he was even there to begin with. Other ideas run the range, covering everything from brain lesions, to tuberculosis, leprosy, carbon monoxide poisoning, mercury poisoning, syphilis, cholera, influenza, brain cancer, or even rabies or suicide, but with no surviving medical records or even records of his hospitalization, and only the word of Morgan, the only physician there in his final hours, there is no way at all to know for sure. In the end, we don't know why he was gone for 5 days, why he ended up in Baltimore, or what caused him to end up stumbling about in clothes that were not his spewing nonsense. No records remain of his hospitalization or his death, and it will probably remain a mystery for a long time to come.

Haunted Hotel In Wales Has Its Own Christmas Ghost